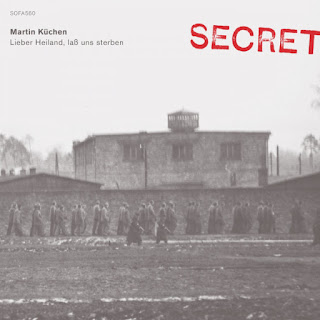 Martin Küchen is among the most thoughtful of saxophonists. His solo work often involves thematic content and one suspects he deeply considers his approaches to that content, even as (I imagine) a good portion of the actual playing is improvised.

The title translates as "Dear Saviour, let us die" and the cover image is a photo taken at the Jaworzno concentration camp in Poland, a sub-camp of Auschwitz. While used by the Nazis in the final two years of WWII, it was also subsequently utilized by the Soviet Union under Stalin as well as the People's Republic of Poland to incarcerate, and often kill, ethnic Germans, dissident Poles and Ukranians and other "enemies of the state" until 1956. The death toll there is estimated at almost 7,000. The photo was taken in 1951 by a member of the UK Embassy and classified as "Secret".

In addition to his alto and baritone saxophones, Küchen employs radio, iPod, electric tambura and speakers. He also overdubs on two tracks, including the haunting title piece that opens the recording. Mixing breath and spittle tones with soft, descending laments, it's a ghostly dirge fitting in perfectly with the cover image--very moving. 'Music to Silence Music', for solo alto, interpolates low key pops with various quiet but extreme sounds, evoking (to these ears) a kind of forlorn resignation, a muted cry. Both of these pieces are fairly short, offering dark glimpses into the setting. 'Purcell in the Eternal Deir Yassin' (Deir Yassin was a 1948 massacre of over 100 Palestinians by Zionist forces) begins with the surprising sound of a tambura soon joined by a fluttering saxophone that, indeed, seems to refer to Indian singing or string playing in the alap portion of a raga. The immersive feeling is wonderful, the pale flutters like pigeons in the recesses of a large, dim chamber. Eventually, one discerns a faint voice, female, emerging  from the shadows (presumably Purcell, though I'm not adept enough to identify it positively--'Dido and Aeneas'?). It's like a response or a summoning, beautifully underplayed, the spirit circling around the edges, becoming more or less distinct, wavering. A fantastic piece.

Side B (I have the LP; it's also available as a cd) picks up in an adjacent space with 'Ruf Zu Mir, Bezprizorni...'. Bezprizorni is a term for street children or waifs who were often imprisoned for "crimes" of survival, such as stealing food. There's a calm, stately piano being played, somewhat distantly, beneath a more anguished, though still fairly quiet saxophone. You imagine one of those children peering into a well-lit, wealthy household from the cold, bleak street. The final track, 'Atem Choir', for six overdubbed "saxophone voices", starts with sparse, hollow puffs--again, I get a sense of coldness, of blowing into one's hands to keep warm. Küchen's restraint is very impressive here; listeners familiar with previous, exceptional work of his like 'Hellstorm' (Mathka, 2012) might be surprised. The breaths mass a bit, dissemble, subside into nothingness--just a stunning piece, superbly controlled though full of sublimated emotion. There's clearly death in the air. In what strikes me as a minor misstep, Küchen closes the longish piece with a church bell tolling a single, repeated note--maybe a bit heavy-handed. But it's a minor quibble on a deep, respectful and bitter look at a horrible piece of history. [After posting, I was informed by Martin that the bells in question appeared outside the space in which the recording was being made, just after the last saxophone part was recorded. So it was a serendipitous event that he chose to retain.]