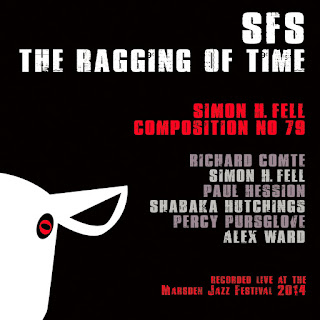 Toward the end of the 80s, I was becoming increasingly disgruntled with what I perceived as the lack of new ideas and energy in jazz. Having cut my teeth, since 1972 or so, on the AACM, JCOA and offshoots and other amazing individuals and organizations, I was hearing a kind of stultification setting in, a complacency of sorts. Sure there were still the occasional bursts of excitement and creativity--I still think of Anthony Braxton's notion to have his quartet interpolate entirely other compositions at will to be the last "great" idea in jazz--but more and more it seemed that musicians were treading water. The raw creativity heard in, say, Roscoe Mitchell in 1968, seemed to be a thing of the past. I cast around, of course, finding temporary solace in the burgeoning downtown New York City scene, whose sizzle pretty much evaporated within a decade (and scarce little of which I can return to these days without grimacing) but was always on the lookout for solution to the dilemma I perceived. For a while one such might have been the combination of solid, Mingusian themes and arrangements with free soloing and more expansive structures. I'd been a big fan of the Willem Breuker Kollektief since seeing them several times at Environ in 1977 or '78 but by 1985, their shtick had begun to wear very thin. Bands led by Henry Threadgill, Olu Dara and, to a lesser extent, David Murray made things click for a few years but those too eventually succumbed to a kind of laurel-resting torpor (though, of course, many would disagree).

I'm guessing it was in the review section of Cadence or possibly Coda that I first came across the mention of Simon H. Fell and, if I'm remembering correctly, those write-ups cited Fell's use of robust structures (Mingus' name was certainly invoked) integrated with aspects of free playing from the European school, another area I'd begun reinvestigating since more or less abandoning it in the mid-70s in favor of AACM and other American jazz avant approaches. It seemed to me a possible source of new and exciting work so, around 1986, I ordered Fell's Compilation I on the Bruce's Fingers label (I'd get Compilation II a few years later). I've long since given away almost all of my vinyl and no one's seen fit to upload music from either of these recordings as near as I can tell, so I can't say with any exactitude but recollect that I was hot and cold on the recordings, enjoying some portions the more robust and bluesier it got, finding other parts too cleanly abstract (in the "standard" British free-improvising sense), a bit oil and water, though overall my response was positive (see All Music reviews here and here). His band, Persuasion A and their release, "Two Steps to Easier Breathing" (1988) struck me as much more successful, ably drawing on South African musical traditions. Things were quiet on the Fell front until the late 90s when my friend and Cadence critic Walter Horn wouldn't stop proselytizing about "Composition no. 30" (1998, also on Bruce's Fingers), a 2-CD set for a big band of some thirty musicians (including several whose work I would devour in upcoming years, like Mark Wastell, Rhodri Davies and John Butcher). Once again, my reaction was mixed, enjoying some parts while finding others overly arid, though I began to get the sense that this was precisely what Fell was after and that, simply put, his aesthetic interests were somewhat different than my own, especially as I grew more and more disenchanted with new jazz, and so it went.

My next encounters with Fell came from a very different direction, however. I forget which arrived first but in any case, they were in the forms of IST (with Davies and Wastell, also the sole context in which I've seen Fell perform live, at Tonic in the early oughts; more on that below) and VHF (with Graham Halliwell and Simon Vincent) on the very first recording issued by Erstwhile in 1999. Along with groups like Polwechsel and Sugimoto's "Opposite", VHF was very significant for me, gradually laying open the world of "quiet improv"; I recall spending many an hour listening to it, listening in a different way than I had before, unpeeling translucent layers on each go-round. IST was slightly different, still having half a foot in the efi tradition; I'd love to hear that Tonic show again, curious if there was a divide between the harp and cello and Fell's bass. I was sitting directly in front of Fell and he put on a mighty performance--I found myself worrying several times that he might injure himself, including when he stuck the fingers of one hand under the bass strings and bowed atop both and when, his hands otherwise occupied, he used his left ear, rather forcefully, to depress strings on the fingerboard.

In the intervening years, I've only come across Fell's work sporadically, most recently in a pure improv context on Confront releases of older material with Derek Bailey and IST. Receiving the disc in question today brought back all of the above memories and having shortly thereafter serendipitously met Fell in Huddersfield and engaged in an all too brief conversation, I was intrigued to hear the latest in his compositional series, No. 79, "The Ragging of Time". And, dammit, I find myself having the same issues...

Some context. The work was presented as part of the Marsden Jazz Festival of 2014 and some thought was apparently given to commemorating the onset of World War I. I take it that John Quall, the festival's producer, more or less commissioned the piece, understanding that the date was roughly contemporaneous with the first jazz recordings and that Fell would incorporate thematic material from the time with contemporary sounds, restoring "the birthright of early jazz to make those traditional sounds new, to make them shocking, to make them the 'Devil's music' as it was once before." A tall order, indeed, but one that could, as far as I could glean from those 80s-90s recording of Fell's, fit comfortably into the structures established back then. Fell assembled a very strong sextet whose instrumentation referred to common ensembles of the era (Percy Pursglove, trumpet; Alex Ward, clarinet; Shabaka Hutchings, bass clarinet; Richard Comte, guitar; Fell, double bass; Paul Hession, drum set) and had at it.

The work is in three sections and the band immediately launches into a Morton-esque theme, bouncy and reasonably convincing, before quickly veering into a free improvisation featuring some blistering clarinet work from Ward. In microcosm, this is the model in use throughout: areas of thematic material interlaced or overlaid with a fairly aggressive but not atypical (within efi) improvised section, sometimes with written lines traced in the background, recalling (for me) a strategy used by Braxton among others. Different attacks and groupings are apparently scored with exactitude as the shifts within a given section are crisp and finely contrasting. All of the playing is first rate, especially Ward and Hutchings (the latter a name new to me) and I guess if you listen to the music from a post-Bailey, etc. point of view, you'll be well satisfied. I find it impossible to ignore the framing, however, and wonder about the reasons (aside from its seeming commissioned origins) to construct things this way. I mentioned the Breuker Kollektief above and there's something similar in structure here (albeit without the goofy humor and typically isolated solo turns, though the latter appears once or twice). As said, I have an affinity for much of that work up to a point, but that point was reached in the mid-80s and is difficult for me to regenerate enthusiasm thirty years on even if allowing for the fact--and I think this is decidedly the case--that Fell's group is more serious and committed. I think I would have far preferred it had no overt references to early jazz been made, instead touching on the matter more obliquely as occurs in the lovely three horn section toward the end of part one. On the other hand, the themes themselves, especially that from the second "movement", are extremely attractive and tastily arranged, as is a lovely secondary theme introduced about halfway through. It's simply something about the juxtaposition that bothers me, that oil and water thing. Shocking? No, not at all, just not integrated in a way I found engaging.

But still...as much as this general language isn't something I'm too keen on nowadays and as much as I have issues with the (to me) forced confluence of styles, there's a decent portion of music that's simply exciting, even thrilling (for example a section beginning some five minutes into the third track). It is reminiscent of past musics, though these connections are likely more on my part than Fell's. I pick up a bit of John Carter now and then, for example, not a bad point of reference at all. And to be sure, those listeners with less of a bone to pick with this school of free improv will (and should) ignore my quibbles entirely and dig in; they'll have a great time and experience work at a very high level.

(While writing this piece, I found a wonderful video of Fell playing solo. There's an enormous amount of subtlety and beauty going on here. It's more in accord with where my focus is these days and has me hoping that, at least, he one day creates a bridge of sorts between this approach and his ensemble work. Perhaps he has and I'm simply ignorant of it.)

If I only repeat myself every ten years, I figure I'm ahead of the game.