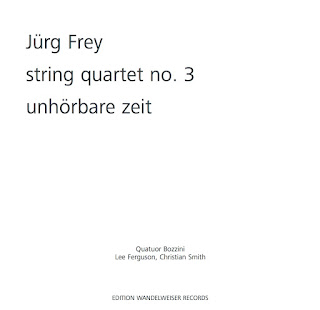 What to say? Two works, Frey's third string quartet (2010-2014) and a piece for string quartet and two percussionists (2004-2006), with Quatuor Bozzini on each, assisted by Lee Ferguson and Christian Smith on the latter.

I get the impression that if you half-listened to the string quartet, you might get the impression of stasis and self-similarity though nothing could be further from the truth. In his notes, Frey compares it to "the silence of a square, a room, a wall or a landscape" and that gets to the heart of the matter--one merely has to listen the way one can simply and deeply observe a wall to perceive not just the variations but the progressions, the story even. Recent releases from Frey have varied between the surprising melodic lushness heard on the Musiques Suisses recording and the grayer, more austere approach heard on "Grizzana" (Another Timbre), both of which I love deeply. The two works here strike me as somewhere between; more accurately, ranging from one boundary to another, and much else besides.

The string quartet is deceptive. On my first listen to the disc, it was "unhörbare zeit" that grabbed me but upon repeated listenings, it was clear how much I was missing in this piece. It begins with single whole note chords, grainy and exquisite, separated by a brief rest, in a calm sequence that has a little bit of a back and forth quality. After three minutes, the single notes separate into pairs, retaining the initial serenity. Back to single notes for a short time, then back to pairs, the tones acquiring a more worried and tense quality though the pacing remains the same. It subtly shifts into groups of four chords some 6 1/2 minutes in, sadder now. The emotional tinges throughout are always changing. Frey may object, but I hear a kind of narrative thread, finding myself in the mind of someone taking a long, quiet walk, perhaps remembering a friend recently lost, the highs and lows. This is encouraged by the fact that one hears (especially when listening on headphones) the breathing of some of the musicians as well as other non-instrumental sounds. Whether intentional or not, it acts to personalize the setting quite beautifully. The chords are attenuated, thinned to whispery lines, almost weeping, their sequencing becoming sparser, the spaces between lines lengthening a bit, before richer tonalities emerge. About halfway in, the mood becomes languorous and, dare I say, hopeful. The comparison may not be apposite, but I found myself thinking that this is the kind of music that, a few decades back, I hoped Gavin Bryars would write. But this is more profound, lush while retaining the requisite trace of bitterness. In the meantime, the pacing, while never disappearing, has become more blurred--there are many things happening throughout and I hear different aspects each time I listen. The music becomes more hushed, still richer and deeply grained, but barely stirring, longish lines wafting one by one through the air in the room like breath in the cold. In the end, the "walk" resumes, with more a sense of the inevitableness of loss combined with moving onward. A stunning, truly moving work, my favorite piece of composed music in quite a while.

Which is not to slight "unhörbare zeit", which is sumptuous as well and, indeed, in some ways is not so dissimilar. The added percussion provides a fertile layer of sound, hear dark and rumbling there softly jangling. Again, the pacing is calm and steady, individual "blocks" of sound looming into audibility, evanescing. If I can extend or at least refer to the imagery the first piece conjured in my head, understanding that I may be imputing too much, one difference might be that this work is more purely sound-concerned and less emotionally suffused. Still, the somberness of, say, the heavy but hollow, low percussion blows, sounding singly against string bowing that as become less regular, more fragmented, carries a dark intensity of its own. The world is bleaker, more concerned with the immediate environment than memories. There's some amazing music herein, though, including a set of chords late in the piece that sound for all the world like accordions, baffling me and lending a slightly queasy air to the conclusion of the work, very unsettling and effective.

Fantastic music, in any case. For anyone at all partial to Frey's work, it's an automatic. Personally, it's my favorite recording of composed music heard in 2015, possibly for longer than that.