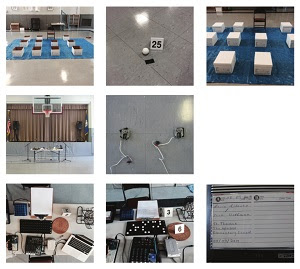 In a previous post, I mentioned the group of sets heard at AMPLIFY:exploratory that, as a whole, I found more interesting in approach, all of which involved Graham Lambkin and Taku Unami. Unami, here and in his 2011 visit, seems to come prepared with one basic idea which he iterates during all or most of the sets in which he's involved. This time it was fans, floor level and standing, employed both for the movement and noises they created on their own (sometimes interacting with each other) and their effect on garbage bags and the occasional small cardboard box. He also engaged in a little bit of surprising but very apt piano playing as well as wielding an electronic device or two. The festival opened with Unami and Sean Meehan, the latter playing (I think--he was seated on the floor and my view was entirely blocked) a set of bells. It was lovely and very quiet, the fans whirring softly, sometimes, by virtue of their rotational abilities, jangling against each other, blowing the green/black bags in a hushed rustle. There was plenty of silence and, several times, this was broken by an unexpectedly brilliant bell cascade. Really nice, made me want to hear a festival in which Meehan played in every set. But it also signaled that "other" path, the one more oriented on actions than musicality. In some ways, this dichotomy was expressed at its most extreme within the confines of a single set later that evening with Lambkin and Michael Pisaro, who more or less reproduced the ambience from their prior release on Erstwhile, "Schwarze Riesenfalter", Pisaro possibly playing some of the same piano chords heard therein, I'm not certain. Lambkin, however, apparently under the influence of sundry substances, delivered a performance that was in some ways truly dangerous; he seemed to walk a thin line between control and recklessness (but always, as ever, deeply and oddly musical!), breaking a glass candle here, toppling a mic stand there, threatening to lift a massive speaker and do who knows what. Pisaro, calm as ever, negotiated these events wonderfully, incorporating them into the overall structure even while being wrestled bodily. It was a thrilling set, at least partially because of the utter lack of predictability involved.

I confess, writing more than a month later, that I've forgotten most of the details of the Lambkin/Unami collaboration. There were fans and bags, of course, as well as more piano from Unami. Lambkin was in greater control. I have an odd sense of enjoyment though, for the life of me, I can't recall specifics! Ah well....

Unami played three sets during the festival, his final with Devin DiSanto. The bulk of the idea seems to me to have been DiSanto's (implicitly borne out by his activity on the "Three Exercises" recording) with Unami adding "commentary", but I could be wrong. In any case, it resulted in perhaps my favorite set of the weekend. DiSanto was seated at a table with a monitor and other equipment, the image from the monitor's screen projected on the wall behind him. Unami sat crouched in a corner delivering electronic sounds that conveyed a vaguely Japanese science fiction film feeling, an interesting tinge but not distracting from the action center stage. There, DiSanto, his chiseled face, slicked back hair and white shirt buttoned to the collar inevitably evoking Kyle McLachlan and thereby imbuing the affair with Lynchian overtones, engaged in a Personal Assessment test. I'm guessing from his demeanor that despite knowing the general parameters of the test, he wasn't aware of the specific questions. In any event, he pretty much maintained a straightforward, non-overtly ironic approach, patiently answering questions to the extent he could (there was an "Uncertain" button which was pushed once in a while, rather amusingly). It was funny, sure, but I had the impression that DiSanto has a deep fascination with these kind of tests, with their tenuous association with reality, etc. I found it absorbing to experience as well as a bit uncomfortable in the invasion-of-privacy sense. Granted that there are many precedents for this kind of performance activity, from Fluxus and beyond, but still it's rare enough in my experience to remain stimulating and thought-provoking.

While I assume that the contributions of DiSanto and Hoffman to the recording in question were more or less equal, the cover photos indicate a situation that has the former's name written all over it. In fact, it cries out for a video so one can get an idea of what's occurring. Nonetheless, my favorite aspect of it is the sheer immediacy one feels, of being palpably inside this room, this school gymnasium (?) while all the baffling activity is taking place. It seems to be presented quite matter-of-factly, from beginning to end though I wouldn't be surprised if there was a decent amount of post-production collaging (as with the Parks/Rossetto release, all credit due to Joe Panzner's mastering). It begins ("preparation/introduction") with several minutes of the sounds of the room, various clicks and bangs as things are placed on tables or floors, the people involved are shuffling around, talking, tape is being pulled, etc. Very transparent and mysterious at the same time. The piece is indeed introduced and commences with a short roar. Throughout, there are interjections like this, sequences of a more "musical" nature but the bulk of the recording isn't so far from it's first section, except that instead of preparing the field, certain designated activities are taking place within it. One senses a kind of system, opaque as it is. DiSanto saying, "...paper. Two: deer. Three: pier. Four: read." (or "dear", "peer", "reed"?), talk of placing numbers near ping pong balls and what sounds like an excerpt from a Bingo game all speak to processes ranging from arcane to banal. Descriptions of activity are heard, subdued and grainy, by male and female voices. Whatever the process is, it's always apparent, a strong sense of steps being taken. Sonically, it's like a hyper-concentrated Ferrari piece, relaxed and seemingly "true" but suffused with purpose. It sounds pretty spectacular, which at the end of the day, is enough. On second thought, I'd probably rather not see a video, preferring to conjure up my own images and explanations.

Fine work and exemplary of the kind of approach I found so invigorating at the festival.


Nice write-up on what's been a 2015 favorite for me. Best quote from Devin about "Three Exercises":

"It was a great experience. I had fun playing basketball when we weren’t recording."