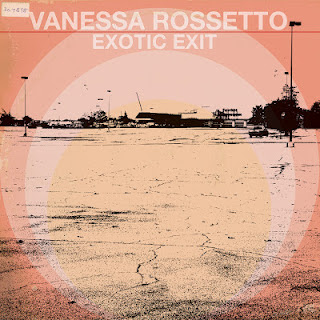 Bazooka-pink vinyl (first 100 copies, anyway), label pink with an orange tinge bearing silver block lettering, this is a scrumptious object indeed, imbued with another several slabs of what seems to be an unending stream of choice music from our favorite Austin-based violist/assemblagist (?). Three tracks, fairly short but each delectable though, like much fine music in this area, difficult to put one's finger on as to why it tastes so good...

If there's any viola to be found it's well camouflaged. Instead we're treated to very densely confected but really very airy pieces, compiled,it seems, largely from taped and electronic sounds. The first, "exotic exit", the words spoken by an accented woman apparently giving pronunciation lessons involving the "ex" phoneme, layers birds, whistling metals, faraway vocal-like intonations, all and more entwined in an impossible-to-decipher cord, yet it floats on air. It's kind of a steady-state work--just goes until it's done, but it's awfully sweet. "348315" (presumedly a cousin to the 307898 faux sticker on the front of the album) is the winning ticket announced shortly after the piece has begun, and soon mutates into a huge (but again, light) eddy, filled with striations, having something of a tinge of Terry Riley circa "Mescalin Mix" but far more variegated. As with the first track, it aims at a point in space and arrives there, no fuss (but much complexity).

Side B's "de trop" expands the palette immediately into more vibrant areas, also more violent ones. As with the previous work, there's a kind of throb in effect, in swirling iteration, but the tones atop it are more metallic and ringing and, as well, it's as though someone heaved a back hoe full of trash into the mixer for a good spell, a wonderful sound. Again the levels proliferate--birds return, multiple layers of taps and scrapes, woolly reverberances. Sheaves of "I'm so tired"'s arrive, melting into another repetitive pattern, muted bells this time, that forms a spine beneath tons of raging wind-like noise,gentle clicks providing a marvelous sense of plastic space within the storm. A huge, surging machine is developed and it rampages for a few moments until the plug is pulled and it begins to lurch sideways, only to careen into a hyper-rich organ chord...well, you get the picture. It's an inspiring balancing act, listening to Rossetto keep this near kitchen-sink approach spinning, but she certainly does. It continues to spin, acquiring a dreamy feel, voices emerging and receding, the organ returning, splendiferous, tossed on a busy highway at the very end.

A supremely rich, hugely enjoyable recording, possibly the best yet from Rossetto. Listen.