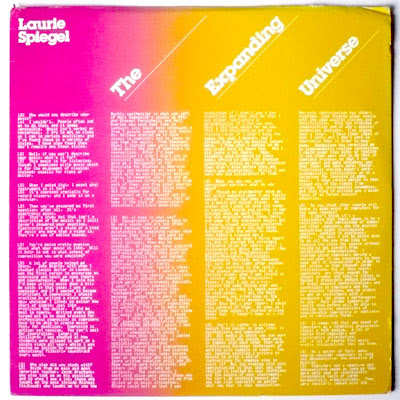 I remember, around 1973, being quite enthralled by a release form Roger Powell called, um, "Cosmic Furnace". All electronic keyboards, I think, very propulsively spacey, for lack of a better term. Produced by Todd Rundgren, I think. I'd heard Terry Riley's "A Rainbow in Curved Air" and, to my innocent ears, it seemed to fit right in. Well, it's candy-coatedness soon, I'm happy to say, wore thin; in recent years I've dredged it up on You Tube for some enjoyable nostalgia. Now I'm wondering how aware he may have been of Laurie Spiegel's work which is, I hasten to add, much better. Unseen Worlds has resurrected another set of classic work, from 1974-76, some of which had been released on Philo in 1980 but much of it, if I'm not mistaken, previously unissued.

It's a bubbly, fun ride as Spiegel's round, exuberant synth tones cascade in endless washes of cross-rhythms, motoric like a psychedelicized Bach, bleating and splatting merrily. Sometimes a track like "Drums", which contains tonalities that sound like a ramped-up Mazda Marimba and rhythms out of West Africa, stands apart and is a welcome tonic, an exhilarating work, but by and large, the pieces splay out languidly, quite pleasant if somewhat...hmmm...I think the passage of time, during which we've heard quasi-similar music used, say, as a soundtrack for a PBS Nova telecast, has caused some difficulty in hearing Spiegel's work afresh. It's really very good in its own world and I'd strongly urge those with an interest here to pick up this set but personally, a kind of sameness creeps in, a blissed-out sense od easily achieved joy that I can only appreciate in smaller doses.

Your mileage may vary substantially. I can easily see many people losing themselves entirely here. 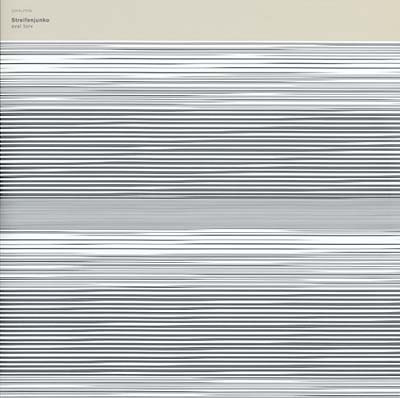 A double LP from the Norwegian duo of Espen Reinertsen (tenor saxophone) and Eivind Lønning (trumpet) who readers may recall from the quintet Koboku Senju (cover image by Kjell Bjørgeengen, btw). As with that ensemble, the music here seems to be at least semi-composed and doesn't shy away from pleasing tonalities and odd, if non-insistent rhythms. Indeed, the tonal range is one of the chief attractions here, the pair using extended techniques throughout though generally refraining from treading in what would generally be considered the harsher realms of same. I find my reaction to be similar here as it was to Koboku Senju: I'd fairly often find myself lulled into an enjoyable kind of haze but, after all was said and done, I'd like to have been jostled a bit more, challenged. Still, an entirely listenable project, music that could be just the thing for a contemplative evening.