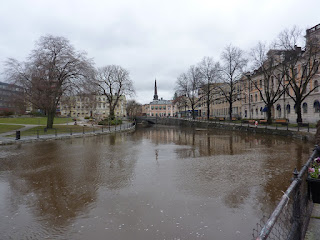 so, a brief report from Västerås, as we prepare to make the journey to England...The festival, like pretty much all such events, had its highs and lows vis a vis performances. But I want to say up front how enjoyable the affair was as such. Very well run, competent while remaining relaxed and friendly, self-contained, good venues, etc. Really a classily handled job.

I just wanted to briefly mention my special favorite performances from the two-day fest. One surprise (in the sense that I'd no expectations going in) was Tima Teshu, from St. Petersburg, early on the first day, in a gallery at the local art Museum. As one entered, one saw Ms. Teshu seated gallery-center, resting on a small box, not acknowledging the crowd. Arrayed before her were six or seven bottles of perfume, an old portable record player and an old, small speaker. She rose and placed the needle on an ancient RCA Victor disc whereupon a sentimental (though rather lovely) accordion-led waltz emerged. It played through, three or four minutes, ended with a rough *click* form the player. Teshu stood, selected a perfume, slowly walked to a corner of the room and sprayed once or twice. As the scent drifted to the olfactory globes of the attendees, she returned to her perch and spun the recording once more. This sequence was performed three times, after which she calmly and quietly returned the vials to the case upon which she'd been sitting (I liked the fact that not all were used) and unhurriedly walked out of the gallery. Something odd and marvelous and concise about the performance; it stayed with me throughout the fest.

On the first day, the standout performance came from Birgit Ulher and Andrea Neumann. On the preceding night, at a get-together party at the home of Johan and Lina Redin, Birgit had graced us with a fantastic solo piece (as had Katt Hernandez) and she elaborated on those ideas here. There were a couple of stretches, including the concluding five or so minutes, that were simply gorgeous, Neumann working complex, droning patterns, Ulher buzzing through metal plates and objects rubbed on her trumpet. Perfect length, beautifully realized.

On the second day, the morning venue having shifted to an amazing room in Västerås Castle, we were graced with a solo set from Sophie Agnel, who I hadn't heard in quite a while, at least on her own. She used substantial preparations and used them exceedingly well, generating a kind of rough minimalism that reminded me of things like Rzewski's "Winnsboro Cotton Mill Blues", except that this ws better. Not afraid of emotive qualities, she rumbled through, the prep sometimes engulfing the keyboard sounds. Very strong, very moving.

Later that evening, back at the main venue (two theaters in an arts complex), we had Martin Küchen and Seijiro Murayama. I had been very happy to finally meet martin, having written a couple of things for him over the last few years and had spent a good bit of time in conversation with him prior to the set. He was feeling pretty ill and perhaps this contributed to an extremely restrained quality to the performance (Seijiro would later mention that he was being extra-delicate so as not to cause Martin to spontaneously regurgitate something other than air). The entire set was hushed, often barely there. When Küchen lifted his baritone, I "feared" things would edge toward the raucous, but no. Hard to describe but very, very moving.

Oh, the discussion, my reason for having been brought there, went well enough, I guess. I'll leave that for others to comment on, but I certainly enjoyed it.And, as much as the music, it was just a great, great pleasure to meet and re-meet so many fantastic people, to have the opportunity for extended conversations, eating and drinking with them. I'd like to deeply thank Johan Redin for inviting me and Tomas Nygren for agreeing to get me there. So great to get to know or re-know Lina Gatte Redin, Lisa Ullén, Katt Hernandez, Sven Rånlund, Magnus Nygren, Birgit Ulher, George Kentros, Andrea Neumann, Martin Küchen, Milenko Micanovic, Piotr Ryziński and others. But above and beyond, my co-panelist Nina Polaschegg. Nina was a fantastic cohort and companion all weekend, tough and incisive, absurdly smart and an absolute joy to come to know. Thanks, Nina!Visited Stockholm yesterday, lunched with that old softie Mattin and his ridiculously beautiful and lovely daughter Odita.

off this afternoon for three days in the balmy clime of England where I expect to encounter, after too long, Master Pinnell, a perhaps take in some small percentage of the Tate Modern.
Posted by Brian Olewnick at 4/23/2012 02:51:00 AM