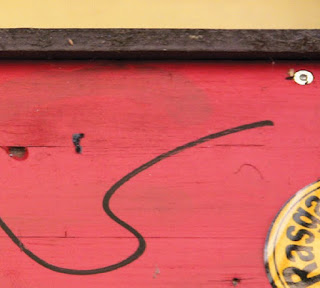 Andrea Neumann/Bonnie Jones - green just as I could see (Erstwhile)

Another of those releases which I enjoy very, very much but find a bit difficult to write about. Coming in, I had certain expectations about this pairing, thinking that Neumann was likely to come at things from a somewhat more gentle angle, Jones from a harsher one. Even so, though I've heard both musicians a number of times, live and on disc, I wasn't at all sure how comprehensive my knowledge of their approaches was and tried to suspend any preformed ideas. As it happens, while I suspect that each moved a bit toward the other, it's difficult enough (for me) to tell, more often than not, who's responsible for what element, really mooting the question.

So, I'm left with four tracks, each strong, each with an underlying thread of buried lyricism that recalls previous Erstwhile recordings like "eh" and "lidingo" (the latter with Neumann), releases that on a surface level are not so hard to digest but which, intriguingly, keep on revealing levels and connections on subsequent listens, betraying a wonderful gnarliness that's not apparent on first blush. It's an odd effect, as one can flip-flop between the two modes of listening, allowing the music to wash over you one the one hand, or really concentrate on it and dissect it on the other.

As to describing the music, well...the structures are thick and elastic, rarely very sparse (somewhat so in the third and fourth tracks but even there, the scrim is pretty consistently in place), more often filled with a variety of sound sources, balancing long-held tones with skitterish ones. You can pick out Neumann's inside-piano now and then and make the assumption that a given explosion derives from Jones' broken electronics, but the pieces are so cohesive that you really don't care. The sheer thoughtfulness is everywhere apparent; there's always focus, always a sense of distinct pathways being trod, tense space between them, occasional merges but two independent minds. There's a strong sense of progression, even narrative, at work. There's even a delightful little surprise tucked into the second track, one which I won't spoil here.

There a scarce few moments of even partial disinterest throughout--the disc is simply , at the very least, entirely enjoyable on a minute to minute basis, occasionally rising to wondrous moments, always repaying new visits (I've listened about a dozen times as of now) which inevitably reveal previously unglimpsed paths and connections.