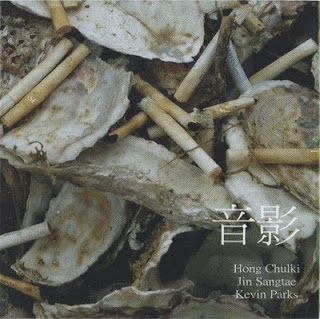 Perhaps the translation as "chiaroscuro" is the most fitting; one of the immediately apparent aspects of this very fine recording, for those who have experienced the music of the Seoul-based musicians only on disc, is the transitioning between the harsh, more abrupt sound-word they've tended to inhabit and a smoother one, one in which long, semi-pure tones are not uncommon. It's a fantastic mix. I'm guessing the latter is largely the result of Parks' presence here; not that his own out put has been so streamlined, but that the longer tones seem more often than not to be introduced and elaborated on by the guitar, picked up by others in the ensuing minutes.

That's the impression which permeates the disc: a delicate, lovely balance between the rough and tumble of Hong Chulki's turntables (which, surprisingly in this day and age, are occasionally the brief source of some identifiable music) and Jin Sangtae's hard drives and Parks' guitar and electronics, the former seeming to adapt themselves a tad or two to the relatively clearer tones and hums of the latter. It's bby no means a complete accession and that's much of the beauty, that tension and elasticity that forms in between. As implied above, it's entirely possible that this particular area is more routinely heard at performances in Seoul than have been documented on disc (at least within my hearing), but to this listener, the music comes as a refreshing variation to what's appeared before on Manual, Balloon and Needle, etc. Parks' oyster shells to Hong's and Jin's cigarette butts? The fifth of five tracks achieves a special kind of synthesis, really beautiful.

It's quite active overall but feels entirely unforced, a very natural flow in effect, the bleats and screeches blending wonderfully with the more mellifluous tones. I don't want to suggest it's all that smooth, btw, just a more finely grained sandpaper than one might expect. Not sure what else to say except that if you enjoyed the Parks/Foster "Acts Have Consequences" release (and, really, who didn't), you love this one. Highly recommended. 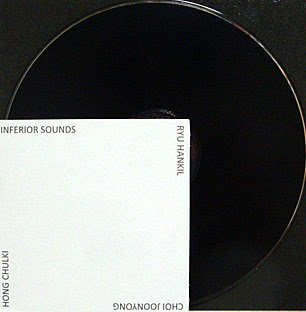 Album title of the year? Though closer in character to previous work out of Seoul, this too strikes me as having moved toward a fuller, somehow more accommodating sound. There's a kind of surge in effect throughout much of the disc's two almost half-hour tracks; one pictures a large mass of all these thorny, harsh elements "balled up" into a larger form that steadily oozes along. As in the Celadon release, the aural landscape is active, silences rare to non-existent. It's more than harsh enough for your average passer-by but less so than I might have expected, given past music.

So in many ways, including the coincidence of their fairly close release dates, I think of these as a kind of diptych. And it's just as hard to parse on some ways. Knowing the instruments involved are typewriters, turntables, CD-players and a snare drum gives one an idea and if you know earlier work from these musicians, you'll have an inkling, but there's less overt aggression than encountered in the past. I'm of course reluctant to conclude anything of a general nature from only two examples but I'm naturally curious to find out if this represents anything of a recent tendency there. Whatever the case, this adjustment, if it is such, suits really well with me, nudging the music just a hair toward a more user-friendly sound. It will still easily drive any adjacent acquaintance from the room, don't misunderstand, but the music feels more solid and focused than ever. Excellent work. (and a wonderful packaging idea)