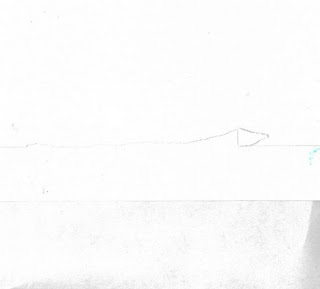 As performed by Barry Chabala (guitar) and Ben Owen (synthesized tones, field recordings)...and gorgeously so. I haven't seen the score and I must say, a part of me would rather not, preferring to wallow in it and contemplate why on earth this gossamer construction seems to hold together so well, what the structure could possibly be that makes it seem as solid as any more densely populated piece of (fine) music. The field recordings are a constant, though at a fairly low volume level--urban, with car sounds and kids playing, but often at a distance as though heard from a high story of a building (other times voices in a large enclosed space). Chabala's guitar and, I suppose, Owen's tones appear at intervals, relatively strong, sometimes surprisingly so, though never (of course!) strident and varying in their attack. Here, it seems to strive to blend into the city sounds, there it stands apart. A place to be two. I read it as a weaving in and out, the street sounds always there, if only hovering faintly, the guitar passing now and then. Yet there's a tensile feel to it as though there's a grid underpinning everything, but difficult to perceive. 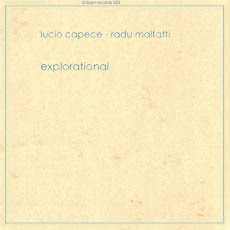 I think my natural tendency, perhaps not uncommon, when approaching a new release involving Malfatti, is to think compositionally, in Wandelweiser terms. Obviously a wrong tack in an improv session like this one. But listening to it as such is tough in one sense, though immensely rewarding--it does indeed challenge one's notions of free improvisation. There have been many comments, of course, about it's severely quiet nature and yes, it's a recording that begs to be heard in a pristine environment. The heating unit for our apartment is outside my room and, it being winter, when it activates, there's no way I hear the music. My window fronts on the street which, though reasonably quiet, is populated by vehicles whose engine hum is uncannily close to the pitch of the bass clarinet and trombone being ever so subtly wielded here. So one does the best one can and...it's enough.

It's an extraordinary performance in ways I imagine I'll still be delving into years from now, two sets of faint, hazy (though precisely limned) lines in space that occasionally intersect, balanced beautifully. More than most, one would wish to have been there and, happily, there's a video available of the first 23 (out of 40) minutes of the set:

Going on about the control, sound placement, quietude, etc. seems silly. It's an improv, that's what I love about it. I love that Radu waits about 6 1/2 minutes before making his first sound. I love the sound of the paired horns when they coincide but also love that this happens only rarely.