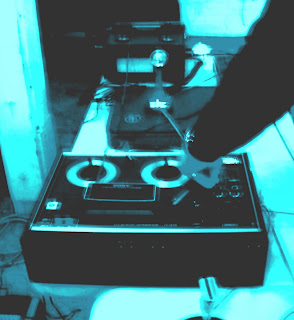 So, I have a good deal of ambivalence about last evening's concert at Issue Project Room, with Graham Lambkin and Jason Lescalleet. It was a fairly lengthy set, divided into two sections (separated, humorously, by a vinyl recording of a darkly Romantic piano/violin duet; I've no idea of the source--Schumann?) designed as a kind of "record release" performance for "Air Supply" on Erstwhile. Jason, before it began, said it would contain referents to the album but not, of course, any wholesale pieces from same.

Lambkin had a Kurzweil keyboard, a small, "toy" turntable and other devices while Lescalleet maneuvered between four tape decks, a computer, several mini-cassette recorders and a mixing board. They began with jungle field recordings, replete with squawking avian fauna and rushing streams, an oddly "routinely exotic" kind of choice, though this was followed by, I'm guessing, altered recordings of Asian (perhaps Korean?) solo drums with lovely, irregular cadences, rather like a stone tumbling down some resonant stairwell. So far, so good. They then settled into a deep--often very deep, enough to dislocate blood clots and send them scurrying brain-ward--electronic drone. While fine for a while, it didn't, for me, carry much in the way of inherent interest and, as it turned out, it was returned to again and again for much of the evening.

When it served as an underlying element and had added grain and noise, the result was absorbing; indeed, my favorite musical moments in the set were just those portions, when a seriously complex and rich throbbing, dirty, gnarly drone filled the space. I say "musical' as the other highlight was simply watching Lambkin during the performance. Perhaps not the most comfortable stage presence, he would set something in motion then amble about, beer in hand, off to the side areas out of view or sit himself on a chair, face the right-side wall and stare at it for five or so minutes. He also, apparently without foreknowledge on Lescalleet's part, came over to Jason's set-up several times and manipulated the very device (mixing board , tape deck, mini-cassette) that Jason was working on at that moment. It was rather charming to see them huddled together, twirling knobs, lifting tape, side by side, like two young boys experimenting in the basement.

That damned drone seemed to be acting as an irresistible attractor though, continually drawing them back from some other interesting, if only briefly explored area, something I found frustrating. Despite having been "warned" about the evening's set bearing some relationship to "Air Supply", I was admittedly unprepared for the (I suppose inevitable) blast of fucking enormous and sudden noise that Lescalleet let loose toward the end. Like being smacked in the face with a 2 x 4. Jason was smiling wickedly...

Ultimately, I found the entire event unsatisfying though there were certainly enough glimmers to make me want to hear them again (this was the third time I've seen this duo). I'm sure I was in the minority, though; IPR was full, maybe 120 or so in attendance. They're playing Philly and Wesleyan next month, I believe. We'll see.
Posted by Brian Olewnick at 1/16/2011 09:56:00 AM

not alone brian, i had pretty much the same experience. especially the "interesting, if only briefly explored areas" part. there were several times i felt they moved on way too early from a wonderfully developing section, never to return.

it was a good show, but I think there was an adventuresome spirit that possessed the first time they played that was missing here. from my vantage point I could not see any of Jason & Graham's interactions - I pretty much had to sit there see how deep I could get in the sound coming out. While I think the material was at times staid, Jason still wields his sound with more richness and life than a lot of folks out there doing "ambient drone" these days. He's only so interested in soothing us.

what was most disappointing to me, however, was the poor performance of IPR's recently upgraded sound system. Jason has played there twice (at least) in the last two years, and he never lacks for volume, yet this time, I could easily hear both the mixer/amp side and speakers choking hard.

yes I could have done with a bit less soothing a bit more crackling skronky variations and additions to the drones. I do that part of that is intentional to have the listener deal with the tension and eventual release.

I still thoroughly enjoyed the show