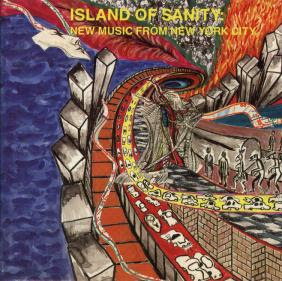 Not surprisingly, I guess, aside from Abdullah Ibrahim, the "I" portion of my LP collection is mighty scanty. In fact, there are only two other residents. One is a recent addition, Giuseppe Ielasi's "(another) stunt" which I reviewed early last year. Just replayed it and, I should say, enjoyed more than I did at first blush. Nice recording, check it out.

The other, filed here for no better reason than the beginning letter of its title, is "Island of Sanity", a double-LP compilation put together by Elliott Sharp in 1987, featuring downtown NYCers in various groupings. Thought I should give a spin if only because three Record Club guests appear here in (Chris Cochrane, Rick Brown and Zeena Parkins. Record Club tonight, btw and Zeena's coming!) You also get oddities like Voice foodie Robert Sietsema playing bass with Mofungo (the Beefheartian, "Slimeball Necktie") and Martin Bisi's classic (?) version of "Kaw-Liga". Odd time and place, 1987, Loisaida.

Good Skeleton Crew track (Frith, Cora, Parkins), "Sparrow Song"--brief and harsh: "Got a brain/Got a brain/Like a peanut on plate". Huh, forgot that Mark Dery is here too--a not bad, Giorno-esque track called, "Banging Khruschev's Shoe". Perhaps the highlight of the set is the Ordinaire's take on "She's a Rainbow" (always liked the Stones' brief psychedelic phase--someone needs to cover "2,000 Light Years from Home"....), full on, rich and fun. Bosho's "Boy Yaca" is easily the best thing I ever heard from them though, in retrospect, it reads as rather timid for all the cross-rhythms.

Lot of so-so to awful stuff as well, the latter including Previte's vocal work that closes out the collection.

Intriguing snapshot of a time and place though, were this representative of everything going on in NYC at the time, one wouldn't hold out great hopes for future music from this neck of the woods. Hmmm....

Addendum: no new CDs in sight, I continued on into the J's, first encountering Ronald Shannon Jackson. I have seven LPs, beginning with Eye on You (About Time) which I played through and found seriously lacking, very thin sounding. Went on to "Mandance" which, when it appeared around '83 I was very high on, and had trouble getting through Side A. Think I'll skip the rest... ("Barbecue Dog", "Pulse", "Decode Yourself" and "Live at the Caravan of Dreams")
Posted by Brian Olewnick at 1/08/2011 08:41:00 AM

Love RSJ with Cecil, never found his solo stuff very compelling. A shame, I think he's a great drummer. And what's he doing these days?

Jackson lives in Fort Worth now, in, I think, the house he grew up in. He doesn't play out much but apparently he still has a Decoding Society that performs, mostly in Europe.

Wow! I'd love to meet him (I'm in Dallas). I'll have to see if he ever plays any clubs around here.