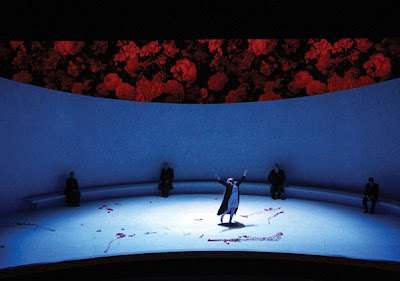 I went to the opera last night.

I can't say I went entirely willingly. I've been before, twice to the Met (Turandot and Tosca, both over ten years ago), once to SUNY Purchase for a Peter Sellars production of Don Giovanni, once to the delightful Amato Opera Theatre on the Bowery--I forget which opera. I think that might be it as far as "traditional" opera (not counting Glass' "Einstein", Ashley, etc.). I'm not the hugest fan of the form, though I've enjoyed the Wagner I've seen on TV, wouldn't mind seeing "Salome" as well.

Anyway, the distaff side expressed a desire to go so, $500 poorer, we went.

The current production is under the direction of Willy Decker with set design by Wolfgang Gussmann and I think that made all the difference for me. Those who attended "Einstein" (at least the '84 production at BAM that I saw) will remember that the performance is already in progress when the theater doors open, the two readers present at either side of the stage reciting numbers, text, etc. I was reminded of that when entering the Met last night as the stage is already in full view and, sitting stage right, there was the motionless figure, clad in black trench-coat, of Dr. Grenvil. In a standard production, if I'm not mistaken, that character doesn't enter the action until about 3/4 of the way through. Here, he's an almost constant presence, observing the goings-on very somberly, a pervading reminder that Violetta isn't going to escape her fate.

As well, the stage set is what one might term "abstract timeless", a concave parabola with minimal props, the palette going from white to gray to black with mostly bright red highlights (like Violetta's party dress), everything on the spare side which served quite well to accentuate the drama. A mass of Victorian clutter and taffeta would have swiftly had me yawning.

The soprano, Marina Poplavskaya was outstanding to even my untutored ears, both in subtly of voice (in the pianissimo sections) and projection, as well as doing a wonderful job of inhabiting the character, saucy and distraught as necessary with much in between. She far outshone her Alfredo, Matthew Polenzani, whose voice was no match. Baritone Andrzej Dobber was also very fine as Germont.

These factors made for a far more engaging evening than I thought I might have, going in. The music itself I knew well enough from having heard it around the house for 32 or so years; it's seeped in through osmosis, slithering past my aural defense. There are passages I like, passages that strike me as fluff, but in the context of this staging, nothing seemed particularly offensive and several moments were quite moving. In any case, nice to find out that I can, possibly, enjoy the form.

At those insane ticket prices though, it won't be a routine occurrence. But one of theses years, I wouldn't mind returning for some Wagner or, perhaps, "Salomé"....
Posted by Brian Olewnick at 1/23/2011 10:48:00 AM

That first sentence could be a Feldman title.