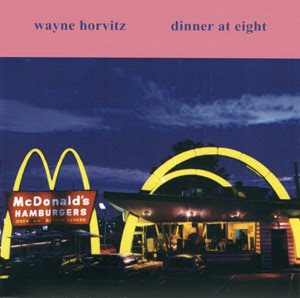 Been a while since I accessed some old vinyl and, in truth, wasn't sure whether it would be worth giving the four LPs I have filed under Wayne Horvitz a shot. His music, at least in the mid-80s, which is what I have, has such a sheen to it, a kind of sweet gloppiness, that can be both offputting and, admittedly, ickily enticing, like a candy apple.

His melodies tend to be just this side of potential use as TV show themes but, I have to give him credit, they're catchy. If one can, with some difficulty, carve out the drum machine sounds, much of "Dinner at Eight" is reasonably attractive, lent just enough edge by the presence of Elliott Sharp (still interesting then). And Doug Wieselman (clarinet and tenor) fits this sort of thing perfectly. Horvitz mixes these more straightforward, rock-based pieces with ones where fairly free noise-improv overlies a smooth base. The former are better, honeyed though they are. It goes down smoothly but provides minimal nutrition. 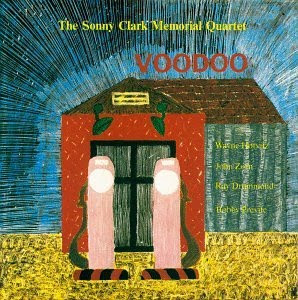 I guess this was Zorn's first recording (November, 1985) covering bop standards? Prefiguring the News for Lulu trio and other like stuff. The interesting thing, i guess, is how straight ahead they play it, with only the odd, slight nod to free improv. Given that, it's perfectly fine and the Clark pieces are small gems in and of themselves, but it's not hard to imagine any number of folk getting more out of the music. Zorn in particular, while entirely competent, kind of uses up his range of approaches quickly and becomes a bit tiresome. Still, not bad. 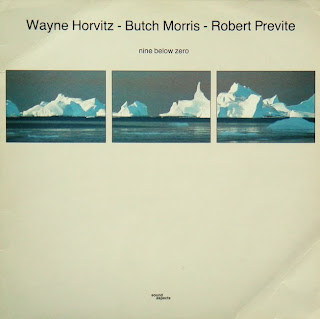 Probably the most interesting of this bunch, the least contrived anyway, from January, 1986. Morris certainly makes a big difference, imparting depth and grit, leavening the drum "maschines". Generally more abstract which works especially well when moments of lovely melody, like at the ends of "Glory" (written by Robin Holcomb) and "If Only", intervene. 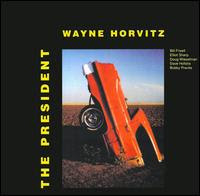 Kind of an updating of "Dinner at Eight" (1987), with Frisell on board and a more rockish cast to the music but also a nod to C&W. I recall being paticularly enthralled, at the time, by the hardest rocking piece here, "Short of Breath" which does indeed retain some of its propulsiveness though, like the earlier album, it wouldn't sound entirely out of place as the intro theme to a jaunty network cop show today.... 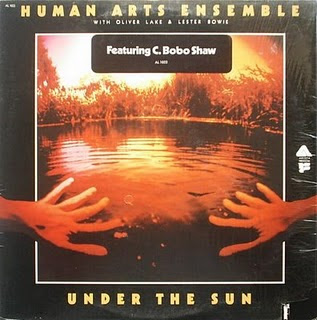 Hey, only one more LP to close out the H's and it's better than all the Horvitz'...

July '73, just before a bunch of the BAG guys would make it to NYC--Bowie, Lake, Shaw, Ehrlich, JD Parran. Two side-long pieces, "A Lover's Desire" (transcribed from and Afghan folk melody--should try to find that...(ah, still around here--one of these days, I need to hear as many Smithsonian Folkways recordings as I can...) Side B, "Hazrat, the Sufi", is a wonderful springboard for the solos, the bass line (Butch Smith) opened up to endless variations, JD Parran excellent on harmonica. Odd that there's a sticker on the Arista releases announcing "C. Bobo Shaw"'s presence. Baffling as he was never remotely a big name, but so it goes. Maybe he was set to record on some big pop record that fell through...

It's funny how one can form perceptions about an artist yet not know his or her work. I've always avoided Horvitz for pretty much the reasons you stated, but i've hardly heard anything by him. You already covered Dave Holland, right?

Yep, September 6th post. (can't seem to do a direct link, but here's the month:

the way you have it set up, you need to go into the comments, then click on the title (often the word 'untitled'), and that'll give you the direct link you want:

Robin Holcomb and Talking Pictures' (with Wayne Horvitz)"The Point of It All" from 2010 an interesting addition to the Holcomb/Horvitz body of work.

I haven't heard anything of Holcomb's in quite a while. I really enjoyed her first disc on Nonesuch and "Little Three". But when she reined things in and veered more toward standard folk and pop forms, I wasn't so taken. Thanks for the heads up, though.