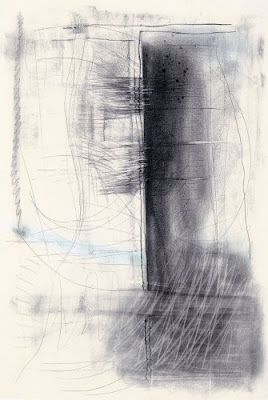 The interested viewer who knows anything at all about Gerhard Richter, that is, who has read his writings or interviews with him, is faced with something of a quandary upon entering an exhibition of his, especially one devoted to his drawings. There's currently one such at The Drawing Center in Soho, comprising about 50 works, mostly in graphite but also several watercolors and pen drawings.

Richter disdains drawing and all the adjectives piled on it since time immemorial: graceful, textured, felicitous, delightful and such. He resents and questions its relationship to art. He inserts a pencil into a drill bit in 1966 so as to eliminate human control over the marks that result. He scribbles and he copies photographs exactly, in the same month, attempting to negate the difference between them, to obviate any notion of beauty.

One looks at these drawings and the overwhelming thing, the words that reverberate in one's skull are: This guy can fucking draw! No matter what he does, this extraordinary visual sense wins out, breaking past any barriers he attempts to place in its way. These drawings simply look stunningly beautiful.

There are 15-20 small graphite drawings done around 1999, about 8 x 10 inches, that one can't help but view as abstract landscapes or cityscapes (goodness knows Richter's done many a landscape in his realist persona) and to a one, they're amazing, could be looked at for hours. The variation in tone, the distribution of ultra-dark dots, often evoking musical scores, smudged grays, spidery lines and frequent use of erasures is just dazzling and extremely sensuous. They're all (I believe) horizontal, and often possess something of a horizon line, so that one sees essences of clouds, streetlights, grime, buildings, headlight halos etc., but in a kind of dream state, fractured, deflated or inflated, vaporized.

The four large drawings done in 2005, one of which is reproduced above, have a quasi-similar vertical structure, a very architectural feel, but also a vast amount of freedom, a strong sense that Richter felt free to introduce any element, any technique, that the underpinning was rigorous enough to support most anything. (More than once, contrary to, *ahem*, certain IHM posters, I felt a decided kinship to aspects of eai) 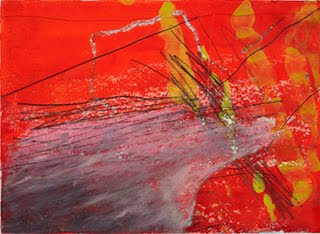 The watercolors are also fascinating, apparently created via the flow of thickly imbued water over smooth paper. He manages to keep things from muddying (no mean trick, that), resulting in a dense overlay of colors, almost foliage-like in effect.

But one keeps coming back to the drawings, reveling in the immense wealth of detail and the relationships between forms. There's an enormous amount going on in each; one stands there for 15 minutes looking at a single example and just sees more and more. So rich.

Perhaps the weight of art history simply overwhelms Richter, casting aside his objections, forcing his wonderful eye to the fore. No complaints from this observer.
Posted by Brian Olewnick at 9/26/2010 07:02:00 PM

Thanks for this, Brian.

I'm unfamiliar with Richter on any worthwhile level, but have been anything but a fan of the bits and pieces I have come across down the years. That first drawing you have posted here is great though Brian, and your info on his processes is very interesting, so I will keep my eyes open for more like this.

Have to admit, I am no big fan. But really, you put it so well: “One looks at these drawings and the overwhelming thing, the words that reverberate in one’s skull are: This guy can fucking draw! No matter what he does, this extraordinary visual sense wins out, breaking past any barriers he attempts to place in its way. These drawings simply look stunningly beautiful.” And I cannot forgive him that, he miserably fails at translating his attitude into something halfway gritty that might sort of stick on the retina. I caught one of them retrospective shows almost a decade ago, and my lukewarm reception of the guy became massive disgust, I was absolutely offended by a complete roomful of the large abstracts on show, the artist pushing treacle across canvas with mindless abandon. And that’s only the problem with the drawings magnified. But then I have continental tastes, Richter does seem like an honorary American :-) And it’s good to have small pet aesthetic problems to fondle and grow sense out of . . .

Maybe that's it, he's too American!

I agree he's really tough, that is really tough to appreciate on the level he insists on and not get sidetracked by other aspects. When I saw the MOMA show in 2002 or '03, I was trying to grasp as much of it as a whole as I could--the bland gray portraits, the garish abstracts, the faux-Vermeers--an impossibility but you could get a sense of it, perhaps.

But I will say that I think his Baader-Meinhof series is one of the single finest achievements in visual art over the last 50 years.

Waking up I remembered the pane of glass he had hung, in exactly the same format as the paintings around it. As a gesture, that was really cheap for me: yeah, I reflect in it, so the viewer is in the picture. Yeah, I project the stuff from out of my own poor severed head on flat canvases, so the joke's on me, granted. Don't you artists have to find a way out of all of this? But still, this simple pane of glass in context looked drop dead gorgeous.
The RAF cycle, well, I'm German, I'm aware of the originals. Do they need bad reproduction by hand? Especially if you've grown up with posters of foggy mugshots of them guys, partly disguised by fake Fantomas attire, hung at every train station? No sorry, Richter doesn't really get to the level where his paintings begin to influence the everyday awareness. And even more sorry, it's not a Gentileschi :-)

Damn! I recognize the image but had always associated it with Gentileschi! Now I can't find it....assumed it was John the Baptist, but maybe Goliath? Frustrating....

I don't think I've seen a glass piece of *that* sort from Richter, though I've seen the large, indigo panels installed at DIA. Those, one takes in as sculpture, imho, actually in a relatively constricted space, as I recall (not as much as the mammoth Serra nearby, squeezed into a room barely able to contain it).

Yes, I suppose one's context plays a big part in the RAF paintings. For me, they possess a certain amount of (to use an overused word) zeitgeist of the period, accentuated by the combination of images that are distanced and cold in one respect but evocative and wistful in another. The romanticization of the movement and the harsh reality.

Plus, as ever, they simply *look* incredible. Sorry!!

You're welcome. Allori.And you still owe me one at the other site.

Ah, forgot about that scene from Cache...