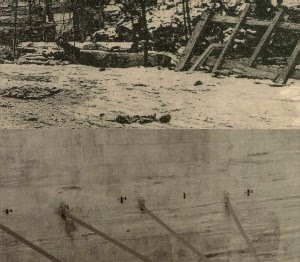 There's a discussion going on at IHM currently on the state of improvisation which I inevitably thought of while listening to this release. Much of the focus is on "newness", also inevitable, and whether or not eai has reached a kind of dead end, if it's merely in temporary doldrums or if, indeed, there's any problem at all. I enjoy newness as much as the next geek and I'd allow that my real favorite music of the last 10-15 years has included that as a component (the oft-mentioned "motubachii" from this year is an excellent example) but it's also by no means a sine qua non for me. Richness, fluency of conversation, humor, solidity of conception, sonic depth, positioning of sounds in a complex environment--all these things and more can turn the trick for me, and this disc has them in abundance.

Erik Carlson, Martin Küchen, David Lacey and Paul Vogel don't redefine the territory of contemporary improvisation but they inhabit it thoughtfully and vibrantly. One salient characteristic here, as opposed to much in the field, is that the sounds are pretty much non-stop and always multi-plied; guessing, I'd say that at least three musicians are present at all times and playing at moderate volume. No stretches of silence or ppp. There's also the use, sporadic but often, of rhythmic kernels, sometimes thick taps, later on of a bell-like nature, that serve as knobby vertebrae on which to drape all the squeaks, rattles and scrapes. Within this, though, there's an overall semi-consistent texture. The specifics vary quite a bit and never sound forced; you get the impression that the quartet has a vast well of approaches yet feels no urgency to flit from one to another but will calmly (but intensely) dwell in one area for a while, knowing they have years to go to investigate others.

The struck metal, low pulses and high, keening sounds that occupy the second track, "the Great War", impart a somewhat ritualistic feel. If one were to quibble, I suppose the ringing metal might be thought of as too appeasing, too overtly beautiful, a convenient earhold allowing sanctuary from the other, rawer sounds. While I could understand that criticism, it bothers me not at all here, no more than the aforementioned parcels of rhythm. In portions of the final cut, "An Uncast Wind", those rhythms are more upfront, but they ebb and flow naturally enough to feel like welcome breezes, entirely natural. Special mention might be made of Küchen's contributions here: his saxophone, both breathed into and otherwise manipulated, blends in perfectly, supplying a ton of color.

Groundbreaking? Not so much, but I don't care. It's an absolutely solid release, every moment evincing intelligence and imagination. I could easily have listened to another 50 minutes, and more, of the same. Wonderful music, check it out.

these just got here yesterday and I haven't checked it out yet, but it should be noted that it's housed in a beautiful digipak, really nice texture to the paper.

Brian, the similarity in our reviews is striking again. For me, the ringing bell sounds reminds me of Tilbury riding over the trio AMM, little drops of colour amongst the electronics and bowed metal.

As for hearing more of the music, there is an extra unreleased, unmastered track at http://i-and-e.org