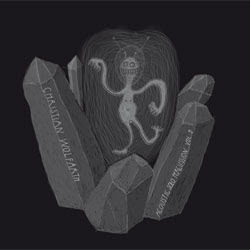 The third in a series of four 7" vinyls (white, this time); two tracks, each almost seven minutes long. "Crystal Alien" involves a pair of cymbals bowed simultaneously, essentially generating both a high and low drone, though each has its own richness and throbs at a different rate, resulting in a very engrossing weave. It's "one thing", just sits there and pulses, but does so enchantingly. The second, "Amber", retains the bowed cymbals, adding styropor (the same, more or less, as Styrofoam, I think) rubbed on a snare, providing another layer though I found I slightly preferred the former, liking the kind of purity achieved.

Good recording, in any case. If you've been following Wolfarth's journey thus far, you'll want this one. 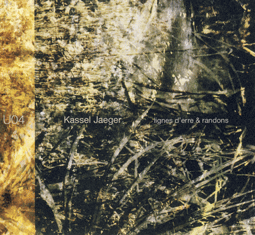 A more jaded listener than I might be getting a wee bit tired of processed field recordings as such, but I have to say my ears are still open. I try to think of them just as one daily absorbs visual information--that walk to the subway is the same each day, but wildly different and fascinating as well. Which isn't to say that all recordings like this tweak my pleasure center--they don't--but I've yet to be put off by the prospect of listening to yet another.

Jaeger recorded at various locations in Europe: Berlin, Köln, Paris, the French countryside. Near rivers, amongst pipes, betwixt insects. Takes these captures home and assembles mutant creatures. The sounds themselves are rich and lovely, often eerie in the sense of being just on the other side of recognizability. One can easily lie back and bask in them, allowing them to flow and gently, sometimes urgently, tickle one's dermis. Listened to more closely, in search of some kind of interesting structure or ideas apart from the sound, I don't get as much. Which concern may be entirely beside the point for Jaeger, all well and good except that it will make this particular release difficult to distinguish, in years to come, from others in its general field. Not an awful thing--and the disc certainly has its enjoyable qualities--but not so noteworthy either.