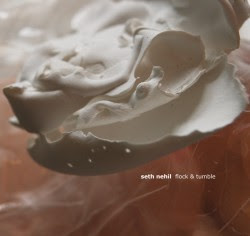 Not too often you come across something that just sounds like little else. I suppose, stretching things, I could make a tenuous connection between Nehil and sometime collaborator Olivia Block insofar as a predilection toward certain hollow, echoey sounds and the general kind of construction in effect, but really, this stands apart. And it's very good. The first rack, "Tew" (so named, I take it, for the vocalized sounds that approximate the title), contains elements that might be kindling wood (or it might be watery in nature, sometimes hard to tell), various percussive tones both tonal and not, scattered irregularly but consistently, and the aforementioned, soft vocalizations, all but hidden. But there is a sense of composition here, of a carefully placed and layered sequence of three sound-zones that don't so much intermix as entwine. The "whuips" of "Whuip" are indeed whuiped like a, um, flock of cranes, arising here and there from another kind of percussion bed, pinned by deep, sizzling thuds and a ringing drone. Here, as in the first piece, the essential pace is very slow (even as some events flit by quickly), a twilight kind of atmosphere with distant rumbles, fireworks, parties. There's some wonderful clatter in other places, sounding like pool cues and wooden balls dropped in a large, resonant space, odd voices often present as though commenting on the delirious activity surrounding them (each piece contains its own nest of ideas, another impressive aspect of the disc). Highlights abound, including the marvelous and unexpected explosion of (all but indecipherable) lyricsal content in "The Sun" and the fantastic, Xenakis-like eruption of percussion in the concluding "Blackhole". If I had to pick, I'd say there are one or two moments when the dronage holds sway a bit long, but overall this is a fine and unique offering, do check it out. 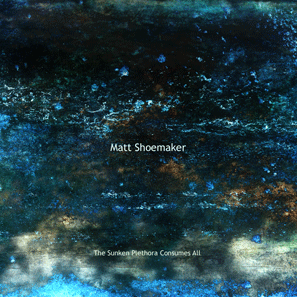 Yes, unfortunate title. And not so exciting music. Shoemaker, like many others in recent times (too many) melds field recordings with ambient, drone-oriented music. In a way, it's a sure-fire combo, like hamburger and ketchup, but too often it's little more than that. Nothing offensive here--isolationist hums, several ply thick, bits of water, birdsong, etc. bleeding through the pores; attractive enough but I don't pick up a strong sense of purpose. There's an over-reliance on eeriness ("Hallucination Pool") that veers dangerously close to the corny in the way that Eno's "Apollo" series did. The title cut, though it begins portentously enough with some mournful tolls, by dispensing the melodic bedding to a great extent, works the best, edging into a bleak area that's convincing.

hi brian,
just read your review of 'sunken plethora'. i appreciate you giving the music some of your time & consideration. i'm sorry much of the album didn't work for you.

one thing i want to mention is that aside from the 1st track (which is composed entirely out of field recordings with very minimal processing) the rest of the disc is totally devoid of any field recordings. it's an important distinction i think for a better understanding of the albums larger structure & form. in fact (fwiw) of the handful of releases i have kickin around out there in the world, going back to 'groundless' from 2000, this one has the least amount of 'melding' of field recordings with drone-oriented textures.