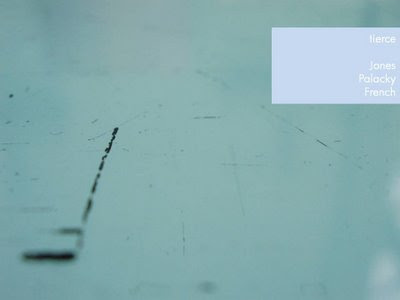 I'm increasingly at a loss for things to say about work like this, especially when I enjoy it, which I very much do in this case. Descriptions are inevitably feeble but simply observing that it somehow conjures up a situation, a place, a real or imagined environment and does so convincingly doesn't do justice either. I will say the trio (Jones, guitar, turntable, contact mic, objects, mixer; Palacky, Dopleta 180 amplified knitting machine (!); French, field recordings, guzheng, zither, objects) strike a delicate balance, managing to capture something of a field recording feel in their improvisations (certain taps, for instance, evoking the naturally irregular rhythms of water drops), that the performance tumbles along like a quiet stream over a complex bed. It's really, really good (a 3", by the way) and you should hear it. 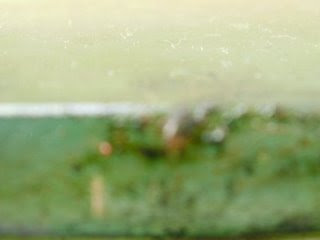 Interesting (if unfair) to compare to the above release; one of the same participants but solo, in a more purely field recording-oriented release (though French bows or otherwise touches various surfaces on three of the six tracks). Here, one's reaction I find often depends "simply" on how intriguing one finds the given sound-field in play. Even there, you're almost compelled to give a deeper listen if, initially, you're not so fascinated; often there's more at hand than you thought. The one unenhanced cut that I immediately loved was the fourth, "as030", which features a motor of some kind (I think), perhaps on a boat (sounds a little watery); it's strong, subtle and varies hugely within a narrow focus. The lengthy final track, the one on which bowing can most clearly be discerned, works pretty well also, a rich range of rubbing-induced groans. It might stagnate somewhat on disc due to its run-time, almost a half hour, but one can easily imagine wallowing it it with pleasure in an actual installation. It's a good disc, but the fine interaction heard in the trio recording puts that one well ahead for me.

Completely agreed about the trio disc Brian, a lovely one indeed. I have refrained from comment on it and the other new one from Jez because I have started work on a long overdue review of Mr French's last five or six discs.

Have you seen/heard the Palacky / Neumann release yet?

No, I saw your write-up and was greatly intrigued. Will try to track it down.

thanks for the review Brian ! the AS (urfaces) disc I should point out is actually for an exhibition resulting from a residency at the location of the recordings: the School of Art & Design building here in Hull.

I strongly recommend the Palacky / Neumann disc - there are only 60 copies of it & it's a belter !