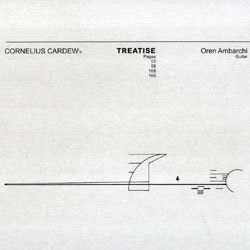 I've decided to spend much of the last two days listening to the Oren Ambarchi/Keith Rowe recording of four pages from Treatise, performed on February 8, 2009 and released as an LP on the Italian Planam imprint (available from Squidco while supplies last--limited edition of 300 copies)

The pages chosen were 53, 58, 168 & 169, the former pair containing some amount of calligraphic detail, the latter two consisting almost entirely of a the single "spine", though p. 168 has a small gap about a quarter of the way across the page.

One reason for doing so was (is, as I'm writing this early on in the day) to try and tease out some of the differences in Keith's approach, not just when performing Treatise, but generally, with that of other contemporary improvisers. I've recently gotten more than ample tastes of that on the upcoming duo with Sachiko M (next week, Jon? [here now!]) but that's so...extreme, I thought this would be something more comparable to work being done in the fields by others. Comparable, but there's always something, many things, that set Keith's playing apart.

Listening to a duo, I necessarily make some assumptions as to who's playing what, some of which may well be wrong. But I feel reasonably safe in saying that Oren's responsible for much of the underlying, beautifully modulated hum and probably some accompanying washes while Keith contributes the spikier portions.

They begin together, Ambachi generating a hum, Rowe a sustained tone, beginning with an audible pluck. As the first four or so inches of the score consists of the spine and a thinner, slightly elevating line, it seems easy enough to follow along at this point. Keith has said that he thinks each page should take about 6-7 minutes to perform (which would make a complete rendition of the 193 pages clock in around a tidy 24 hours) and the entire record is indeed only about 25 minutes long--this doesn't mean, of course, that the tempo has to be consistent and, indeed, there's an abrupt shift about 40 seconds into this performance, a harsh crunch appearing. The first new shape one encounters in the score is a quarter-circle with three lines parallel to the thin, rising line extending backward and three straight segments connecting the ends of the arc forming an irregular "pie slice". Here--quite early!--I lose track of any obvious relationship between sounds and score. The number "4" appears twice, though I don't pick up a correspondence in the musical activity. Ambarchi seems to be maintaining that hollow drone throughout this opening portion, Rowe scrabbling alongside (the short line segments following the first "4" = the scrabblings?)

I know Keith has read circular forms in Treatise as indications to turn on his radio--there are two semicircles on p. 53 and a few full ones on p. 58, though these latter can also be read as variations on the repeat signs that appear throughout the score. I don't pick up any radio at all here, though it's possible he's tuned in to some between-station static. Assuming two pages per LP side (a possibly wuite unwarranted assumption), I also can't detect the page turning. There's a lot of wonderfully bristling static at the midway point on Side 1; if Ambarchi has done much of anything prior besides the drone (which has very subtle fluctuations and is fantastic on its own), I'm not sure; maybe his "role" has been spinal. Around this point, though, I think he expands his palette, maybe sticking with the darker lines of the score, ceding the lighter ones to Rowe. The play between the deeper tones and the rustly, papery ones (Rowe?) is excellent, really establishing a plastic sense of space between them. There's a decrescendo with a minute or two to go, perhaps the converging lines toward a couple of eighth notes near the end of p/58? But the end of the first side consists of scratchy, crackling sounds (over a soft hum) where the remainder of the score has only a straight line and the number "1". Obviously, I'm entirely lost here. I'm rather sure Keith would be able to notate each section with some precision and that, in retrospect, I'd do a few headslaps, muttering, "Of course!", but it's damned difficult to track otherwise. Also, as he's been performing this piece for some 44 years, there's been more than enough time for layer upon layer of intricacy in reading and understanding the score to have developed. Expecting to be able to easily glean what's going on in his head (and, in fairness, I hear this as more a Rowe-directed performance than a 50/50 collaboration; perhaps unfortunate but maybe unavoidable) is a fool's errand.

As mentioned, pp. 168 & 169 are pretty much just the spine, with a single brief gap. Now, I have no idea, really, if the pages were performed in order or if they were laid out in any way sequentially rather than, say, played as overlays. Whatever, the music on Side 2 is hardly linear. Once again, Ambarchi lays down a bed, here more varied and granular than before, and Rowe injects harsh, rubbed sounds, quite rough, in the manner of many of his recent recordings and performances. One thought--the line in question is hand-drawn, after all and, examined closely enough, is full of small irregularities. Perhaps they're taking a microscopic journey along its truly bumpy path. There's a clear guitar twang a few minutes in--hard not to read that as the empty gap! A furious spray of chittering electronics ensues before things settle in, though not completely--it's calmer but there are five or six things occurring at most times. That's one active line. Dunno, maybe the last two pages take place in the final minute.

But back to my original point. Granted Oren's contributions, Keith's interjections are just so right, so to the point (independent of my not being able to connect them with the score) in terms of timing, texture, dynamics and boldness. That latter, balanced with an innate sense of restraint and reticence, is what really makes it for me. The restraint insofar as not having to do anything, the boldness in feeling no compunction or constraint to hold back when an idea hits, the confidence in knowing one can place it within the ongoing context without its calling undue attention to itself at the expense of what's occurring in the room. If there's one quality in Keith's music that's rare to hear in others, it's that, for me.

Eh, always tough to express. It's a very fine release, in any case, both considered (as we've come to expect from Keith) and exciting. Can't wait for the Cathnor Treatise recording to arrive, complete with annotation....
Posted by Brian Olewnick at 7/14/2009 09:07:00 AM

I'd love to hear this, I suspect its great, but probably won't because I don't own a turntable.

Just an observation, but when CDs are the most common and cheapest form of playback for most people out there, I wonder what Cardew would have made of his music being released in a format not easily accessible to all?

Good question. Still, you, Mr. Pinnell, have no excuse.

pretty sure the "most common and cheapest form of playback for most people out there" is illegal DLs, and I'm sure it'll be there soon enough if it isn't already, which Cardew probably would have been quite happy with.

I haven't heard this yet, but I do have a copy and a turntable.

Perhaps yes, there are more illegal downloads in the world these days than CDs, and I am sure Cardew would certainly have approved of them.

This isn't a free download release though. Its a "limited edition" vinyl release. If I personally wanted to be sure of hearing the music as the musicians intended I would have to spend around £20 on the disc even if I had a turntable to play it on.

I should add that I am only wondering about the release format in view of Cardew's thoughts on these issues, not my own.

again, I'm pretty sure Cardew would vote for free DLs, legal or illegal, since there are major regions of the world essentially unable to buy CDs at almost any price.

so, if this is a real concern for you, maybe that's what you should do with your release of Keith's Treatise as opposed to putting it out on CD, music and notes available for free DL.

Yes maybe that's not a bad idea at all.

Might run into problems with Peters Edition, who can be pretty fierce with copyright infringements.