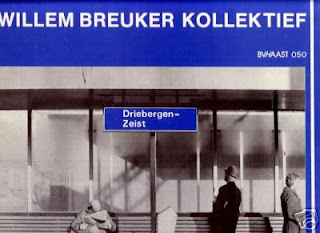 Something I've found when attempting to play through records by a single individual or group whom I used to greatly enjoy: Nostalgia only takes you so far. It often gets tougher to dredge up any real desire to re-hear some things. It's getting there with Breuker.

"In Holland" still stands up as likely the most complete, most solid album they ever did with "Driebergen-Zeist" (pictured above, somewhat lopped off) coming in a close second. I know the former inside-out and actually acquired it on disc a couple years back; needn't hear it now. Listened to the latter this morning and, yes, it still holds up pretty well on its own. Garrett List is in the band at this point, making him a quasi link from WBK to AMM via MEV. (Has anyone heard List's own recordings from within the past ten years? Always meant to get to them but never have). The very fine Belgian saxophonist Andre Goudbeek joins the band at this point as well. There's a marvelous reading of Weill's "Pirate Jenny" by Dick Swidde, some 77 years of age at the time of the recording. The title track as well is something of a wonder, essentially nothing but theme after theme for ten minutes including some rather humorous "misreads".

But then I look ahead at the six remaining pieces of vinyl and sigh. I know it's going to be more of the same on a slight downward path. The self-titled About Time release is very good, recorded around the time they played two nights at the Public Theatre in '83 or '84, sharing a bill with Steve Lacy's Sextet. I went to both shows, bringing friends who were otherwise ignorant of this kind of music. WBK was great for that; inevitably folk were entertained. It was on these back to back evenings, though, that I became aware of exactly how choreographed Breuker's sets were. To a dispiriting 'T', including apparently improvised sections, stage patter etc. It sunk in, finally, that I was experiencing more of a theatrical event than a jazz concert and this knowledge left a sour taste that never quite left.

Breuker began devoting more and more space to repertoire recordings, one with Gershwin and Morricone (pre-Zorn, give him credit) which includes his enjoyable "Spanish Wells", something of a Morricone homage, another all Gershwin. iirc, "Bob's Gallery" from 1987 was his first album to get fairly good distribution in the US which, I can only assume, accounts for its high place on various Breuker polls I've seen because it's really not a very good record, complete with an all too late Philip Glass pastiche.

Finally, there's a duo with Bennink from '84, live in Japan issued on Jazz and Now. Can't quite bring myself to put it on.

Still, I wouldn't entirely give up on the band until around 2000 after the unrelieved tediousness of "Psalm 122" following a string of really mediocre albums. "Psalm 122"? A religious-themed work from a guy who used to incorporate socialist worker's anthems in his music? Feh and double feh.

But those first few years were fun indeed, I haveta say.

Haven't been here for a while and I'm sorry your Breuker compilation hasn't drawn more comments. Out here in the sleepy sub-backwater for improv, I didn't become aware of these guys until their About Time release (I'm sure Cadence had been banging about them, but ordering vinyl through the mail was a lot clunkier than cds), went to their post-release tour at Oberlin (and subsequently lucked out on a work trip that was just down the street from Joe Segal's Jazz Showcase in the Blackstone Hotel, where unfortunately they played essentially the same exact set; it was interesting in a different setting but still disappointing). Every characteristic of the band you comment on was appealing; I just wish I would've caught some of the earlier shows you mentioned. I shared some of your late 70s qualms about Euro improv (not that I would've had any opportunity to catch it locally); my loss because those re-releases absolutely smoke.

Hey Steve. That prejudice of mine against Euro-improv, even if some of it was grounded in accurate experience, is very aggravating in retrospect. Among other things, it doubtless kept me from hearing AMM until much later than I might have otherwise. otoh, the AACM and associated musicians scene was so vibrant in the mid-70s that I don't imagine it was uncommon for listeners my age to cast their lots almost entirely with those folk. Just goes to show.