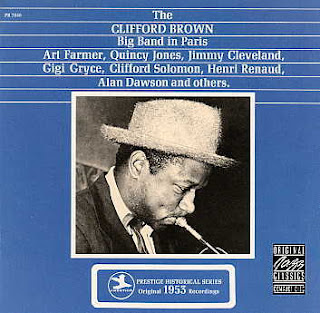 I may have mentioned before, but when I began listening to jazz in 1972, my collecting efforts were largely confined to contemporary or near-contemporary releases. There were a few exceptions, of course. I went back and bought everything I could by musicians like Mingus, Ornette, Cecil. But having the luxury of WKCR at hand, I could pretty much hear "classic" and much more recent stuff day in and day out. So for a long time I had very little Ellington, Coltrane, Miles--the music was in almost constant rotation on the radio. To this day, I don't own a Charlie Parker album, largely since I had Phil Schaap shoving it down my ears every morning.

So there are enormous gaps in my collection and, to some extent, in my working knowledge of important areas since often the occasional catch on the dial doesn't really suffice for getting to know a piece deeply.

Clifford Brown's one of those areas. Not that there's so much to hear, unfortunately, but I'm only shallowly aware of his work, I'm afraid, something I should rectify. I have a CD of the Brown/Roach group, the Basin Street recording, which is (obviously) pretty spectacular but aside from this one, that's it.

What I'll do, when the opportunity arises, is flip through old LP bins and pick out things by musicians I know I should be better versed in. I'm pretty sure what happened in this case, probably at one of the vinyl stands you come across in those NYC street fairs whose main purpose is to kill a sizable segment of the local population by inducing mass funnel cake ingestion. It's a reissue of a 1953 session that came out on Prestige, probably in 1971. It's a somewhat staid date, everyone behaving rather politely (the pieces are largely with French rhythms sections), though Brown sounds as sparkling and strong as ever. Nice, bloopy guitar break by one Jimmy Gourley on "Bum's Rush". [Just Googled ol' Gourley and seems he's pretty well known--entirely new to me! See what I mean?] Brown's own "All Weird" has a fine, slippery theme; Gigi Gryce gets totally lost in the thicket and Brown himself has a tough time negotiating it at first but then spirals up into some wonderful playing.

My mental list of Jazz Musicians Who Died Too Young is always, forever headed by Dolphy, but I imagine Brown (26) and Booker Little are up there pretty close.

Did Brown never play with Mingus? Seems odd, especially considering the Roach connection. Am I missing something?
Posted by Brian Olewnick at 1/28/2008 06:28:00 PM

I can assure you, whatever Web sources might indicate to the contrary, that Jimmy Gourley's not an especially well-known player.

Clifford Brown--aside from the discs with Roach, do check out his album with Helen Merrill. He gets off some killer solos on that one, especially "Yesterdays". (By contrast, he's in middling form on the album with Sarah Vaughan, for some reason.) -- Merrill's Brownie, recorded 40 years after the original date, is also worth checking out, one of the few tribute albums I like.

I'm not sure Brown and Mingus would have been a great match, as great as they both were. but it looks like Brown was under contract to Emarcy from 1954-56, and he died right around when Mingus started recording for other labels besides Debut, in 1956. I think the Roach connection is more a tribute to his range than anything else.

anyway, I know you like your haphazard shopping methods, but there's a great double CD comp of the Brown/Roach bands called Alone Together: The Best of the Mercury Years, pretty cheap and well worth picking up.

Seconds on Jon’s rec of that Brown/Roach Mercury comp, it’s a decent cross-section of their work together, readily available for a little over a sawbuck. And if your conscience can condone “gray market” releases, the Live at the Beehive 1955 2cd set on Lonehill is worth nabbing too, absolutely incendiary playing by all involved, though the fidelity is a bit flaky in spots. It’s fleshed out w/ material from Basin Street & Copenhagen.

Far as sideman gigs, Blakey’s A Night at Birdland 1 & 2 on Blue Noet would be my pick.

If one were to construct a matrix in which the x-axis represented jaw-quivering, gooey deliciousness and the y-axis, aorta-clogging unhealthiness, funnel cakes would be an extreme outlier.

Basically it consists of ribbons of dough, deep-fried, then doused with a pound or so (that's 2.2 kilos to you island folk) of powdered sugar.

Good catch, Jon. The merit badge from the Department of Weights & Measures is enroute. ;)

Shouldn't you be using paczi as a more timely example?

You know, to the best of my knowledge I've never had paczi, an intolerable situation that demands rectification.