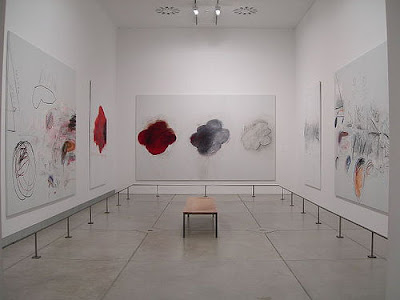 Wonderful and exhausting week thus far. Picked up Keith around midnight Sunday, spent a fair bit of the next two days going over various bits for the book.

Tuesday evening, we ventured out to the interim space for Issue Project Room, on the third floor of an ex-industrial building not far away from the previous site along the Gowanus Canal. It's a very nice space, a longish rectangular room with high ceilings from which hang their 16-speaker system. They're planning to move to a permanent site this spring; sounds potentially great, we'll see. Picked up Julien Ottavi after a comedy of errors involving Brooklyn street numbers and all was set.

Julien led off with a solo performance, much more tonally centered than anything I'd heard from him before, almost in dark-ambient territory. It's not my favorite area, but he handled it forcefully and you were pulled into the vortex without much trouble. Keith followed, creating one of those sets where things begin in a very hesitant, fragmented manner but before you know it, there's a coalesced, solid form, kind of a musical sleight-of-hand. The duo was a bit strange, Julien remaining in the same area, maybe even more "dominant", leaving Keith very little room in which to move. Again, Julien's music itself was pretty impressive, all roaring wave patterns, but the collaborative nature of the experience suffered somewhat. You could look at it as setting Keith with some challenges that were simply difficult to overcome with just resorting to competitive volume which he's not likely to do. Interesting nonetheless.

Wednesday, Jon treated us to an amazing lunch at the legendary Di Fama's pizza. It's a hole in the wall but has become quite the attraction featuring a de rigeur hour-long pie wait, which we experienced. Still, Keith and I were fascinated watching the owner at work (he and he alone makes the pies), treating each one as an individual creation, carefully pouring on a bit of olive oil, holding a handful of fresh basil and scissoring pieces onto the surface, giving the pie a last second once-over to determine whether or not it's good enough to go then, almost reluctantly, turning it over to the customer.

At IPS, Keith and Julien turned in a unique event of their own, performing Treatise while embedding within it several other graphic score renditions including Wolff's "Stones", Earle Brown's "Four Systems", Cage's "Variations II", a portion of Cardew's "The Great Learning" and a couple of Rowe's own. It was an extraordinary event, very different from a "standard" Rowe show (whatever that might be), episodic in a sense but never drifting, always changing approaches in a manner that was both natural and intriguing. You couldn't always, by any means, determine which piece was being performed when (unless you noticed stones being utilized, for instance), though prior to the onset, Rowe announced that people were entirely free to move about during the show, including to come up, examine the score and even ask questions. No one took him up on the latter, I don't think, but the general casualness helped the lengthy set a good deal as did the interplay between the musicians, talking over what to do next, how to handle it etc. in a refreshingly transparent way. A beautiful sequence, something I hope they do more often.

Keith and I went up to Dia:Beacon on Thursday, my second such visit, his first. Still a great, overwhelming place. If I have a general quibble, it's just that if given a choice, there are many works I'd rather experience by themselves, not in a grouped context. For example, there was a wonderful selection of 20 or so late Agnes Martin's, almost any one of which I'd happily sit with for several hours (at least!). Seen together, it's almost to much to grasp and process. But short of me coming to own or borrow one, not the most likely possibility, that's the way it is. Highlights included the Serra's (there should be music events scheduled for inside those things!), a large Bruce Nauman video installation in the basement and those daunting Fred Sandback yarn sculptures, among others.

Not having quite gotten my fill of long drives and museums, Keith, Jon and I headed down to Philly yesterday, through the rain, for a lengthy trek through the Museum of Art, again my (and all of our) first time. Impressive! Especially the modern section. Awesome Twombley room, a huge room with Kiefer, Richter and Polke, another incredibly strong room with a Rothko, two Newman's, a Kline and a Motherwell, all those Duchamp's. Well worth it. Also some great Eakins', an Ingres I didn't realize was there and numerous other, older beauties. Then over to the performance site, a historic house once occupied by Philip Syng Physick, a pioneering 18th century surgeon and, purportedly, the inventor of the carbonation process that led to soda. Nice old, creaky place.

Rowe was preceded by a duo of percussion and electronics. I forget the names but the less remembered, the better. Oy. He then proceeded to deliver a mighty, no-holds-barred performance, the likes of which I haven't heard from him for several years, at least since the Fennesz show at Tonic. Surging constantly, just billowing forth, very elemental and only just remaining under control, though ending in very, very delicate fashion with an attenuated soft drone. A great evening.

Out for drinks and food with the excellent Philly crew. Thanks for everything, Tim, Jesse, Dustin, Matt & MAP!

Home at 3:30 AM, again driving through a steady rain. Slept 'til 10:30....Too many new discs to listen to, including four from Ottavi and five involving Matt Mitchel and/or friends...

"He then proceeded to deliver a mighty, no-holds-barred performance, the likes of which I haven't heard from him for several years, at least since the Fennesz show at Tonic."

you're forgetting the one a few months later (also in 2004), at the first ErstQuake at Clemente Soto Velez, but otherwise, I thought the same thing, fantastic set.

also, no love for Hill Country? :)

Knew I forgot something. Awesome sausage and BBQ at Hill Country!

Nice writeup Brian, sounds like a great week. Good music and good art is such a nice combo, hearing about the quality of the Philly Art Museum makes me hope we'll be there for ErstQuake some year!

Definitely curious what your four Ottavi CD's reveal - it seems we have heard anything from him since the last N:Q disc.

Will do, Robert, after a listen or two. They're not necessarily new though, and not all by Ottavi: