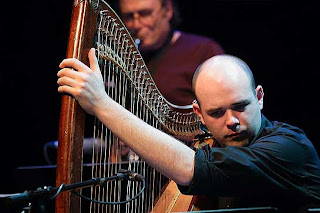 My review of Dörner's "sind" at Bags brought up the hoary question of whether solo improv recordings are on inherently shaky ground. The arguments generally fall into two categories: 1) that the lack of one or more collaborators tends to channel the music down a path toward hermeticism, self-involvement or, less charitably and quaintly Victorian-inspired, some kind of masturbatory exercise and 2) "music" gets sacrificed on the altar of technique, the recording turning into a "look what I can do" kind of affair.

I don't think either is necessarily the case (though of course both may indeed occur) and that the escape route is simply having something of deep musical value to express and staying as true as possible to its expression, regardless of the number of musicians its execution entails. To say that there's no such thing as an improvisation that could best be expressed in solo form seems silly. On the other hand, it may be true that as music edges into more abstract forms, pulling off a solo improv performance successfully may become a more and more tenuous undertaking. That's where having a solid idea in the first place comes in. I have no doubt that, all too often, someone thinks they should do a solo recording whether or not they happen to have an idea that lends itself to the format. That's when you tend to get the "catalog of techniques" approach, a very boring thing to hear no matter how imaginatively extended those techniques are. Although it's not so neat as that, I guess; I can imagine a given newly discovered technique opening the door to a hitherto unknown range of ideas.

But the general idea, something I hear often, that playing by yourself amounts to playing with yourself (again, as though that's an evil thing anyway, like it's 1860 in Puritan New England) seems misguided. I got to thinking about this again last evening, playing for the first time Rhodri Davies' new release on Confront (the title of which I'm blanking on at the moment). It's solo harp with e-bow and exists just fine on its own. There's no in-your-face technical prowess to be heard, no excessive arcaneness, just a delicate, ethereal series of overlapping hums.

To vastly different effect, the great Ferran Fages disc on Etude is all about emotional devastation, concerning private enough events that creating it in tandem with others would seem to be at least very uncomfortable if not unthinkable. I also have on hand solo saxophone discs from Lucio Capece (bb, a question of re_entry)and Martin Kuchen (Homo Sacer, Sillon) that, on first blush, strike me as successful gambits (maybe half and half with the Capece).

Anyway, rambling on a bit, just slightly rankled that solo improv efforts sometimes get dismissed out of hand, often unfairly, without giving the actual music an unbiased enough listen.
Posted by Brian Olewnick at 10/05/2007 10:39:00 AM

Rhodri's album is called Over Shadows, a title refernced from Redell olsen's book Secure portable space which I have never read.

Do people knock EAI solos often Brian? A scan through last years audition poll of people's favourite discs of the year saw six solos in the Top20. I imagine this year's list may well have a solo at the top too.

(thanks for the title reminder)

I often pick up an undercurrent of antagonism toward solo eai ventures but maybe I'm over-reacting. I get a sense (certainly not from everyone) that implicit in eai/improv should be some kind of communitarian ideal that necessitates more than one participant. To the extent, if any, that people think this, I disagree, considering it a side-component subject to what the music requires.

(I can't imagine what potential top 20 solo recording you're referring to....)

...and we played an excerpt from "Over Shadows" on last week's show, after a track from Mark Wastell's recent solo improv cd, "Come Crimson Rays". I think they're both good examples of strong individual statements, and there's nothing wrong with that.

The undercurrent is there Brian, but it tends to come from a small and diminishing fast section of the listening audience that tends to place the social aspects of improv alongside and often ahead of the musical. Whilst I understand and value these elements too, as a listener I want to hear good music first and foremost, and sometimes the level of focus and singular vision that is achieved by a single musician can be even more interesting than the interaction of two musicians. T
here are a few musicians I much prefer to hear solo than in collaboration. Will Guthrie and Joe Colley are two examples that spring immediately to mind. Then there are a few names that I think the reverse about, Toshi being the obvious example for me.

As for Al's gratuitous plug above, I think its appalling that he just strolls in here and starts posting links like www.auditionradio.info everywhere. Before you know it he'll be telling everyone that we are on air every Sunday at 7pm in London or via the internet at www.resonancefm.com. Disgusting eh?

I personally think the increasing trend towards solo recordings in EAI over the last few years is a major problem for the ongoing health of the area. some of them are great, some musicians are better solo than in groups, but the fact that there are fewer and fewer truly successful collaborative discs is quite possibly a sign that the area is in a bit of danger overall.

Well I guess thats just a matter of opinion. Whilst I agree that the number of average to not so great collaborative discs has increased I personally think there are also more really great discs coming out than before. There's just more releases these days, spread over a wider geographic area and a wider number of labels and you just have to search through more average material to find the gems.

one problem that EAI is running into as a community is that when you build a worldwide (or close to it) community of musicians, it's hard for some of the most simpatico of partners to get together very often (Raku Sugifatti, Keith/Toshi, Dorner/Barnes, Sachiko/Sean Meehan, etc, etc). this is a major factor I've been considering when deciding on future Ersts, I think we really need more strong working combos in this music right now.

"Mike Douglas is the only white man who ever made me warm."