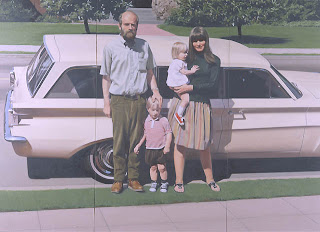 Bored yesterday afternoon, I was futzing around looking for a Windows background that might baffle fellow workers. I'd been going with one of Gerhard Richter's "Baader Meinhof" series for a while, one of a prostrate dead body, looking like a grey smear across a black ground. Looked rather striking and I'll probably bring it back.

Part of the qualification is a horizontal orientation and a fairly large source reproduction to minimize distortion and pixelating. For a couple days, I had Velazquez' divine "Las Hilanderas" but its busyness was a bit too distracting. Searching for a darker image but still thinking of that period, I came across a great Zurbaran still life, several pieces of pottery against a black background. It was a little too horizontal, though, and ended up on the screen a bit squished.

Then I thought of Robert Bechtle.

I was a fairly big fan of the so-called photo-realists back around '72-'74, about when they began to enter the public consciousness (though many had been plying this tack since the early 60s). The more interesting of them considered their work as an extension of color field painting, something that's clear in work by people like Chuck Close, perhaps less so in Estes, John Salt, Ralph Goings, etc. but I think it was there. Not that I immediately or always appreciated that aspect of it; to me it was also cool that some artists were brazenly thumbing their noses at the academy of abstraction and revisiting a corner of realism, albeit one distorted by photography. Eventually, most lapsed into stultified repetition and, moreover, came to reveal a certain amount of shallowness in conception and I came to more deeply enjoy those realists who worked from life--Alfred Leslie, William Beckman, Claudio Bravo, Gregory Gillespie and others (not that they, too, turned out to be terribly consistent--they didn't).

But I always liked Robert Bechtle. Why, is hard to say. Maybe because his work is so blank. Cars in front of houses... 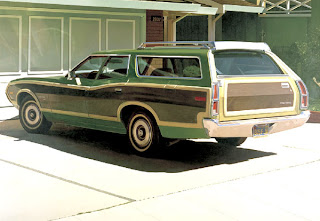 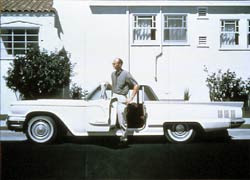 No more, no less. No overt commentary, no striving for effect. But laid out almost as beautifully as a Rothko.

I always especially loved the family snapshot at the top, my current wallpaper (which is in the Whitney Museum in NYC). Awkward, throwaway, extremely real as an image from around 1968, more so than romantic hippie evocations or what-have-you. But with a photographic patina that wraps everything in a dull gloss, comforting and chilling at once, the having-it-both-ways idea already nascent in California culture of the time.

There was a great Bechtle retrospective in Fort Worth in summer 2005 which was fascinating, not least 'cause it included a lot of paintings that weren't cars in front of houses. The show was organized by SFMOMA & travelled to a few other institutions. I'm pretty sure there was a catalog too.

None of which address the issue of desktop images, but hey.

Hi Herb. When I was looking up Bechtle images, I saw a bunch of more recent work that I was unfamiliar with, lotsa landscapes. Should check them out further.

And one painter I neglected to mention who works in the realist tradition and whom I love (in addition to possessing, possibly, the greatest name in history) is Rackstraw Downes, who's done some amazing Texas landscapes iirc.

Looking around a bit, I found this post on Bechtle at a blog written by Christian Patterson. Annoyed, now, to see that there was a Bechtle show here late last year that I totally missed.

When a friend of mine and I were looking at Bechtle's the station wagon at SFMoMA, he mentioned, offhandedly, "There's something about California light that's so distinctive..."