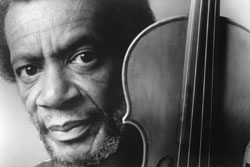 Woke up this morning to the awful news that Leroy Jenkins had died of lung cancer at the age of 75.

Ever since I first heard Jenkin's piercing, keening violin--probably in the Desert Band portion of Escalator Over the Hill--he'd been my favorite violinist, as well as one of my special favorite musicians. Whatever "technical" limitations he may have had (as ridiculous an issue as that is in the case of a player as inherently musical as Jenkins was), there was no one who could wring such heart-rending bluesiness from his violin.

I think I only had the opportunity to see Jenkins perform twice. Once was the solo concert at the Washington Square Church (1977?) that was released on India Navigation; the closing "hymn" there was just stunning. The other was the only time I ever saw the Revolutionary Ensemble, at the Tin Palace probably around the same time. An amazing show, one that has stayed in my memory for decades.

The RE albums remain classics as is his lovely recording on Tomato, "Space Minds, New Worlds, Survival of America". The last track on that one, "Through the Ages Jehovah" has one of the most gorgeous melodic lines I know.

Thanks for all the beautiful music, Mr. Jenkins.

Swift Are the Winds of Life.