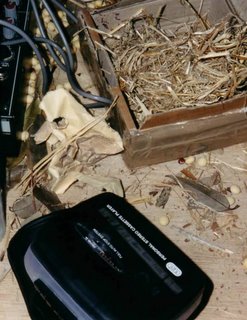 I often have this problem with sound installations in galleries and it's usually not the sound. It's the gallery.

I find it's almost always the case that, at least in my imagination, the sounds in question would work far better in some more public space, some location not specifically art-oriented. Back in the late 70s, one of my favorite pasttimes was to amble up to Times Square to experience Max Neuhaus' installation beneath one of the ventilation grates on one of the traffic islands there. A constant, rich thrum emanated from parts unknown somewhere under the soles of the people making their way to work, to the theater, shopping. Scarce few took notice, some occasionally glancing down quizzically. The sounds blended in beautifully with the unceasing traffic.

I went to experience Olivia Block's installation at the Diapason Gallery earlier this evening, a loft space located in one of the more unlikely NYC areas for anyone expecting to find sound-art though, in fact, it's only about three blocks south of the erstwhile Neuhaus site. Upon ascending the stairs to the second floor space, you're greeted by a sign asking you to remove your shoes before entering. Opening the door and parting the black, velvet drapes, you're in a space about 20 x 50 feet with floor mats, small rugs and cushions. The installation runs from 6 to 11PM on each Saturday in February. When I arrived, there were five or six people sitting, facing a couple of speakers at the street-side of the room which was darkened and, as near as I could tell, silent. Taking a floor position against one of the side walls, I tried to hear what if anything was happening. I wasn't sure. Some street noise fed in, but not much. There was an electric hiss, though I imagined it was from the speakers themselves. After two or three minutes, gentle whistling wind sounds grew in volume along with a general density of "open air" sound. It travelled from the front of the room to the back, taking about a minute to make its transverse. Another few minutes of silence then a similar though different set of sounds derived from field recordings. This seemed to be the pattern, sometimes wind-oriented, sometimes gentle rain. The piece is titled "Under Your Breath".

It was fine as such but my overwhelming feeling was how great it would be if it was installed in some large, relatively quiet public space--like an old library. More to the point--and again, as I think I've written before--without the general knowledge that an "art event" was taking place. How wonderful it would be to be sitting, reading, studying or writing, only to have these odd sounds, sounds associated with the outdoors, emanating from concealed speakers in the rafters every few minutes. There's something about a gallery space, even as lovely a one as Diapason, where listening to recorded music seems somehow off, kind of an a-social activity in a social setting. It's different, in that sense, than hearing live musicians though why that is, I'm not sure.

There was a second installation, "Angry When You Sleep", in a previously unvisited-by-me room in the rear of the space. While sitting in the main room, I experienced the amusing effect of people opening and closing the door to the other. As the sounds from the second space were far louder (though effectively shielded by the door), it was as though you became aware of a party occurring next door. The room was small, about 10 x 12 feet, illuminated by only a single, light blue bulb. In addition to a few chairs and cushions, there were eight speakers situated symmetrically. Block's work itself was far more immediately engaging, consisting of sounds drawn from closely miked dry leaves and beans being swirled around inside of metal pans. I would've guessed that there were large sections devoted to wet pebbles sliding around a wooden drawer--there was a very, very liquid effect to these ears--but, that just shows what I know. The piece ran about 10-12 minutes and then repeated (I'm fairly sure there were no variations, that it was the same thing each time, though I could be wrong). It was a wonderful work, rich and layered, wherein one was constantly forming mental relationships between, erm, blocks of sound. I stayed for four iterations.

For the first three, I was in the company of other attendees, from one to five at various times. This made for an additional...problem. Perhaps it's just me, but there's something awkward and a little uncomfortable sitting in a small room with other people listening in silence to music issuing from speakers (I mean, outside of a Record Club, I guess, where dorkitude is a given). The listening aspect is too akin to being at home enjoying one's stereo but here there's the added complication of not being able to entirely relax (again, maybe just me) as well as the anticipation of movement/interruptions from the others, including the door opening and closing at any time.

When the only other person left after the third time through the piece, I shifted myself to a central location and, happily, was the sole occupant for the duration. Major difference! Not only did the piece work even better sonically, the sounds becoming entirely immersive, circulating around the small space, but I could devote 100% of my concentration to it. It worked beautifully, as fine a piece from Ms. Block as I've heard (and dedicated readers know how highly I esteem her recordings). Incidentally, neither installation included any of the more "traditional" elements she often uses, horn chorales, etc.

Even so, I could still imagine the work being that much more effective in some public space, a more open, noisier one than a library--perhaps an urban park; I was thinking Bryant Park a few blocks away. Could be pretty spectacular there.

When I emerged back into the larger space I found I was the only person left in the gallery. I decided not to push my luck though and, after a close examination of the speakers to determine that, yes indeed, very low volume sound was constantly issuing from them, I made my way home.

I agree with you that the presence of other people makes it awkward to really listen to recorded music. I get that even when I'm at home!

See now there's a marketing idea for you: get Neuhaus to whip up a special designer bon-bon with that Erstwhile "E" on top. Give one away with each ticket to the next fest and sell small boxes of four for, say, $50 each.