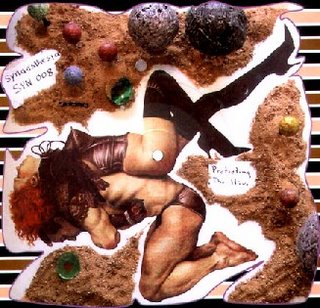 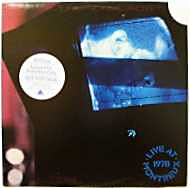 My turntable's been broken for a while now, probably the better part of a year. It's a Nikko, one of those with the tone arm that slides itself at a perpendicular angle to the, whaddya call it, the little nubbin that holds an LP in place. It had been cantankerous for a while, not always agreeing to lower itself to vinyl; it's not like a regular stylus that you can manually place on the disc--if it doesn't wanna go, there's not much you can do about it. Makeshift solutions like stacking five or six LPs to bring the desired one up to the level of the needle met with paltry success.

I have about 1,000 LPs and I do still enjoy playing them. Additionally, some people inisist on releasing new stuff on vinyl, once in a while, occasionally posting them my way for review. Philip Samartzis, for instance, put out a very fine disc called Touch Parking last year. I had to ask him to send over a CD burn so I could actually hear it. Incidentally, re: that record and presumably others, it seems like huge advances have been made in the art of etching designs onto vinyl. I remember being thrilled at, iirc, opening a live Jethro Tull album from around '71 and discovering a translucent purple disc inside. Yum! Well, "Touch Parking" looks like this: ....Well, like the image above. I haven't worked out how to insert images anywhere but at the top of the current post yet. Hmm.....

So, as I amble through my collection, I come across the odd album, like Muhal's "Spiral", that I don't have particularly strong recollections about and I can't play it to refresh those memories. I know it's a live performance, I think at Montreaux (?), it's three pieces (even this--I'm writing from work and can't directly check, but that's my memory). There's one, probably called "String Piece" where the action takes place inside the piano. There's another where he indulges in what would become an increasingly unfortunate tendency toward academic atonality, by no means his strong suit. But there is one beauty, I believe called "C Song", that fits in nicely with much of the work on the 'Afrisong' LP. He's a frustrating musician from that standpoint, exhibiting a real wide range (for my taste) from gorgeous to all-but-unlistenable.