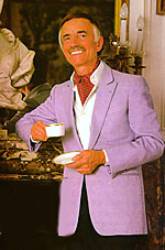 Last evening was a rare thematic Record Club: Guilty Pleasures. This is a toughie for me. There's honestly very little, if anything, that I derive pleasure from musically which I feel the slightest bit guilty about. It's just kind of a foreign concept to me. On the other hand, I can readily apply it to other forms, say, movies. There's a slew of well-constructed but essentially awful Hollywood product which I can happily watch, acknowledging its core vapidity but willingly allowing myself to be sucked in and manipulated. Even if I feel guilty about it afterward. The guilt will even rebound while watching something profoundly beautiful, like Ozu's "A Story of Floating Reeds". In the middle of viewing it, the thought might well cross my mind, "Why do you ever watch that other garbage?" Good question. But I do.

But with music, it doesn't work that way; I just don't listen to the equivalent of "Die Hard" or something. Books too, I guess. I mean, until I'm trapped in a cell for life and it's the only material available, I'll simply never read a Grisham novel. When this theme was determined, the very first thing I thought of was a recording I actually didn't own though I had it back when it topped the US Hit Parade, in February 1968: Paul Mauriat and His Orchestra - Love is Blue. That's the debonair Mssr. Mauriat up top. As a 13-year old, I absolutely loved this song. I imagine, were I able to search back even further into my memory with any accuracy, that I already had affinities for both instrumental music (I have vague notions of greatly enjoying "Wipe Out") and excessively romantic, that is to say, syrupy, melodies, both embodied in this piece. Rock bands had been incorporating faux-classical motifs and instrumentation into their songs for a year or two, fitting in well with a budding effete-ness in my own formative aesthetic. In the next few years, for instance, I'd become enamored of groups like The Nice and, a bit later, (*gulp*) ELP. The latter's third LP was my first exposure to "Pictures at an Exhibition", I shudder to say. King Crimson would, without bothering to credit the source, use the Mars theme from Holst's "The Planets" in a puportedly epic song. Little by little, I began to realize there was this thing called "Classical music" out there and, I suppose not unnaturally, I was drawn to the Romantic warhorses, Beethoven (the symphonies not, certainly, the late string quartets!), Tchaikovsky (The Piano and Violin Concertos!), Rachmaninoff (the 2nd....). This effect lingered on in various guises for a long time, much to my detriment. For example, I grew to know and love much of Prokofiev (still do) but didn't get around to the inarguably more profound Shostakovich until much later and still have only made a dent.

In any case, I trace much of this back to "Love Is Blue". I had it on 45rpm, played it incessantly. This at a point in time where I was beginning to wake up to Hendrix et al. Weird juxtaposition. I thought it fit into the guilty pleasures category simply because I'd long since understood how treacly and in many ways awful a piece of music it was yet, when I encountered it here or there in the intervening years (likely more often than not over loudspeakers in a mall), I still felt fondly about it; it still evoked warm 'n' fuzzy feelings. So I went down to Tower on Thursday, not at all sure where to look for it (embarrassed to ask!) and, indeed, not certain whether the store had an Easy Listening section. Well, they do, up in the Classical Dept. and, lo and behold, there's a Paul Mauriat section. There were two discs containing the song; I chose the one with the gooier cover.

The Record Club group is pretty much a half-generation younger than myself so they didn't have any direct connection with the work, though I think most recognized it in some vague fashion. Its charming awfulness was impossible to miss, though. Their selections were, in large part if not entirely, from similar points in their own development though, for a geezer like myself, this meant baffling choices from the late 70s-early 80s, things I could easily understand as far as their awfulness-appeal, but had a necessarily tough time directly connecting to. Joan Jett, the Bee-Gees, the Knack, Neil Diamond.....

My second track was King Crimson's "I Talk to the Wind" from their 1st album, my "all-time" (like I knew anything) favorite record shortly after it appeared in, iirc, late 1969. I'd long since traded in almost all my LPs from that era, but I re-purchased this on disc several years ago, curious how I'd react to it not having heard the music for some 25 years. Not surprisingly, things like "Schizoid Man" held up fairly well and, as I expected, the free improv portion of "Moonchild", baffling to me as a 15-year old, sounded fresh and well-placed inside the British SME/Iskra 1903 tradition of the time. Also not terribly surprising was how unlistenable I found the title track and "Epitaph", two pieces my teenage brain found awesome. Most surprising was how lovely I thought the melodic line from "I Talk to the Wind" sounded, how appropriate the flute playing, how delicately right I found Fripp's guitar pings. I really liked the song. The lyrics however, courtesy Peter Sinfield (I think KC was the only band ever to have, as a regular member, someone whose sole duty was to provide lyrics) are entirely cringeworthy:

Said the straight man to the late man
Where have you been
I've been here and Ive been there
And I've been in between.

I'm on the outside looking inside
What do I see
Much confusion, disillusion
All around me.

As always, an extremely enjoyable evening, even if suffused with righteously miserable music.
Posted by Brian Olewnick at 7/10/2006 10:30:00 AM