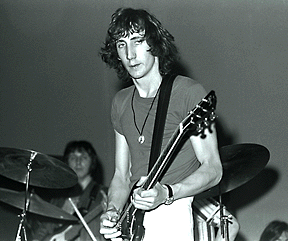 Plopping into bed last evening, I switched on the TV and found myself near the beginning of a documentary or sorts on The Who, "Amazing Journey", I think it was called, from 2007. Now, I was only a bit of a fan in my teens, owning only "Tommy", iirc, seeing them once live at Tanglewood in 1971 (sharing the bill with Jethro Tull and It's a Beautiful Day, both of whom I probably preferred) but friends of mine, the Steins, were Who fanatics. They were also fledgling filmmakers and, that day, we went around back of the stage to the trailers (you could do so then without fear of being tossed bodily by superstar protection), chatted with Entwhistle (very pleasant) and they got Daltry to take their camera (Super 8?) into the trailer to film goings on within. This led, eventually, to Jeff Stein filming "The Kids Are Alright".

I never saw that movie until a couple years ago when a co-worker happened to bring in the DVD, which I borrowed. It was interesting, kinda, especially the earlier footage, less so post 1970 or so. I never could tolerate Daltry, but the rest of the band was relatively OK. I knew that Townshend had attended the Destruction in Art Symposium held in London in September, 1966 which featured Gustav Metzger and his corrosive, eroding "paintings", Yoko Ono and others, including AMM. Watching film of Townshend at the more extreme end of his guitar abuse (sliding it up an down the mic stand at Woodstock, for instance) I could only wonder if he'd seen Keith and absorbed a thing or two. I've made a few attempts to reach him through the Steins and others, so far to no avail; nothing major anyway, more a curiosity.

In the documentary last night, he mentions the Symposium and having learned about the nature of performance art there. Incidentally, in conversation, he sounds remarkably like Keith in his phrasing, etc. though, to be sure, on a different level as to meaning and understanding of the larger world outside his domain. So you have this young musician with adventurous tendencies in 1966, in London, where all manner of exciting experiments were taking place. But, and he's very explicit about it, he quickly realizes that he can be paid for writing three-minute songs that many people like and he wholeheartedly embraces this, creating the foundation for his subsequent career. I hadn't realized they'd done a Coke commercial back then, satirizing (lightly) pop ephemera while at the same time reaping the benefits of same. It's a little startling, given his obvious intelligence, to hear him--without much of a trace of cynicism--make no bones about having made such a calculated, commercial decision. All fine and dandy, his business as far as I'm concerned, but it was the kind of thing that should be seen by folk who somehow hold up rock icons like Townshend as epitomes of creative virtue.

So The Who go on and make relatively exciting rock for a few years (I've always thought "My Generation" one of the better early rock songs and that the stutter therein was a rare example, in the genre, of inspired poetry) until succumbing to bombast with Tommy and most of the rest of their subsequent output. This is brought to an unintentionally gruesome close with the final portion of the film, which documents the recording, in 2003, of a new song ("Such a Good-Looking Boy", I think?) with a rather portly Greg Lake on bass and a youngster (Ringo's son?) on drums, along with a pianist and back-up guitarist. Here, in a multi-million dollar studio, the musicians sit in isolated rooms, cobbling together in good corporate-rock fashion, a machine of a song perfect for boomer airplay and eventual use as thematic fodder for an ESPN feature on an aging athlete one day, having entirely, utterly lost the dollop of freedom, of devil-may-care attitude they had 40 years before. It's become pure product, the predictable outcome of the decision Townshend had made in 1966. And they're very happy with themselves.
Posted by Brian Olewnick at 1/06/2009 08:23:00 AM

I never did much like Tommy, but a lot of the earlier Who stuff is really amazing. It's probably not a radical opinion or anything, but they were never better than Live at Leeds, which captures the peak of their energy and muscular technical virtuosity.

I also always find it interesting to hear about the random intersections of these rock dinosaur musicians with more esoteric musical domains -- along the same lines as the stories about Keith Rowe being asked to join Pink Floyd.

For historical accuracy's sake, Keith wasn't ever asked to join. Barrett was the only member really interested in what he and AMM were doing, so even after his departure, it would have been unlikely for Waters and crew to invite Keith in. The interesting thing is that kind of invitation wouldn't have been out of the realm of possibility then, things were fluid enough. My favorite example is Lol Coxhill being considered for membership in the Kinks.

I'm proud of the fact that I never listened to Tommy all the way through, which I considered pompous tripe. Funny how their careers have morphed considering an early (and good) lp was titled The Who Sell Out.

Wait. You mean you were already a curmudgeon at that youthful age? Excellent!

oh, you know, townsend has a family to feed and all that. early who is really good, though. and wasn't baba o'riley supposed to be influenced by terry riley or something?

More a blatant borrowing than an influence I think, though at least they paid him credit in the song title. Even there though, it's used as an ornament really, a hassock of sorts for the obligatory power chords and macho screams.

you should really hear this then. great alan licht remix with some blondie song thrown in too:
http://www.ubu.com/sound/licht.html

"bridget o'riley," at the bottom.

i got no problem with power chords! the early who is just great, compact song writing, noisy in places, good vocals. also, come on: KEITH MOON.

I decided to leave it out of my original posting--too much bitching--but...

The documentary had individual sections on each musician. The ones on Entwhistle and Moon concentrated on their unusually imaginative and creative playing. Now, within a rock context, this is certainly true; neither player confined himself to time-keeping or pacing the central melody. Though even in a 60s rock superstar context, it was hardly unique. Bruce and Baker did the same in Cream, Mitch Mitchell with Hendrix, various members of the Dead, Canned Heat, etc. It's more when looked through the lens of the enormous amount of corporate pap that arose in the wake of Woodstock that this sort of playing seems extraordinary.

Even so, it's also not as though bassists or drummers playing free hadn't been occurring in the world outside rock for quite a while. In the film, there's no mention of the Jimmy Garrisons or Charlie Hadens or Ed Blackwells of the world; insularity is in full effect. At one point, when talking of Entwhistle (who had an early schooling in brass instruments), Townshend says something on the order of, "Well, a lot of his playing came out of..." then he twiddles his fingers in front of his face in a sarcastic imitation of a trumpet player..."...that kind of stuff." Very dismissive.

I daresay if you had been interviewing Mitch Mitchell, he'd straight up have talked about Elvin Jones. Same with Baker. But no, we have to preserve the myth that corporate rock acts like The Who sprang full blown into the world, are natural geniuses, etc. ad nauseum.