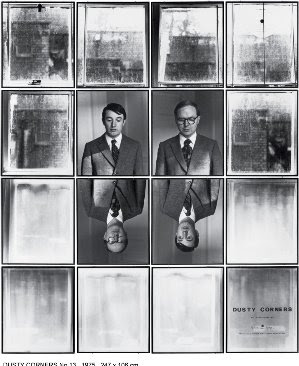 My lovely niece Tiana came down from Poughkeepsie yesterday for some art-gazing. We walked down to Chelsea, making a point to stop in at Black & White where my friend Derick Melander had a piece, a curving wall of folded clothing, arranged so the colors flowed rainbow-like, very entrancing. Strolled over to Pace Wildenstein for the Jim Dine show, Hot Dreams, a wild mass of photos, prints, writing, sculpture, books, etc that was overwhelming in a sense, but maybe a bit to glossily handsome for its own good.

We then journeyed out to the Brooklyn Museum which I hadn't visited in perhaps 15 years. Its extreme renovation back around 2003-04 had entirely escaped my awareness; it's not longer the pleasant but slightly stodgy place it used to be. There's an interesting (permanent) feminist gallery that includes Judy Chicago's "The Dinner Party", making for an nice contrast to their old stock, including the still-wonderful "A Storm in the Rocky Mountains" by Albert Bierstadt.

The most enjoyable surprise though (I hadn't checked their site before going) was a massive exhibition of the work of Gilbert and George. Now I've seen their work since the early 70s (heard it, as well) and probably seen an actual piece here and there but it had never really impressed me one way or another. Here, however, in large rooms filled with their enormous, color-saturated, wildly inventive panels, I have to say I was mightily impressed. The initial surface allure, the semi-Rohrschach'ed images, the in-your-face coloration all mask a great deal of subtlety in image manipulation as well as--ironic given their air of studied detachment--a great deal of emotion, from tenderness to rage. Additionally, the relatively rare monochrome pieces, like "Dusty Corners" above, added a layer of quietude and contemplation, very beautiful.

Too much to absorb in a single visit. I was refreshing my knowledge of them and their idiosyncrasies on-line this morning...Pretty amusing in their (so to speak) single-mindedness. More investigation required.....
Posted by Brian Olewnick at 1/11/2009 01:25:00 PM

Hi Brian, Happy New Year, albeit slightly belatedly. Interested to hear your thoughts on G & G. I can't recall if I have seen their work in the flesh, if I have the experience has left no impression on me whatsoever and I feel completely cold whenever I read anything about them. I really don't like feeling indifference to an artist as I feel it is my fault for not giving them enough thought or time. Maybe it is the sort of work you need to experience in an exhibition, however if you do any further digging around on the net or find an interesting book on them please share your findings.

I've looked out my one and only book, introducing Gilbert and George but whilst browsing amazon I thought I would see what is available on them. There is what looks to be an interesting two volume set: Gilbert and George the complete pictures 1971 - 2006 at a very reasonable £40

Hi Lolabelle. Yeah there was a book for sale there that I believe documented a recent show at the Tate? Looked fairly comprehensive but, as you mention, they're the type of work that loses a lot in reproduction and diminution of image. The saturated colors never look the same and the somewhat threatening sense you get from their size is, of course, lost. Although, as I mentioned, I liked some of the quieter b&w pieces maybe the best and they'd likely translate reasonably well.