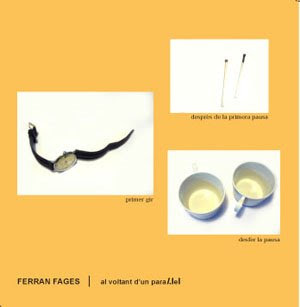 One general aesthetic notion that unfailingly fascinates me is what I think of as the "pendulum effect", that is, when a form or individual artists swings between one (ostensible) pole and another, picking up information from each and applying it across town, so to speak. So, an abstract painter might return to a kind of realism, but it will be informed from lessons learned in abstraction and, inevitably, emerge differently than it would have otherwise, generally reinvigorated. Fages, for a while now at least on his solo projects, has "returned" (I imagine he never left) to a kind of traditional approach, the guitar played as a guitar in a fairly tonal, very seductive manner, melodic after a fashion, intuitive. Quantifying exactly how it's different from what would have transpired had he not been involved in freer formats is, to be sure, a fool's errand, but one has the strong sense that it's the case. The pieces here are quite overtly beautiful, somewhat self-similar, Fages spending much time in the lower registers, brooding, allowing tones to hang, contemplating them with a certain melancholy. Take Bailey at his most tonal then up that tonality by 50% and you're in the ballpark. Lovely disc, well worthwhile. 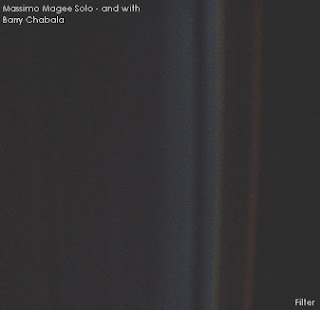 There's relaxed and then there's relaxed. Magee trawls perilously near whatever the dividing line is (if it is) between purposive playing and, well, less than purposive playing. At least, so it seems to me here. If I don't listen closely, it sounds fine. If I do, I find myself wanting more cohesion, more intent. This may entirely be a failing on my part, seriously. This is one of those recordings that I wouldn't be at all surprised to return to in a few years and say, "Oh sure, of course, that's what was happening." For now, dunno. Two cuts here; on the first Magee is solo for some 26 minutes, with a bunch of noisemakers, some electronic, and a tape of himself on soprano sax recorded just prior. The often free/avant style of the sax bothers me on the one hand but, when sliced and diced, not so much. While there's some degree of layering, there's more a sense of a fellow wandering about the room, casually triggering this or not touching that, not very concerned as to the outcome. (Watch, I'll find out that the whole escapade was pre-programmed down to the second). Still, it's all about choice-making; the interesting thing for me, here, is that after several listens, I remain ambivalent about whether I think his choices were apt or if aptness isn't the relevant criterion. Barry appears (via long distance, non-synchronous playing, I believe) and adds some more "traditional" consistency with delicate notes amongst the Mageesian detritus. Intriguing disc.... 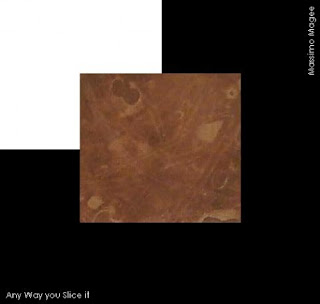 Massimo Magee - Any Way You Slice It (Array Music)

Similar in some ways to the above, this one has a more linear character, more thoroughgoing structure, due in large part to the consistency of underlying, quietly noisy sounds and the more overt saxophonics (tenor and soprano) atop. Magee, in the notes, mentions using the recording itself as a kind of instrument, freely utilizing "start/stop/pause/rewind" which is apparent at several points. When the tenor, some 25 minutes in, launches into more traditional playing (David Murray-ish, that is) including, um, "Mack the Knife", it's more problematic, though I'd assume Magee acknowledges this and wants us to deal with it. Again, intriguing...

hi brian, thanks for the mention. my was indeed done after the fact and long distance. what i did was take massimo's recording and process it via a computer program. the program changed playback speed quite a lot and quite often resulting in what a friend of mind call the ADD version of the piece. i added no new material at all.

hi Brian, thanks for listening!
and thanks for taking the time over these and posting your thoughts.

If my work has managed to be intriguing and from the tone I read somewhat puzzling to the man who must have heard almost everything in this area of music by now, then something, for sure, has been achieved!
By way of explanation, I suppose my focus is on taking those 'traditional' free improvisation concerns like total improvisation, an openness to whatever might come out in the moment of improvisation, the murky waters around non- and pan-idiomatic playing, and I suppose a surrender of the ego (although I acknowledge this is somewhat problematic in solo work, I think the highwire act on the line between purposive/non purposive is closely bound up with this) and applying them to their fullest extent and taking them to the extreme. I suppose in many ways my goal is not to produce music, or even art, but improvisation.

Improvisation as the endgame rather than a means to an end.

Other concerns enter the fray also, of course, like 'filtering' in 'Filter' and other things elsewhere, but the central concerns, I think, are essentially improvisational.

thanks again, Brian!
and good to see you, Barry ('ADD version' - I like that!)

Was imposing expectations on the piece with Barry or was there actually more heard guitar in there? Probably the former!

Thanks for the additional comments, Massimo.

You're very polite about those meandering Arrays. I couldn't take them a bit.

They certainly meander, but (ahem) the manner in which they meander still has me on the fence. I can imagine, in the future, both feeling the way you do and possibly enjoying them more than I do now.

listened to that piece again brian, nope - no guitar from me! got me wondering myself there for a min.