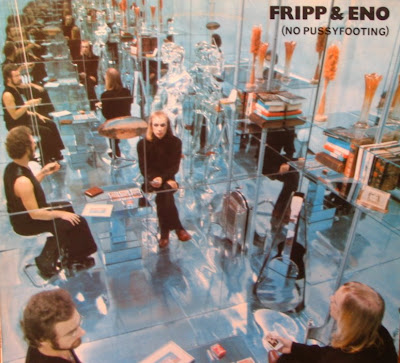 By 1974-75, I was over my youthful love of all things Crimson ("Red" was the last album of theirs I bought). I was in school in Boston and, though I was seriously short of cash, I'd still trawl the local record stores and scrape up enough for the odd purchase. There was one in Kenmore Square I'd hit regularly. This one time, I noticed (how could you not?) the then-current Roxy Music LP with the semi-naked women on the cover; it intrigued me. Next to it, however, was displayed a rather fascinating image, that of Fripp & Eno's "No Pussyfooting". The Crimson-oid itch returned. I'm pretty sure I hadn't heard of Eno at this point but between the cover, Fripp and seeing that the album contained two side-long pieces, it was enough to get me to pull the trigger.

I'm not sure what sense it would make to classify this as "rock", but to the extent one does, it still remains a major favorite of mine from the genre and also served to open me up to Eno's work. Interestingly, though, not to his pop recordings. It wasn't until my baby brother Drew played those for me around 1980 that I discovered them.

Ah, that "No Pussyfooting" cover! I imagine the story behind it is around, but searching on Willie Christie, who's credited with cover design and photography, doesn't yield much of anything. I've always read it as analogous to Eno's later quasi-minimalist experiments. You're shown four images (including the gatefold interiors) that are structurally identical, albeit in two mirror-image pairs, but most of the items contained within, including the two people, are subtly shifted or exchanged for each shot. Captured me immediately, lotsa fun.

There's an exceedingly poorly written wiki article here that documents some of the methods employed for the recording and also, humorously, makes reference to the apparently still negative reaction to Side Two, "Swastika Girls", as opposed to the more easily digestible proto-ambient first side. Ree-dik-a-luss. For myself, it holds up just fine, Fripp in excellent form but, more importantly, Eno discovering a combination technique and general approach that he's exploited wonderfully, its excitement still clearly fresh. 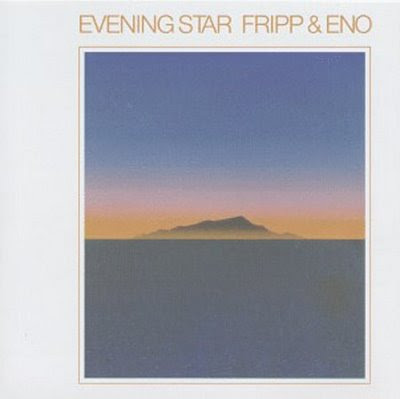 The follow-up, 1975's "Evening Star" is a half and half affair. Side One turns decidedly in the direction of what would soon come to be called Ambient Music, taking the previous album's approach and softening it a bit, blurring its edges. Taken on their own though, without worrying about what they'd help spawn, the tracks are really not bad at all and, if one listens, there's even a spot of roughness here and there.

Still, it's Side Two that holds the attention. Firstly, what a title. "An Index of Metals". This may be nostalgia talking, but that is so cool. When it showed up in the local record shop (late '75, I think), the proprietor, Gary Velletri, a big Canterbury-head, pronounced that this track portended the death of rock. If only. You can almost see what he meant though, the way rock elements are splintered into small shards and strewn across a very bleak landscape. Fripp's playing is wonderfully flat and bitter, dystopic in the extreme. High, sine-y tones pierce the miasma, other lines crackle like faint radio bursts. I've said it before--it's not as though eai would have been different had this recording never been made, but it does have more than a little in common with some work of a couple decades hence. (Huh. I just noticed that Malcolm Le Grice is thanked on the sleeve! Interesting that a former roomie of Rowe's intersects here...). In any case, it wears very well, maintains a good, desolate, airless keel throughout. Might be my single favorite Eno-involved piece, for that matter. Unsurprisingly, I come across references to this piece probably less often than anything in Eno's oeuvre.
Posted by Brian Olewnick at 1/17/2009 08:01:00 PM

You know, having read your posts about your alphabetical trawl through your vinyl so far, and given that pretty much all of the surviving vinyl I own contains either indie guitar music, early eighties hip hop or acid house, I really didn't expect there to be any crossover in our collections...

But hey I own a vinyl copy of No Pussyfooting too! No idea where it is right now but I have it someplace. I remember being somewhat baffled by the sleeve too, though not by the music, which I hated when I bought the disc and probably don't like much these days either ;)

omg I own No Pussyfooting on vinyl too. we could have a party of sorts. I think this is a fantastic record to hear on a platter. love the cover too. fun.

I've been a bit curious to hear the No Pussyfooting re-release, with side one at half speed and side two in reverse. Half speed worked pretty well on the reissue of Folke Rabe's What??, a slightly earlier work with similar stance against the speed and intensity of much of the music of the period.

An LP that Richard, Brian and I have in common!

Hey Caleb, hadn't heard about that. Might be worth a try, thanks.

i have the new remasters of both of these albums with slowed down and backwards versions of some of the pieces. pretty interesting.

Man I love the two Fripp & Eno discs (I haven't picked up the new one), though I have them both on the original CD releases. I originally heard these from The Essential Fripp & Eno which contains all of No Pussyfooting and half of Evening Star plus a long odd unreleased track that presages early techno. Not very good actually.

I hadn't heard that the new reissues had the slowed down and backwards tracks, tempted to check that out.

Yeah, I picked up that CD reissue a number of years back as well and was pissed that they left off "Index of Metals" and included those lousy new pieces.

the liner notes in the reissue of no pussyfooting say the reverse version was done because john peel played it for the first time on the BBC from a reel to reel that was stored tail out. so it played backward. Eno called up during the broadcast and told them but they didn't pay him any mind!

That sounds like a totally believable Peel story. Barely a week went by without the great man playing something at the wrong speed, or playing the B-side of something and announcing it as the A-side or a similar usually unintentional mishap. I learnt everything I know about radio from that great man. :)