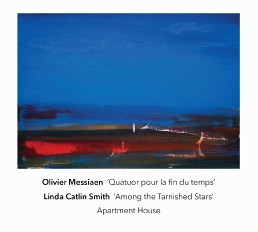 I came to Messiaen fairly late in my listening career. For a long time, his was a name, not much more. Somewhere in the early 80s, I picked up the Philips recording of the Quartet, probably due to the presence of Vera Beths on violin, whose name I knew from her involvement with a number of Willem Breuker projects (I was way into Breuker then; the Doré engraving on the cover didn't hurt, I'm sure). The name of the pianist on the date, Reinbert de Leeuw, meant nothing to me at the time! It had a strong effect on me, both the historical facts of its creation and, especially, the two louanges. Still, I filed it away and managed to, more or less, forget about it. Some years later, when Zorn included a cover of the 'Louange à l'Eternité de Jésus', I recall it took me a few moments to place the work; odd. In any case since then, I've listened to many a reading of it and more Messiaen besides, though I'm still far from any kind of thorough investigation.  I listened to a few more in recent weeks and bought an old copy of the Erato vinyl, an early 60s recording with Huguette Fernandez, Guy Deplus, Jacques Neilz and Marie-Madeleine Petit, but apart from some obvious differences in approach it's beyond my ears and my available time to sit and do a proper comparison, not that it's necessary. I discussed the work a bit with Keith Rowe and he pointed me to this very interesting critical exchange on BBC Sounds, which readers might enjoy.

But first things first. There are two works presented on this fine disc, each performed by members of Apartment House (Mira Benjamin, violin; Anton Lukoszevieze, cello; Heather Roche, clarinet; Philip Thomas, piano). Though it's not mentioned anywhere I could  find, including the text on the Another Timbre site, I take it for granted that, not only by virtue if the relatively unusual instrumentation but amore importantly considering its overall sound, that Linda Catlin Smith had the Messiaen at least partially in mind when she composed the extremely beautiful piece, 'Among the Tarnished Stars' (1998).  The initial section's poignancy seems to be an indirect allusion to the louanges, though perhaps a bit more grounded, less trusting in the likelihood of spiritual salvation. It shifts subtly throughout its 28 minutes, maintaining a somber quality. The piano hits chords evoking the striking of dull metal  as the clarinet intones a sorrowful hymn. Gentle glimmers appear via occasional upward lines, the strings and clarinet adopting a kind of breathing, sighing pattern in the still air. Another deep, evocative piece from Smith; I'm very happy this label has done yeoman's work in getting her music out into circulation.

As said above, comparisons with other recordings are beyond my pay grade, though this quartet approaches the work with a certain kind of rigor and lack of any tinge of sentimentality, partly expressed by the relative lack of vibrato. The line in the 'Vocalise' is taken a bit more slowly than I'm used to, less stridently. Lukoszevieze mentions thinking of the cello part in the first louange as a kind of blues and that comes through to these ears. Thomas does something on the last movement, a slight dampening of the second of the doubled chords played (via pedal manipulation, I take it) as a kind of "ghost chord", a faint echo, or maybe I'm  simply imputing that due to the extremely fine level of touch employed by Thomas. Whatever the case, I find this effect to be very moving and beautiful. At the end of things, I can only say that, for me, this reading of the Quartet fits in quite comfortably with past favorites, holds its own very well and, in fact, is better recorded than many, giving it a bit of an edge on that front. It's entirely worth hearing of you're a fan of the piece--mandatory, even.