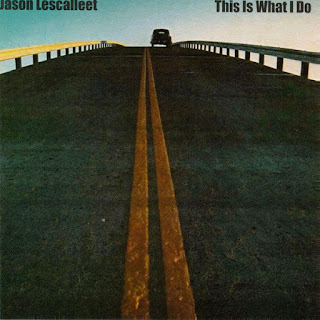 Jason Lescalleet - This Is What I Do, vol. 21 (Glistening Examples)

I first saw Lescalleet in the early oughts, on hands and knees, threading crumpled, loose audiotape between five or six ancient tape players. The resultant sound aside, there was something simply physically impressive about the sight. He's a big guy, a counterweight to the more typical weedy geek crouched behind an Apple. Something almost athletic was happening, something coiled and pent-up, ready to violently unfurl. The sound, of course, was great. Those dark, irregular rumbles, layers upon layers of them, repeating in very slow loops. I was never sure how much of the sound was from recordings inscribed on the tape, how much was due to their battered condition, the slack way they pulled through the tape heads--probably some of each.

Lescalleet moved on and I'd followed his work with reasonable closeness, enjoying the great majority of it, being confused now and again, charmed more often. I still think his 'The Pilgrim' is one of the most moving, important works of the first decade of this century. In 2011, he embarked on a project titled "This Is What I Do" which began by cataloguing earlier work and quickly became a kind of "workbook" to quickly document his current activities. I heard the first two of these, then lost track. A few months back, having reached Lescalleet during my anal playthrough of my music collection, I thought I'd make up for that shortcoming and went to his bandcamp page only to discover that he'd removed most of the twenty-one recordings in that series, figuring they'd served his purpose. By happy chance, I was up in the Portland, Maine area last month, met Jason for coffee and was given a copy of Vol. 21.

First of all, what a great cover. No  source or  photographer is provided but...excellent. Second, something I just noticed while writing: the graphics on the disc itself. Aside from the track listings (leaving out the first), there's what seems to be an entirely bogus set of...well, a list of countries in the form of a track list, though not all are countries (Africa Tabernacle Evangelism, Network, Chaplaincy Ministries) as well as credits containing a number of humorous misprints like "dublication" and  "Holy Bible: New International Venison".  Few of these yield much to googling. Lescalleet has a long-standing habit of encrypting obscure references into his work, either via titles or the music itself but he warned me not to go searching for such in this case, so I won't. Except. When I went to enter the release into my database at Discogs, I noticed the following track timings: 0:11, 11:11, 11:11, 11:11, 5:55, 11:11. I'm sure this is mere coincidence.

The 11-second track consists of some buzz and crackles followed by Lescalleet saying, "Nah, I don't like that." Gotta love it. "I Can Receive Music Alright" is marvelous, a kind of descendant of the Fenn O'Berg theme. After what sounds like some short-wave conversation, a lush, Holstian symphonic track enters, expansive and billowing. I feel like I know the piece but can't put my finger on it. There's something of a soundtrack quality to it and is the first reason I began to think of the disc as an audio film. Lescalleet has often used filmic references in the past and incorporated scenes from movies  in his live performances. This has an overture-like aspect, cloudy and surging, very attractive. He lets it go more or less on its own for several minutes before introducing low, nearly sub-sonic rumblings and explosions, the kind of element he handles as well as anyone around. These sounds, evoking large objects jostling around in vast,  echoing spaces like the hull of a tanker are extremely immersive and gripping. "Kiss Me" picks up in that same world of hollow banging and rattling, the sounds occurring more rapidly and with agitation. Suddenly, a deep male voice says, "Mademoiselle Julianne, embrassez moi". After more thick, dark noise, the same voice intones, "Il est mort, mademoiselle." and some more, a noirish tinge that picks up the cinematic theme, if there is one. That sense of thickness, by the way, is something I always associate with Lescalleet's work, a  density, a feeling of multiple, claylike layers.

Oh yes, there's also extremism. At the end of that cut, there's a sequence of some of most eardrum shredding sound I've encountered in recent years, though it feels oddly soft, like having your auricular canal reamed with dental floss. Beware.

'Thirty Percent Flat' is a whirlwind of electronics and natural sounds (crickets, tree frogs, who knows what else), its volume and density rising over its course like a lava flow, eventually boring another clean, heat-blasted hole wherein sounds can scour your skull. The "short" track, 'Korea 2002' also begins with a surge, then lapses into simple piano (or koto? the recording is blurry enough that it's hard to tell) and percussion (sticks), with a voice speaking briefly in, I think, Japanese, despite the piece's title. It's somewhere along here, or perhaps in the prior piece, that my movie notion kind of breaks down, quite possibly because it had no basis in reality to begin with. 'Korea 2002' is a fine, mysterious piece, though, its principal sounds slowly getting absorbed into vague electronics and/or room ambiance.

"Hello,  this is the Minneapolis Police. The party is over." So begins the final track, followed by a snarled "One, two, three, four!" and a dense segue into a dance track and extreme feedback, soon splaying out into a ringing, desolate landscape, industrial and nocturnal, Lynchian high tension wires. This goes on for quite a while before, for the piece's last 90 or so seconds, giving way to some utterly gorgeous piano music. Again, I'm at a loss as to the source but feel I should know it (and want to). As lovely and fitting as the Chopin played by George Dzundza in 'The Deer Hunter'.

A fine end to this movie and a great release. This one is still available at the Glistening Examples bandcamp site--do check it out.

I started with online dating a few years ago when wasn't so popular and I tried many different sites. Can't say that anastasia date review is the best site on the web but I also can't say I'm not satisfied with it. Ok, some girls look like they aren't real but every girl I talked to was nice and had great time talking with them. I'm still looking for my real love and won't give up. Hope AnastasiaDate will be the place where I'll find it.

Thank you for sharing this story! It is very interesting. You can write about it on your instagram profile. If you want to get more insta followers just use this site https://soclikes.com/buy-instagram-followers