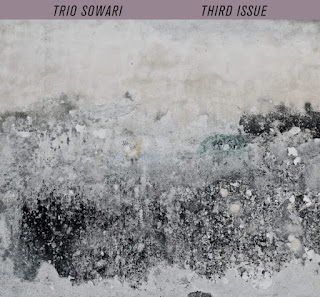 The title doesn't lie--this is the third release from this fine trio, the first since 2008. I'm not sure if the gap is intentional or not, but they sound as fine as ever. Phil Durrant (modular and software synthesizers), Bertrand Denzler (tenor saxophone) and Burkhard Beins (percussion and objects) carve out a very unique sound area in the world of free improvisation, one that's quite full and colorful while avoiding over-satiation.

The opener, "Gravitation" lurches right into things--heavy synth, deep, clucking tenor and a range of brushes and bangs hurtle the listener into an active sound-world, filled with movement but also with significant space between objects. Denzler has never shied away from the saxophone-ness of his tenor, managing the difficult feat of incorporating it into a free-improv context without toting much unnecessary and distracting jazz baggage. He tends to keep his tomes low (by no means always) and balances reedy passages with extended techniques. More importantly, in music like this where "quiet" isn't as much an issue as elsewhere, he chooses his moments expertly. As do the others. Beins has long been a master at this and his brilliance is clearly in evidence. Durrant might be more the wild card; his subtlety is such that the non-concentrating listener might bypass him entirely, though his sounds are often the true glue binding matters. "Suspension" is about the drone, beginning with a wonderful low tone (Durrant, I think), soon joined by Denzler approximating the tone, generating flutters of interference. Eventually, Beins adds some slow, regular cymbal taps that are as perfectly appropriate as they are unexpected. This is followed by a brief palate cleanser of sorts, "Exploration", a set of almost discontinuous attacks that nonetheless manages to cohere quite well. "Levitation", the closer, tries to bring these disparate approaches into a single 9-minute pieces, utilizing drones (here, bowed metal), fluctuating tenor, and higher pitched synthesized hums. There's great elasticity here, a stretching and warping of fabric, the cloth smooth here, gnarly there. Billowing waves emanate outwards, blanketing one's ears--an excellent end to another fine, fine release from this under-recorded trio. 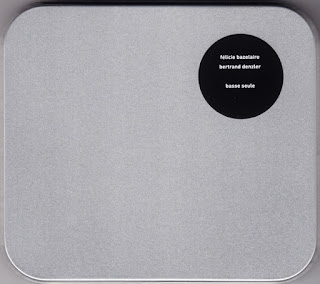 What an amazing, impressive surprise.

While living in Paris, I was able to see Denzler a number of times in various contexts, always a joy. I was also able to hear and see Bazelaire on several occasions--I'd never heard of her before--and each time came away very impressed. Denzler's set of pieces for solo bass, with Bazelaire at the helm, is extraordinary.

There are nine tracks, seven of them "études" (numbered 7, 9, 10, 11, 14, 3 and 17) plus two works titles "3D4" and "3D1". The first five are all played arco and all occupy the nether depths of the bass. I'm not quite sure if the technical term is correct, but I'm thinking "wolf tones". Whatever, the sound is amazing. Even as the territory covered is similar, there's an enormous amount of variation and sheer gorgeousness in the sonorities. Long, low growls, endlessly rich and complex; I could wallow here forever. If you were knocked out, live or on recording, by Charles Curtis performing Éliane Radigue's 'Naldjorlak I', you need to hear this. The approach is severe, the results anything but. Be warned: your speakers may vibrate off their stands. The sixth track, 'étude 3', is pizzicato, but remains low, Bazelaire slowly, intently, strumming the depths; patient and lovely. Arco returns on the two non-étude works, but the structure and range of the bass is different. The lines are shorter, more overtly rhythmic, and the pitch range is greater, resulting in works that are perhaps more in the ballpark of solo music one may have heard in modern conservatories over recent decades, but with a roughness and rigor that remains rare. "3D1" and 'étude 17' depart even more from the previous pieces, both in the amount of open space and in the higher pitches negotiated (arco). The final work wanders into a dreamy and fine area, an almost sing-songy back and forth, very plaintive and, again, not without grit and grain.