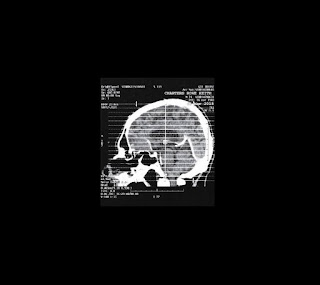 I first noticed the tremor in Keith's right hand on a visit to his home in Vallet in the summer of 2014. Presumably it had existed for some time although while I was in Paris (from February 2013) we saw Keith several times a year and I hadn't picked up anything before. When I returned to Vallet in November for two concerts in honor of Christian Wolff's 80th birthday, Wolff at one point asked him directly about the shaking and Keith replied that they were having examinations but it might well be Parkinson's which, in fact, it turned out to be. 'The Room Extended' was begun in 2013 and completed in 2016. Death had always been on his mind, often talked about very matter-of-factly, but, as clearly indicated by the cover image of his brain (a pre-Parkinson's diagnosis scan for a possible tumor), one assumes a permeation of this concern over most of the course of the construction of the present work.

As in 2007's 'The Room' (ErstSolo 001), this was put together at home, composed if you will, though the multitude of components themselves are largely improvised. One of the first things that hits you is the immense depth of much of the work; there always seems to be at least four or five layers of sound occurring, enough that on each subsequent listen (I've been through its four-plus hours five times so far), you pick up not only sounds you've not heard/noticed before but, more rewardingly, new relationships between them, both simultaneous ones and ones spanning the course of the piece. For a while, Rowe has been interested in revisiting sound areas he's investigated over the years, seeing if there might be aspects he'd previously missed or investigating new ways of deploying them and at several moments here, listeners familiar with his history may well recognize some signature sounds. There are plenty of new, even startling ones as well, such as the artificial sounding bird call that's looped for an almost unconscionable length at one point. More tellingly, the habit he first (as far as I know) used in his solo performance in Tokyo in 2008, that of the intentional inclusion of extracts from Western classical music, is a thread that winds through the entirety of 'The Room Extended'. In at least one sense, it's simply an honest evocation of his room, the main room of his home in Vallet, in which any visitor will hear over his stereo, not the latest release from the contemporary improvising world, but rather Wagner, Haydn, Brahms, Purcell, Mondonville and others. This is, in a circumscribed sense, his room. So certain themes that have preoccupied him in recent years--Wagner's 'Tristan und Isolde' or the death scene from Purcell's 'Dido and Aeneas', for instance--make their presence known quite strongly. It's an odd mix, I think, for those of us who know his work, on his own, with AMM or in collaboration with countless others. There's a difference between a random radio grab and an explicit implanting of material, one that I've struggled with but am coming around to. For Rowe, in addition to simply having a great appreciation for their beauty and probity, it's an overt acknowledgement of the tradition from which he arises.

Of course, Rowe's notion of The Room encompasses much more than the Western classical tradition and here one gradually encounters more from the East, including what seems to be Indian and Egyptian musics via the radio (the latter sounding like Mohamed Abdel Wahab, though that's a guess). But more than id'ing this or that source, the power in 'The Room Extended' derives from the way these and the far more prevalent electronic and guitar sounds (there are surprisingly many very recognizable instances of the latter) are filtered, layered and paced over its 246 minutes, the fact that, to these ears, intense interest is consistently maintained. Apart from 'The Room', Rowe's historic involvement with anything remotely compositional has been very limited, essentially confined to graphic scores (Cardew, Wolff, Brown, his own work like 'Pollock'), so you wonder how things might have evolved differently had he been working more often in this milieu, where things are carefully considered over a long period of time. Once when we visited, he played us a portion of music that he was considering using for 'The Room Extended', a thick sandwich of string sections from six or seven sources, layered atop one another. Sounded amazing and I think you hear a snatch of it (or something like it) at a couple of points, including toward the end of the present work. But more, the overall feeling I get from the piece is one man, sitting at his work space in his small loft in the converted cellier in Vallet, letting all the sounds, remembered and ongoing, filter in, mixing with his knowledge of what's occurring in the world (one is tempted to read an uncritical demographic observation in the increasing presence of Islamic music as the piece develops) and, always, with the acknowledgement of the certainty of death. His upcoming recording with Michael Pisaro deals with the Venerable Bede's analogy of life: a sparrow flying into a mead hall where a raucous feast is taking place and quickly flying out a window on the opposite side. Here, amidst a whirlpool of sound, from radios, news commentaries, orchestras, guitars and electronics, at the very last, an alarmed voice speaking in Spanish is abruptly cut off. Then nothing.

Nice. Does this mean we're going to see a year list ?

Yeah, probably. Although I necessarily heard far less new music this past year than in previous ones. But a lotta excellent work.

Thanks so much for writing this. I hope you are able to continue posting here occasionally as I gain so much from reading your reflections. I'm glad you talked in particular about his growing interest in incorporating classical music in his work. I well recall a set he did in NY, possibly in 2011 but perhaps earlier, when he ended the performance with a classical piece. In fact, the performance didn't end, because he simply left the radio playing the music and walked away. Everybody got up and started moving about as if the performance was finished, but I stayed glued to my seat, listening to the music as it continued to interact with the environment. Keith is an amazing artist and I really look forward to his next project.

the set I remember where he did that in NYC was a duo with Julien Ottavi at ErstQuake 2, the final set of the night and both of them left the radio playing as they left, I don't remember him doing that in a solo set but it's certainly possible.

Yeah, you are right, it is earlier than I remembered. I was sitting right next to Keith during that performance and at the end, he said to Julien, regarding the music, "Just leave it on." And then they both got up and walked away. One of my very favorite sets that I can recall.