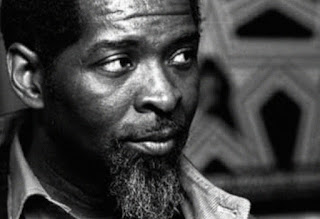 Just a few thoughts on Muhal Richard Abrams as I wend my way through my recordings.

I think the first time I heard him was as a guest artist on the wonderful Art Ensemble recording, "Fanfare for the Warriors" (recorded in 1973, released in 1974), though I'd seen references to him before. At that point only his first two records, "Levels and Degrees of Light" and "Young at Heart, Wise in Time" had been released and Delmark records were a bit tough to come by in Poughkeepsie. He stood out a good bit on that Art Ensemble session and perhaps even more on Marion Brown's beautiful "Sweet Earth Flying", which may still contain my favorite recorded example of his playing, his solo feature on "Part 5".

I saw him once prior to moving to NYC, as part of the incredible Braxton quintet I had the great fortune to see at the Tin Palace in the summer of 1976, with George Lewis, Fred Hopkins and Steve McCall (still my single favorite Braxton group, possibly a one-time only performance?) and may have heard "Sightsong", his wonderful duo with Malachi Favors, by then but I certainly saw him often once I was ensconced in New York. I can only recall one occasion when he played Environ (a solo concert), though I may well be forgetting something. He did often come around to concerts though and once in a while would simply hang out in the space. In a few such instances, I had the enormous good fortune to engage in several conversations with Muhal, events I cherish. He was always gracious but also very forthright in his opinions, including subjects such as white musicians playing jazz. "I could go to Ireland," he once said, "and study the Irish jig. I could stay there for twenty years and, eventually, become a really good Irish jig dancer. But I'd never be as good as an Irishman." I saw him perform elsewhere quite often in various other capacities as leader and sideman, including some AACM-organized events at the Center for Ethical Culture. It was always a joy to encounter him at such shows, whether he was on stage or in the audience. The respect accorded him by any musician in the house was always evident. You also got the strong impression of a real family guy, his wife and daughter often accompanying him and/or involved in the concert organization.

As with the great majority of musicians in this music, my taste runs strongly to his earlier work. Those first two Delmark recordings are wonderful as is much of the music on the rather grab bag "Things to Come from Those Now Gone", especially "March of the Transients", one of my favorite AACM-involved pieces ever (https://www.youtube.com/watch?v=D5anhyZDJTg). "Afrisong", a solo recording originally issued on India Navigation (also on Why Not?, I think) is lush and beguiling and the aforementioned "Sightsong" is a long-time favorite, not the least for the incredible Favors solo, "Way Way Way Down Yonder". A few other duo releases have their merits as well, including the Arista session with Braxton (Duets 1976), "Duet" with Amina Claudine Myers (Black Saint, 1981) and the lesser known "Roots of Blue" with Cecil McBee (I believe the only record ever issued under Abrams' own label, RPR, in 1986). On the other hand, "Lifelong Ambitions", where he's paired with Leroy Jenkins, rarely gels. I'd also mention another great participatory work, issued under Roscoe Mitchell's name, "The Roscoe Mitchell Quartet" (Sackville, 1975).

Abrams seemed to have a kind of split personality with regard to musical "camps". On the one hand there was work like most of the above mentioned, steeped in jazz and blues, extended outward; for me, this is decidedly his strength. On the other, there was a tendency toward drier, more academic music, more "European" if you will, ironic in light of that statement on Irish culture. It's an interest shared with Mitchell, Braxton and Lewis among others and, I've no doubt, would be defended by them on various grounds among which would be the contention that any charge of academicism would be an over-simplification of the reality and I'm sure that's true to one extent or the other. Nonetheless, at day's end, that's the impression I'm left with. Beginning in the late 70s, Abrams released a number of albums (first on Arita Novus, then predominantly on Black Saint), often involving large ensembles, which fell into an oddly predictable pattern: several abstract pieces, "third stream", if you will and one bluesy/jazzy composition. Inevitably, I'd find the latter quite enjoyable, the former less so. I doggedly followed along for a good while, however, I think up until "One Line, Two Views" (New World, 1995) at which point I gave up. So I may well have missed some fine music subsequently.

Muhal is 85 years old now and I hope he sticks around for a good long time. It will be a sad, sad day when he passes. Via his music and his fundamental involvement in the formation of the AACM, he is, to my mind, one of the most important musicians of the 20th century, really still too little recognized. Thanks for all the beautiful music, Mr. Abrams.