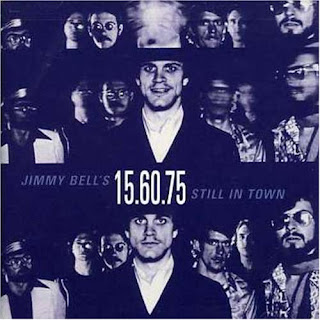 I've told this story before but what the hell.

Some five years ago I went to see the Golden Palominos at Poisson Rouge in NYC (the only time I've been to the place, in fact). I hadn't listened to them in quite a while--I don't think they'd had any releases out since Dead Inside from 1996, a very underrated disc, imho, btw--and wasn't really expecting much but I'd been something of a fan since their first self-titled record from 1983 which I imagine I picked up because of the presence of Laswell, Zorn and, to be sure, an acquaintance of mine from Vassar, Roger Trilling (who went on to do some work with the Enemy label and also Herbie Hancock). Anyway, I enjoyed it quite a bit at the time (still do) but more surprising was how much I liked the follow-up, "Visions of Excess", given its explicitly rock-like atmosphere, which I had little time for then, more so with regard to Fier's drumming, the kind of pounding I'm normally not very fond of (I think the record was dedicated to John Bonham) but, you know, exception proves the rule and I really had no problem with his work. More, the record was really solid, ranging from fairly approachable pieces to more severe ones like 'Only One Party' and 'The Animal Speaks', the latter penned by one Robert Kidney about whom I knew nothing and, indeed, assumed to be a pseudonym.

Despite the horribleness of the next record, "Blast of Silence", I stuck with the Goldens. There'd occasionally be a semi-decent release (as said, I think there's a lot of good material on "Dead Inside", almost entirely courtesy Nicole Blackman) but by and large, I wasn't all that interested. Still, though the idea of a reunion concert piqued my interest somewhat, I likely wouldn't have attended were it not for the presence of the wonderful Wingdale Community Singers also on the bill, who were fantastic (thanks, Nina, David, Rick!)

So, my friend and I went to the venue, not my favorite kind of place to hear music and, luckily, poached two of the very few chairs at a tiny table to the right of the stage. At a point during one of the early sets, we noticed a stout, elderly gentleman standing, propped by a cane, near the side of the stage. He looked a bit shaky and my friend was about to offer him her seat when someone closer to him did so and we thought nothing further of it. The Palominos came on, the first five or six songs (iirc) featuring Syd Straw and the music was rather pedestrian, kinda what I expected, chugging along well enough but having no real reason for being there. Then, much to our surprise, we saw that stocky gentleman making his way, hesitantly, up the stairs to the stage where, once ensconced behind the mic, he strapped on a guitar. I think they broke into "The Animal Speaks". Well, it was Kidney, jowls flapping furiously, bellowing and roaring. "Force of nature" is an overused term, but he came pretty close. He did three or four pieces, I think, tearing through them all though, I have to say, the one available on You Tube doesn't quite capture the moment. Maybe my memory is faulty...

So I went home, did some research and soon picked up this recording, recorded live in 1975. And liked it bigly. Listening to it now, it still sounds pretty excellent. For me, they managed to retain the improvisatory nature of the better rock bands of the 60s (one key: Dave Robinson's non-clunky, supple drumming) while adding blunt, dark post-Velvets words (more about the nature of the delivery, perhaps, than the lyrical content). "Animal Speaks" here also incorporates some juicy soul-based horn lines; it's not as savage as the Palominos version, where John Lydon was the vocalist/burper, but chugs along sublimely. And, wonderfully considering this is a live gig, there's no let-up whatsoever as they transition into "About the Eye Game". Indeed, it sounds like an extension of the previous piece, amped up a notch or two. "Narrow Road" is almost as intense, with more of a shuffle feel, also introducing congas and harmonica to great effect. Not so punk in the sense of not eschewing solos; I sometimes think of a bluesier Velvets. The liner notes are by David Thomas and there *is* some adjacency to Pere Ubu but, maybe, a block or two over in the same grimy area of Cleveland. He cites Beefheart and Sun Ra, fair enough. I weirdly pick up vagrant Art Ensemble vibes don't ask me where, maybe the conga and saxophones, something vaguely Bap-Tizum-y going on. The centerpiece is still "Jimmy Bell", a slightly more relaxed, expansive lope with that simple, inevitable descending, five note theme, and the unspooling guitar work it allows. The constant repetition and intensification..."look at the sisters in the corner, look at the sisters in the corner..." all spat out by Kidney, the saxophones allowed free reign, not confined to rockish bursts, the rhythm unrelenting, the warped harmonics of the guitar. It's probably one of my favorite rock performances ever, if you can call it that.

I'm always surprised I don't hear 15 60 75 (often referred to as The Numbers Band) name-checked more often. Weird. On the other hand, I've never gone out and picked up any of their subsequent recordings figuring, perhaps wrongly, that they'd fail to live up to this one. Live videos I've seen from recent years are ok but not terribly inspiring. Recommendations are welcome.