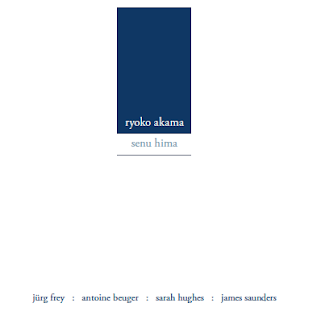 Akama has quietly become a very strong presence on what one might call the post-Wandelweiser scene, both with regard to her own music and her hand in the excellent Reductive Journal publication. Here, she takes on the role of interpreter, having requested scores from four composers, two of the senior members of the Wandelweiser collective (Jürg Frey and Antoine Beuger) and two of the most interesting members of a younger generation that draws from, among many others, that tradition, Sarah Hughes and James Saunders. As it happens, the works sent by Frey and Beuger date from 1994/97 and 1996 respectively while the other two are from within the past year or two.

I couldn't locate any scores for either the Frey or Beuger piece though I came across a citation of the former, titled, "Die Meisten Sachen macht man selten" (which Google translates--incorrectly or non-idiomatically?--as "Most of the stuff that makes you rarely"), which indicates that it was written for percussion. Akama substitutes single vocalized syllables and individually played piano notes and sine tones. Whatever the original score proposed, it's a beautiful choice. The sounds appear singly, the vocal spoken calmly but not whispered ("mo", "kuh", "hoh", "shi", etc.--I take it they derive from Japanese), the pacing almost but not quite rhythmically regular. I don't think any "type" of sound appears more than three times in succession and the variation follows no pattern that I can detect, injecting a certain amount of unanticipatedness mixed with security as one listens. Keeping in tune with much of the essential nature of Frey's work, Akama allows for an amount of basic melodicis--through the piano to be sure but also in the qualities she chooses to include in the sines and in her spoken voice. Static on the one hand but patiently, steadily forward moving, it creates a wonderful impression of walking through a space, sensually alert, not stopping but stepping slowly enough to be very aware of your surroundings as you pass through. An excellent piece.

Interestingly, as Sarah Hughes' "I Love This City and its Outlying Lands (1.2)" begins, you hear wooly static for a moment but quickly, the "same" piano as had been heard in the Frey. But here, it's the first note of a simple, three note rising figure and is a more or less consistent presence throughout the piece's 27 minutes, though wavering a little now and then, sometimes as though "seen" through thick, partially opaqued glass so as to possess some amount of uncertainty, its "melody" evoking a plaintive quality. At first there's also a low, thick hum maintained, it too varying in intensity as well as some just audible rustling of a metallic nature. With only these few elements (and a handful more that occur as the work unfurls) a fine sensation of vastness emerges, hazily lit, the melody seeking a path through. The rustling gets closer, other sounds--a guitar string plucked, a thunder-sheet sound, a fairly harsh, metallic screech like a rod drawn across a rusted surface appear--the latter darkening the ambiance significantly, abetted by a louder and low grainy throb. A steady, thick clicking sound that begins late in the piece does its part to help establish a sense of foreboding as well. A great balance of spareness and implied density and a super-impressive work and realization--wonderful music.

Beuger's "touw (voor joop)" might be the most radical piece presented here. I'm guessing that the sound source is left up to the player and Akama narrows her range all the way down to an individual "blip", a kind of partially muffled tone with a sharp center, an electric spark clothed in thick lint. In the first section the pitch remains the same (I think) and the tempo is almost regular, not quite. There's a pause and, while the pacing stays approximately the same, the pitches vary somewhat. If you can think of a 60s sci-fi film idea of the sounds a computer would make and then slow that down drastically, you might get the idea. The sections continue, the silences between lengthening. It's quite difficult, perhaps a little bit on the cold side. I'm wondering how it would sound using an acoustic instrument. Here, the rigor combined with the relatively clean and sterile sound source makes it tough to work one's way in.

The alternation between the sparser and the denser continues with James Saunders' "overlay (with transience)", in pure sound range the richest work here. Akama brings forward multiple layers of very different electronic sounds ranging from bell-like to washes of static to ringing hums and more, weaving them through each other without any obvious overall system but not simply sounding like a drone stew either. Why this last is the case is, for me, hard to pinpoint. The music flows rather smoothly, the sounds tend toward the consonant, though speckled with the occasional harsh, electric spark. But you receive some sense of structure hidden somewhere beneath the quavering stream--I'd love to see the score. It's a marvelous work, mysterious and engrossing, somehow sidestepping much music that one might think of as superficially similar; there's something special going on here, some at least idiosyncratic if not unique approach to sound and structure.

"senu hima" is an outstanding release. If you're not as yet aware of Akama's work, this, along with her previous recording, "Code of Silence", is an excellent place to start.

Roughly: "Most things we rarely do."