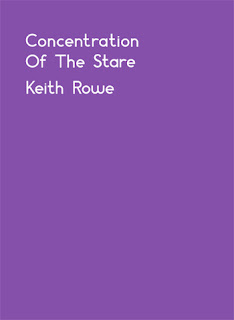 Spend any amount of time in the company of Keith Rowe and the names of certain painters will arise in conversation with some frequency. Caravaggio, Twombly and, among others, most definitely, Mark Rothko. Just as, long ago, he'd imagined what the guitars in Braque's cubist painting might actually sound like, so, I think, he did with Rothko, often referring to the way the "tinged" the space in which they were hung. For some time, in the early oughts, Rowe tried to place his music in a similar area, where it more tinged the aural scape rather than imposed itself on it ("Duos for Doris", with John Tilbury, might be one of the finer examples of this approach).

Needless to say, when he at last had the opportunity to actually perform in Rothko Chapel in Houston Texas in 2007, it was a weighty event for him. And, when in fact confronted with the fourteen extraordinary panels there, one gets the impression he felt the need to perhaps "balance" his sound with the artworks to a more forceful degree than he may have done in their absence. The 40 minute set, generally speaking, refers back two or three years to the rich, steady-state solo work from the first few years of the decade. More so than most recordings, a great deal is necessarily lost here--the pure physicality of Rowe in the midst of the Rothkos, communing with them, the immediate resonance an observer would doubtless register between sound and canvas; one simply must imagine the totality of the event. (I have to say that such imaginings aren't helped by the cover of this release, a flat, boring purple that has nothing to do with the rich violet-blacks of the paintings in the room.)

As is, it's a fine addition, the sound stream made of of rough, thorny elements spun together into strands that lessen the harshness--think burlap. As is always the case, it seems that there are four or five levels operating at any given moment and one's concentration easily hops from one to the other, never losing track of the whole. It builds to a mini-crescendo about 25 minutes in, then to a still more intense level five minutes later before subsiding back into the room. Those familiar with Rowe's work over the last 12 + years will recognize the territory covered, an expanse far more immediately accessible than, say, "The Room". Again, what's obviously missing is the presence of this room but it's not all that difficult to transport oneself there, making one's own connections between the clouds of electronics, filled with endless details and the infinitely deep spaces within the Rothkos.

Be a nice idea if the Chapel would install this as an occasional element perhaps....

A beautiful set and, of course, an obligatory get.

I'll be heading off the Block Island for two weeks tomorrow so, unless I decide to post something from there, see you in mid-August.
Posted by Brian Olewnick at 7/30/2011 08:14:00 AM

The label owner told me that the printer messed up the sleeve design and it came out, unfortunately a completely different violet shade.