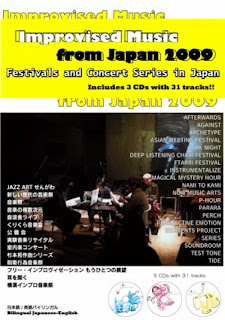 The magazine is comprised largely of interviews with persons involved with maintaining and booking performance spaces in Japan; their thoughts and opinions are likely of more interest to residents there or perhaps others in the field. The one exception is a very interesting self-interview by Taku Sugimoto that's well worth a read by admirers. This issue comes with three discs worth of music as well, 31 tracks, almost entirely from people with which this writer is unfamiliar. Needless to say, it's an uneven uneven collection, but piece's that stood out for me included: Katsura Mouri's brutal opening track of repeated tapes and noise; Takahiro Hirama's delicate, incessant series of six rising piano notes (realized via computer)--obsessive and precise; Hiroyuki Ura's very delicate two minutes of almost nothing; Koji Saito's (similar to Hirama) four-note, repeated guitar phrase, perhaps sublimating early Sugimoto--lovely; Makoto Oshiro's mysterious and evocative combination of piezo mike, feedback and wind, a wonderful piece, my favorite from this collection; and the concluding piano song by Saya is disarmingly simple and moving.

I received two cassettes from entr'acte. But I have no means of playing them, my last cassette player having long since bit the dust (never too keen on the things anyway). So Allon was kind enough to send mp3 files my way.

Steven Hess' "System Failure" comprises two brief pieces using iterative layers of static and other clickery. There's always a pulse in play, virtually a rhythm, though quite a mechanical one (though the second piece eerily--and I presume unintentionally--recall the loping meter of that classic one-time wonder Norman Greenbaum's "Spirit in the Sky"!). They morph somewhat, the outer layers shredding a bit, but at core they're similar throughout and, for myself, they cast a pall, lessen the interest in the fuzzier, more amorphous sounds.

The second cassette is a compilation of five persons/groups, none of whom I'd encountered previously, I believe compiled by DJ Ordeal. Deepkiss 720 seems to be squawling sax in the Zorn tradition with motor-like electronics--noisy, that is to say. Think Brotzmann pere et fils on meth. DJ Ordeal conjures up an avian scene with a distant wooden knocking and closer, though muffled, conversation; pleasantly immersive. I always thought it was Van Vliet who came up with the not so deep line, "The stars are matter; we're matter; but it doesn't matter." In any case, that's what The Spartacus Stargazer begins its track, with the female (?) vocalist muttering those words before the band launches into a beat-noirish piece; not quite sure of the point.

Side two commences with The Tarbox Tentacle. I feel I should stop there. The Tarbox Tentacle...love it (its sole google hit refers to this cassette). Well, the song, "Honey Boy", has casually tossed off lyrics, ambient sound, goofy percussion and beats and more. It's rather fun. Finally, The Vitamin B12 offers a bit of the "Raw Deal", sort of circling back to the beginning, spitfire sax offset with electronics, out of a free jazz bag for all its noise surface. Scattered... 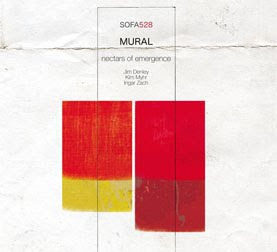 Jim Denley (alto sax, flutes), Kim Myhr (guitars, preparations), Ingar Zach (gran cassa, percussion) [yes, I had to look it up--a bass drum]. This is a fairly delicate, mellifluous set, the trio tending toward soft, tonal whistles (Denley), gently plucked guitar and a wide range of colors from Zach, leaning toward the bowed or quietly struck. In fact, with Denley's flute often evoking shakuhachi, there's a decided East Asian cast to the session. The result is a kind of pleasant stasis, with modicums of drama now and then, but overall a sense of brooding serenity. I wanted to hear a bit more grit, more of the world outside this isolated garden, but Mural does achieve an involving, kind of floating equilibrium that has its attractions.

hey brian where did you get the Mural disc from? I can't find it on disc from Sofa distributors...

Hey Billy, Ingar sent it my way. Maybe mail him at: info@ingarzach.com

i am new to your blog (as of last week) but have been reading back and enjoying it immensely; thanks. i'm learning of so many releases that i've missed over the years.

i'm curious to know more about your listening environment(s). how and where do you listen to most of the recordings you review? on what type of system? headphones? etc. etc. etc. if you have a moment to indulge me with an answer, i'd surely appreciate it. or if you've discussed this at some point in the blog, just point me to the entry.

Hi Ryan, thanks for the kind words.

Nothing too fancy. I'm lucky enough to have a room for myself in which to listen. I've never been a big audiophile but I'm told by people with ears so attuned that my system sounds pretty good. NAD L40 amp and BEE515 disc player with Vienna Acoustic "Haydn" speakers.

I've never liked headphones and don't currently own a pair.

On rare occasions, like the entr'acte discs, I'll listen over my PC (Harmon Karden speakers) though of course, I'm not quick to really judge things via that route. I don't download very much at all but listen to streaming audio once in a while.

Thanks for the review Brian. Just a quick correction... it's Steven, not Stephen.
All the best.

For me this is perfect cd!
Cheers!

Do you have some Jpop greatest hits collection, I love all these harayuku girls who sings in these bands