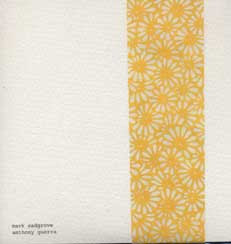 Two guitars with electronics and some very soft vocals. I don't know Sadgrove's previous work, but this fits in nicely with what I've heard from Guerra in the last few years. Quite languid, tonal strumming with a frothy series of drones beneath, sometimes recalling tamburas, very pretty in a hazy way. Does part of me want to hear more bite? Sure. Would I like more uncertainty as to what direction the music will take as it unfurls. Yep. But there's something so restful about it and it's just prickly enough that I simply loll.

Three pieces, which I hear as something of a suite (though there's no indication of such), lasting about 20, 20 and 10 minutes. I picked up a kind of "Bohor" vibe here, a very attractive one, though in a narrative kind of way, doubtless unintended by Grzinich. I always imagined the great Xenakis work as a massive mechanical process, perhaps a huge burr boring (burr-boring-bohor, you see) into the earth. In the first track of Grzinich's set, "dispersion trajectory", it's as though we're looking back in on the Bohor sinkhole centuries later, the tunnel having acquired a hollower tone (a wonderful one), its roughness not quite as rocky as before but still capable of throwing up the odd gnar or knot of metallic shavings. There's a underlying swell here, though one that possesses a grinding aspect that funnels back an amount of scree as it proceeds. The second, "membrane formation", seems to revisit the site a few decades hence; the detritus is still encountered, though it's taken on the tones of metal casings playing in the wind against the side of a boat, but the hum has become smoothed a bit, maybe the tunnel has been tiled. The final visit, "spectral remnants", is millennia hence, the tunnel having been thoroughly scoured, the solar wind whistling through, only echoes of its former granularity remaining.

....I like music that summons forth images like this! :-) Fine work, recommended for those who enjoy Olivia Block, among others.