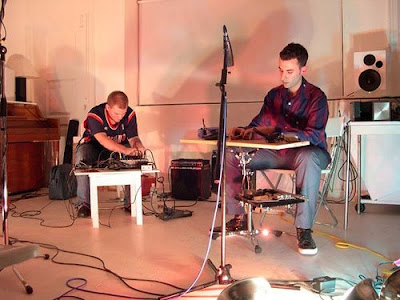 
Went to Listen Space in Williamsburg on Saturday, a nice, new-looking white room, for three sets of music. First up, Tucker Dulin (trombone) & Barry Weisblat (electronics). I'm partial to Barry's science experiment approach; it rarely gets too dry for me. His manipulation of small fluorescent tubes and (I'm guessing), their barely controllable reaction with the surrounding devices is fascinating on its own, for me. Whether it integrates with a musical cohort can be another matter and here, Dulin's trombone playing didn't do anything for me, a routine selection of extended techniques, often drone-oriented. Overall, not so satisfying except to the extent I concentrated on Barry's activity.

Dave Barnes and Richard Kamerman up next, the most enjoyable, engaging and thoughtful set of the night. Very difficult (for me) to really grasp while in progress, all to their credit. Kamerman takes the interesting tack of powering his equipment via small batteries and, indeed, makes the act of hooking them to his devices part of the performance. One of the things I most enjoyed was his habit of being matter-of-fact in the transparency of what he was doing. When he placed a metal plate on the board he used as a table, intended as a resonating surface for subsequent activity, the thwack of its placement was just as much a part of the sound. Taking more than a cue or two from Taku Unami, he placed one end of a metal rod on a vibrating engine (?) allowing the opposite end to caper over the board or metal, buzzing about under varying degrees of control. Vibrating surfaces of one kind or another made up the bulk of his goings on and provided something of a visual focus, enough so that Barnes' equally interesting noises, generated from a small mixing board, were too easy to lose track of; better to appreciate with eyes closed, probably. Either way, the music was spare and uncompromising, building "meaning" as it progressed, so when they stopped, I oddly had more understanding of the set as an entity than I had while it was occurring, a rare enough experience and a happy one. Good stuff.

Last up was the trio of Mike Bullock (bass, electronics), Jonathan Zorn (computer) and Bonnie Jones (open circuit electronics). I like Bullock's work that I've heard recently; he's a fine listener and an imaginative player. I enjoy Bonnie's work that I've heard, in its unusual combination of subtlety and rawness. But both of them were cast into somewhat hopeless roles due to Zorn's playing. He was apparently using a program called "supercollider" but whatever, there was no excuse for the kind of banal, ray-gun, bloopy sounds it emitted more often than not, making it all but impossible to listen to Bullock and Jones (which I nonetheless attempted to do). Really baffling, the level of insensitivity at play. Several times, they coalesced into very attractive zones, including the last several minutes, only to have Zorn inject some silly sound. (And no, I didn't get the impression that there was some kind of John White inference). Frustrating.

I like Bullock and Jones quite a lot...a duo between them would have been an interesting thing..

Thanks for the report Brian. Is that photo of Kamerman / Barnes? If so it looks like Mr Quam has had one hell of a haircut!

Shame to hear about the Jones / Bullock / Zorn set. I have a really great demo of Bonnie with Andrea Neumann here that is amongst the very best things I've heard all year. Certainly one of the most interesting musicians over your side of the pond right now.

That's them, all right.

My exposure to Jones' music has been too scant to say for certain, but I had the sense she was trying to draw things down a bit--her contributions were largely very quiet rubbing sounds, drawing some kind of stylus across the circuit boards producing soft moans and Bullock often conversed in kind, but.....they were overwhelmed.

yeah, Bonnie didn't have a chance, it was alternately sad, funny and pretty irritating.

the Bonnie/Andrea recording is certainly promising, but I think they can do decidedly better. luckily they've got some upcoming plans to record more together, looking forward to hearing how those turn out.

hi brian - great blog, also enjoy your writing on bagatellen. wanted to let you know about a John Berndt electro-acoustic composition record that we are putting out this November. This collects John's compositions from the past 7 years and is pretty wild. If you are interested in hearing it and possibly writing about it, I could send you a copy or direct you to an audio download. www.sortofrecords.com www.abstractonblack.com

Sorry to take up space on the blog comments. But wanted to say thanks for writing - always enjoyable reads!

Yes Jon I am looking forward to hearing what Bonnie and Andrea produce next. The short recording is excellent though as it is.

Hi David, thanks for the kind words. Looks like it could be an interesting disc (I see our old friend MAP did the liners). As long as it's understood that "reviews" these days means the paragraph I post here, I'd be happy to hear it.

"The short recording is excellent though as it is."

sure, it's fine, but too many combos settle for just putting out their first effort (and labels are happy to agree to this) and end up never pushing it farther. the nmperign/Gunter Muller trio is one I recall specifically. they put out their first trio recording on Rossbin (and it didn't even fill the disc, they had to add solo and duo recordings), then their second time together in the AMPLIFY 2003 festival was decidedly better.

and yes, it's probably one of the better things done this year, but that speaks more to the overall sad state of what's come out than anything else.