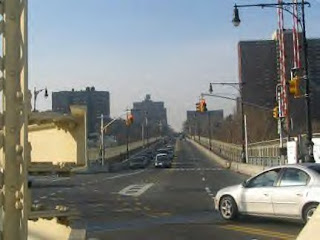 Drove up to Poughkeepsie yesterday to see the folks and my brother Glen and his wife Arlo. Blasting Ligeti in both directions (very wide range of music in that set, requiring much more digestion). Conveniently for me, the annual Sean Meehan/Tamio Shiraishi outdoor event was taking place in upper Manhattan, at the intersection of 155th St. and Macombs Place at 8PM, which was near enough to my return route to make stopping by a no-brainer.

The site is on the east side of the island, looking out on the Macombs Dam Bridge, a frilly structure painted off-white and lit at night, and across the Harlem River, Yankee Stadium. It's pretty close to the site of the old Polo Grounds as well. There had been a late afternoon game and, as I pulled in, numerous fans in Yankee t-shirts were streaming by, elated by a Clemens-driven win. I serendipitously located a parking space, got out and surveyed the surroundings. It was about 7:45 but I didn't immediately see anyone who resembled a likely audience member for the event. A few minutes later a car service vehicle pulled up and disgorged a couple peering intently at a white sheet of paper and looking around quizzically. I ventured to ask if they were trying to find Sean's show and they were. Turned out to be Geoff Dugan and his companion (whose name I've stupidly forgotten). Geoff most recently was in the news for the release of his recording of orchestral tune-ups, "Favorite Intermissions". Shortly, others arrived, maybe 25 in all, including Shiraishi, but no Sean.

There was an Italian restaurant and attached bar near the corner, an odd place for such an establishment, and I met Chris Wolf there, had a drink. Meanwhile, Shiraishi had set up at the base of an old, stone staircase that led from the bridge level down to the street and which served as seating for the audience and had begun playing. His style has remained the same since I last saw him at Tonic, all ultra-high, keening tones on alto, something guaranteed to draw the interest and scorn of passing motorists and pedestrians. Every so often, I thought I detected other non-traffic sounds being emitted from somewhere above and then, about ten minutes into the performance, caught sight of Sean walking barefoot around the upper level, about 40 feet above Shiraishi, snare in hand, occasionally sitting down and exciting it. Soon he ambled down the staircase to sit and play at various points about 10 to 100 feet distant from his cohort.

Around this time, I got antsy myself at sitting in one place. It just doesn't seem appropriate to me to do so for one of Sean's concerts if one has the possibility of moving around. So I went back up the staircase and walked in the area Sean had occupied previously, sometimes paying close attention to the music, sometimes turning my back on it and listening to the traffic, watching the bridge and Stadium. Shiraishi's alto doesn't lend itself to environmental integration nearly as easily as Meehan's snare (which does so effortlessly); in fact, I think the duo combo is a little odd in that regard. But I walked west on 155th St (you can see the railing over the space on the left in the photo above) several hundred feet until I could no longer hear the saxophone, then slowly walked back, enjoying its emergence among the general noise.

Very nice evening. Hung around for the post-show watermelon and picked up the LP of Sean and Tamio recorded by Dugan, "Summer Concerts", consisting of similar events from 2002-06. (excellent stuff)
Posted by Brian Olewnick at 8/19/2007 09:40:00 AM

nice, sounds like fun. Yuko and I couldn't quite motivate after a huge lunch. such a nice day, though, shame the Bronx is such a trek from Jersey City.

"Geoff most recently was in the news for the release of his recording of orchestral tune-ups, "Favorite Intermissions"."

Ah, it's Geoff's label then? I was misinformed (or, more likely, misunderstood).

Blasting Ligeti in both directions

Hey, arboghast, enjoy your site a bunch. Keep it up.