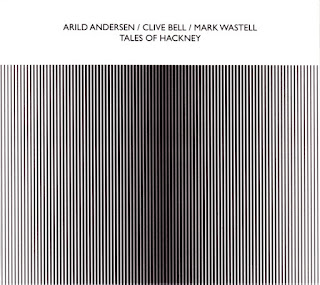 I had to chuckle when I first put on this disc. I knew and greatly enjoyed Andersen's work in Jan Garbarek's early groups and, even earlier, when that group was nestled into George Russell's large ensembles, but I'm pretty sure the last time I heard him was on Roswell Rudd's 'Flexible Flyer'  (1975). Nonetheless, when those initial bass notes rang out on the first track here, there was no one  else it could have been. When swiftly joined by Bell's khene (a Thai mouth organ) and Wastell's deft cymbals, it ushers in this delightful and unexpected release that, among other things, seems  determined bring a fresh take on the kind of music heard on those early ECM sides, before the label became awash in pastels. No easy task, but this trio manages to generate  a lush, more or less tuneful set of pieces that retain just enough edge to skirt any concerns. Andersen employs electronics as well, creating washes of dense tones, again not altogether too comfortable and melding well with Wastell's shruti box while Bell ably navigates from khene to shakuhachi to pi saw (a Thai flute) to shinobue (a Japanese transverse flute). Spacey sections that avoid gauziness, instead focussing on laminal textures, always with ample grain or tinges of harshness, near-melodies that are pastoral and even meditative while utterly avoiding the lassitude and shallowness all too commonly encountered in this general area. And Andersen is a joy to hear throughout, such a great sound. Not only a very enjoyable release but a surprising and refreshing approach to even consider these days (recorded in  2017)--a wonderful recording. 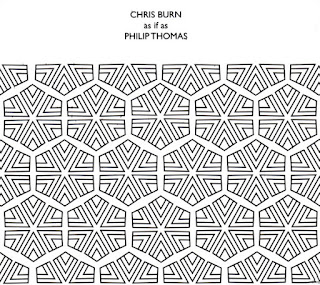 Chris Burn/Philip Thomas - as if as (Confront)

A set of arrangements for piano by Burn, played by Thomas, including six brief pieces transcribed from guitar improvisations by Derek Bailey.

The first compositions, the title track and 'only the snow', are spiky, dense and complex works, with intriguing senses of fragmentation and silences (especially the latter), tending toward the higher registers and evoking, to these ears, something of a more spatially concerned Nancarrow. Initially  forbidding, they grew on me with each subsequent listen. I should point out that there's some confusion with regard  to track listings involving a mistaken pressing and  a corrected one; I'm going by my ears and the listing on my copy, though I'm not convinced I'm correct.... What are listed as the Bailey transcriptions (from his 1991 release on Incus, 'Guitar Solos Volume 2') are a different  matter. As odd as it may seem, they're immediately in more "comfortable" territory, almost gentle, quite introspective sounding and lovely; this is  an aspect that leads me to think that some of the four 'pressings and screenings' pieces  are mixed in  here, but whatever, it's excellent music. The pieces range from that kind of Webern-ish spatial pointillism to only slightly softer, more (relatively) lush environs, always with a firm sense of structure and not nearly as claustrophobic as I might have expected. As ever, Philip Thomas exercises both precision and touch, injecting vast amounts of vigor into the proceedings. My knowledge of Burn's oeuvre is fairly limited but this is easily my favorite recording of his work yet. Highly recommended. 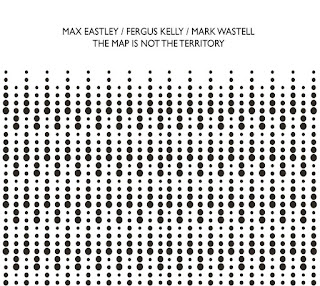 A flowing set of eight improvisations where the trio (Eastley, arc [an electro-acoustic monochord]; Kelly, invented instruments, found metals, electronics; and Wastell, tam tam, metal percussion, piano frame) concentrate almost exclusively on long tones including, one suspects, much derived from bowing. Unlike many an arco-cymbalist, however, the sounds achieved here aren't overly harsh or strident, though also maintaining a safe distance from the blandly mellifluous. There's an expansiveness in play here, perhaps less liquid than sandy, smooth but not without granularity. A kind of serenity that allows for mild discomfort and itchiness, even venturing into otherworldly-seeming territory, as in 'Seizure of Light'. The tracks are of a piece but differentiated, like leaves from the same tree. This all sounds vague, I realize, but it's difficult (for me) to capture kind of flow heard here without getting too sappy about it. Nothing sappy about the music--it's lovely on a sensual level and engrossing to contemplate. Fine work. 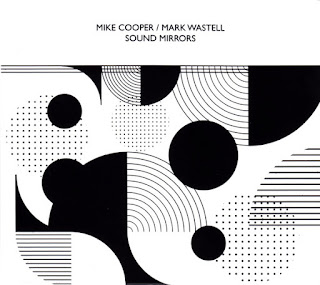 Cooper's always been a tough musician for me to get any kind of stylistic fix on, likely my shortcoming versus his complex slipperiness. There's the free improviser, of course, but also the fellow who nods to Hawaiian slide guitar, acoustic blues among other necks of the woods. Here, on lapsteel guitar and electronics in six pieces with Wastell (tam tam, percussion, shruti box), one hears tinges of all of these and others. The mix of guitar and tam tam is especially appealing here, metal strings and brushed or stroked metal--very nice. There's a fine billowy feeling  throughout much of the work though on occasion, as in 'Warden Point', the electronics gets more in-one's-face and a tad loopy. Parts of 'Joss Gap' nod to dance rhythms of a sort, creating an interesting an unusual kind of tension, in the context. Using one's imagination, you can almost summon up images of the sound mirrors referenced in the album's title (we've all seen these, yes?). An intriguing piece, gnarly in ways one doesn't often hear; Cooper's guitar toward the end is an unexpected easter egg. It doesn't always work--there's a bit of oil and water here--but when it does, which is often enough, 'Sound Mirrors'  offers some delectable flavors.

I'm glad you can finish the recording well, Roswell Rudd's 'Flexible Flyer' provides something interesting for all of us. thank you for the information

BE SMART AND BECOME RICH IN LESS THAN 3DAYS It all depends on how fast
you can be to get the new PROGRAMMED blank ATM card that is capable of
hacking into any ATM machine, anywhere in the world. I got to know about
this BLANK ATM CARD when I was searching for job online about a month
ago It has really changed my life for good and now I can say I'm rich and
I can never be poor again. The least money I get in a day with it is about
$50,000.(fifty thousand USD) Every now and then I keeping pumping money
into my account. Though is illegal,there is no risk of being caught
,because it has been programmed in such a way that it is not traceable,it
also has a technique that makes it impossible for the CCTVs to detect
you. For details on how to get yours today, email the hackers on :
atmmachinehackers1@gmail.com Tell your
loved once too, and start to live large. That's the simple testimony of how
my life changed for good. Love you all . the email address again is
atmmachinehackers1@gmail.com