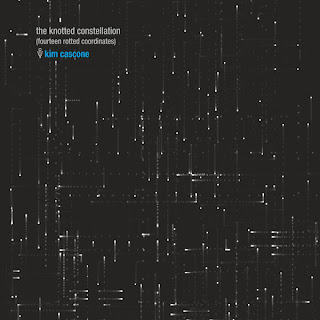 A cascade of Cascone (c'mon, you know that's hard to resist). Field recordings and contributory gauze from other individuals forming a kind of sound that's at a remove from that heard in areas I more typically traverse. I hear more of an association with the classic tape manipulators like Raaijmakers, for example, than Tsunoda. The sounds--and there are zillions of them--sound chiseled, often crystalline, each buzz, rattle 'n' hum distinct. For the listener, this sets up a certain kind of distinction, something like Rothko vs. Hoffmann, an aspect that strikes me as somehow fundamental (it may not matter so much to others). The sounds carry greater independent weight, are less easy to integrate into the whole so that when one hears, for instance, what sounds like the croaking of a decent sized monkey some ten minutes in (I could be entirely wrong on this classification!), one hears it as more apart from its sound bed than one is used to, This isn't a bad thing, of course, and is in my opinion to Cascone's credit that it feels challenging, as though asaying, "OK, deal with this." You can't relax in your comfort zone as easily as you can elsewhere. It's not all harshness by any means; bells and water abound, each again having that etched, photo-realist quality. It's only 33 or so minutes, but it's as chock-full o' nutty sounds as anything you're likely to hear this year. 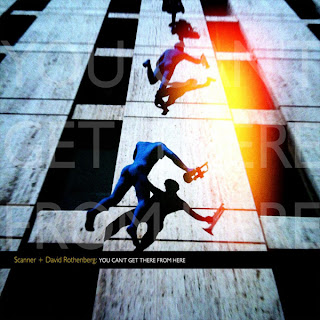 Scanner/David Rothenberg - You Can't Get There from Here (Monotype)

Jolting flashback to the mid 90s when Scanner was one of the cooler things around, the notion of intercepting live phone transmissions and integrating them into improvised electronica seeming pretty damned awesome. Well, that didn't last (for this listener) but here's Scanner (Robin Rimbaud) again with David Rothenberg (bass clarinet, clarinet, laptop). no eavesdropping in sight. My immediate referent on the first track, a laid back, coolly funky one, was the fine mid 80s collaboration between Hector Zazou and Bony Bikaye. It's pleasant but lacks that same fire. Unfortunately, that's about as good as it gets, the remainder toned down to a druggy flux, replete with whispered (presumably sampled) vocals, a woozy, gurgling bed of electronics and meandering clarinets. Suave but not my cuppa. 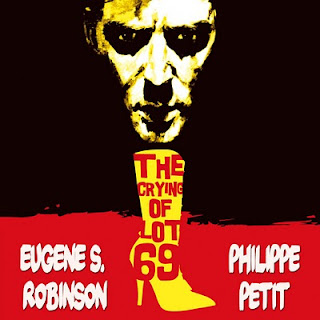 Heh...excellent cover. And I liked the disc as well, an extended text with accompaniment created by Eugene S. Robinson, a writer with whom I was unfamiliar who seems to specialize in 21st century noir (Bouncer Lit?) though here there's an at least superficially obvious connection to Pynchon, and Philippe Petit, who wields electronics, recordings, guitar, etc. Rhys Chatham makes a notable, Cherry-like appearance on trumpet on the first track, btw. Robinson's voice travels from the coolly disinterested to the verge of hysterical breakdown, narrating an ambiguous series of hazy vignettes involving...well, it's never quite clear but there are antagonisms, questionings, rough stuff. Petit's setting, which might loosely be described as "dark ambient" appropriately allows the voice to remain front and center, accenting the dialog instead of demanding attention, leaving an effective and disturbing "story", Lynchian in its dystopic, oneiric aspect. Very good of its kind. 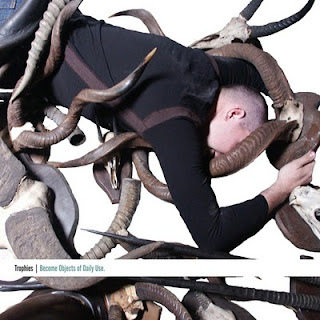 Trophies is Alessandro Bosetti (voice, electronics), Kenta Nagai (guitar) and Tony Buck (drums) but fall easily in line with recent work of Bosetti's. Veteran readers know I've had my share of problems with his work and, sad to say, they continue here. As in prior releases he reads text in repeated fragments over a loosely rockish backdrop that, again, uncomfortably recalls Scott Johnson's late-80s work in the "John Somebody" mode. The iterated vocals, often tracked sound for sound by electronics (which I find seriously tiresome) wear thin quite quickly and the accompaniment, while handsome enough, also reminds me of the busy work that, for example, the Cline brothers produced in that ill-fated Hemphill band from around the same period as the Johnson. The same approach is followed on all eight tracks (expanding a bit into a quasi-Carnatic area on the final one, but too late).