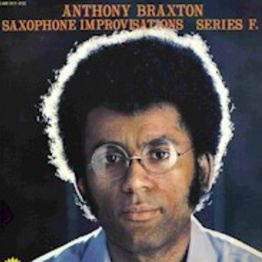 Recorded in February 1972, "Saxophone Improvisations/Series F" is the next solo Braxton in my collection and, more so than "For Alto", makes a move into the cataloging of attacks that he'd engage in more and more frequently. Really a very fascinating approach at the time, imho, the isolating of the hundreds of possible approaches in a really rigorous fashion, concentrating intently on one basic attack and seeing what you can find. He's not as explicit about that here as he would be on subsequent recordings, but you do get the sense that there's little wandering about, that each track is tightly focused on a small area although, of course, that area probably doesn't turn out to be small at all. btw, I have to say how utterly cool the album title was back in the day. You just didn't get such (quasi) mathematical phrases like "Series F" every day. You just knew this fellow was up to something serious.

The short triad of pieces that opens the album (I have the 1976 Inner City release; I know it's been reissued with an additional set of compositions) is dedicated to Bobby Fisher [sic] with the parenthetical comment, "If Fisher wins the world championship I will add another stage. If he loses I will take off a stage and give it to someone else..."

The sidelong piece on Side Two, JMK-80 CFN-7 (Composition 26B per Martinelli's Discography) is one of Braxton's finest, a raging but precise storm wherein he engages in a bunch of amazing...not sure what you'd call it-hocketing? Where he rapidly alternates between higher and lower notes, giving the impression of two separate lines, all the while maintaining a ferocity level you'd be hard-pressed to find anywhere in the jazz scene nowadays. 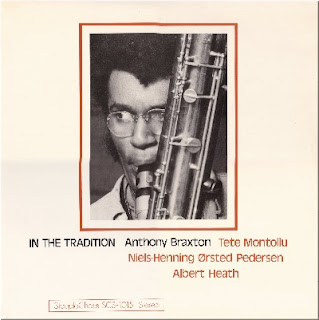 I see that there's a two year + gap between Brax recordings among my vinyl and, consulting Martinelli, find that he only (as leader) recorded a couple of things in this period (at least as existed when the discography was compiled around 1999) none of which would've been readily available to me at the time, so it makes sense there'd be a gap. Needless to say, the "In the Tradition" releases--I only have the one volume--caused something of a commotion when released. There was a whole storm of controversy as to Braxton's legitimacy as a jazz musician in the early 70s even though he'd often included standards in concert and on record, and play them in heartfelt fashion. Well, here he was with a pretty mainstream group of musicians playing Warne Marsh (Marshmallow), Goodbye Pork Pie Hat, Just Friends, Ornithology and Lush Life. The pieces where he uses alto are fairly straightforward and fun but it was the two on contrabass clarinet that raised eyebrows. The Mingus, a duo with Niels-Henning Ørsted Pedersen, gets some extremely abstract rumination before, at the tail end, settling into a dark reading of the theme in unison while Ornithology is just a riot. Braxton used to get a kick playing up-tempo bop on the most unwieldy of his axes (this and the contrabass sax) and he does so with gleeful abandon here.

Is there much lasting value? Probably not. Should he have bothered? Well, no, I don't guess so. There's something of the need to "prove" himself to the mainstream jazz world at play here. Of course, he was also piss-poor most of this time so it's hard to blame him for trying to walk that tightrope, especially considering he did have a true love for the music. In any event, it's an enjoyable recording, far more lively and creative than much of the straighter jazz of the era. Always meant to hear more Montoliu but never really got around to it.

Once again, I have only one recoding from a two volume vinyl set, this time "Duo 2" from the Braxton/Bailey concert of June, 1974. Hey, funds were tight back then. Can't find an image of the LP anywhere...Probably saw this one and snatched it up, not having seen Vol. 1. Again, the youthful reader must attempt to imagine a time when Braxton releases weren't as plentiful as...um, latter-day Braxton releases. This was the first Emanem record I ever laid paws on, pretty sure, and only my second encounter with Bailey, the first being the ECM Music Improvisation Company. He still caused me a good deal of trouble then; this was about as abstract as any music I knew in '75, at least as far as improvisatory music was concerned. I recall going back and forth on it, sometimes baffled, once in a while catching a glimmer of what he was about. For a long while, the only other occasion of his music in my collection was on the Guitar Solos Vol. 2 (released in '76 or '77 I think) of which I was always fond, and I didn't really re-investigate Bailey until about 1990.

While listened to these days with the knowledge of AMM's music, the set necessarily feels a bit stuck in that "insect improv" aesthetic, though it works reasonably well on its own terms. There's a decent amount of communication taking place, each musician acceding to the other on multiple occasions. And there are certainly individual moments, such as the end of Side One, where a kind of tonal stasis (many notes, but staying in the same zone) is achieved that's quite beautiful.

Finally, for today (and once more bereft of any locatable cover image--annoying) is the Live at Moers solo recording, originally issued on Ring, from June 1, 1974 (Hey! Out of chronological order; must remedy!) Another very, very strong solo performance in front of, if the back cover photo is to be believed, a pretty large audience. Did Moers regularly draw like that back then? Must be 500 or so people in the photo, clustered tightly together on a hillside and clearly going past the frame. Again, a nice variety of approaches from the screeching to a ballad that sounds as though based on "A Foggy Day" changes, to a staccato boppish piece, to a lightly swirling bunch of tendrils, to a repetitive Kelvin series track, closing with an ultrasonic squeakfest.
Posted by Brian Olewnick at 7/16/2007 10:47:00 AM

Did anybody ever ask Mingus what he thought about Brax's version of "Goodbye Pork Pie Hat"? I'm continually frustrated that none of the "interviewers" of Ornette ever stanch the flow of nonsense and ask him what he thinks of other peoples' versions of his songs. Mingus wouldn't be shy about showing displeasure if he felt that way (as he did regarding Ornette), but I'm not sure that he would completely dismiss it.

I don't recall hearing Mingus asked about cover versions. I do remember, and have recounted before, a hilarious interview on KCR from around '74 where he was asked his opinion on various avant jazzers.

I know I've written this out before (not here,I don't think) but it's worth it, from the same interview.

Q: What do you think of Miles?
A: Miles who?
Q: erm...Miles Davis?
A: Miles Davis?! He's dead isn't he?
Q: Ummm...no?
A: I thought he was dead.
Q: No, he's still playing.
A: Damn. You know, a few years ago I was walking past the Fillmore and the marquee said 'Miles Davis' so I went in. There was some guy on stage with a plug coming out of his trumpet. I don't know who it was, but it wasn't Miles Davis.