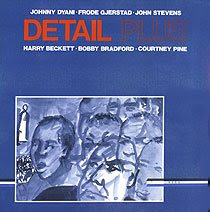 Rifling through the D's last evening. I could never get very much out of this album despite the personnel, and it's still the case, only managing to play through the first of four sides. Heresy to John Stevens fans, maybe, but it's a seriously limp and vacuous effort. And as much as I love Dyani, free playing isn't his forte imho. Much of the blame sounds to me like it falls on Gjerstad's shoulders; I don't know his work otherwise but here he sounds clueless. Didn't get to it this time around, but my recollection is the same for Courtney Pine on the second disc.

Played Henk de Jonge's trio recording on BVHaast next (not Jumping Shark but the earlier one, apparently no longer available) with Ernst Glerum and...I forget the drummer, Breuker sitting in on some tracks. Totally slick and "professional" so, in that sense, inferior to what Detail was at least attempting yet far more successful on its own merits. But no, not so great. 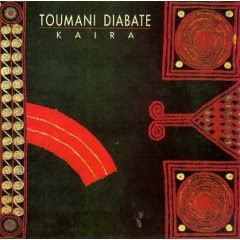 The audio portion of the evening was saved, happily, by Toumani Diabate's 1986 recording, "Kaira", as lovely and graceful as ever. It's the only record of his I own and I take it he's gone on to bigger (better?) things but I haven't heard. Only 22 when this was recorded; impressive.

Looking ahead, I saw a few items that I know I won't have the gumption to spin: Loek Dikker's (wait for it....) "Waterland Big Band Is Hot!" vol's 1 AND 2 from 1979. I was probably looking around for Breuker-ish stuff at the time but, really, no excuse. Then Nick Didkovsky's Doctor Nerve project, "Armed Observation" and a Dirty Dozen Brass Band record (which is probably not too bad).