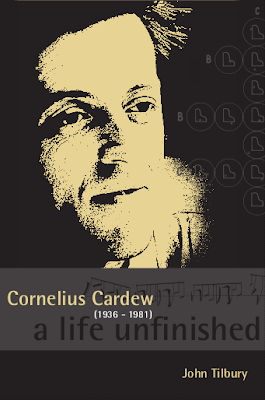 Finished the Cardew biography this morning. That Tilbury's done a monumental, magnificent job almost goes without saying. Lucidly written, well-balanced between opinions that are clearly held by the author and a reasonably objective evaluation of reality. He had three enormous advantages of which I'm certainly jealous: having known Cardew intimately for some 22 years, having a subject who kept detailed journals and being an extraordinary musician himself. The extensive journals can once in a while result in possibly more detailed information than most readers will need but are generally used very well.

I've no desire to critically go through the whole thing (I hope someone does though), but one criticism I've heard is on the great number of words spent on the political portion of his life, his last ten or so years and almost half the book. I don't quite understand the complaint; I would think it comes with the territory if you're doing a Cardew bio. While I'm personally not that interested in the ins and outs of British communist factions (Marxist/Leninist vs. Maoist vs Trotskyite, etc.) I do find such goings on fascinating from a more anthropological point of view, as to the psychologies in play among the various actors, especially given their prior artistic activities in the case of Cardew (and, of course, Rowe). Tilbury, to his credit, doesn't shy away from comparing the kinds of psychologies encountered in political extremism (of any stripe, of course, not merely of the left) to those encountered in religious zealots. (And not just extremists, I would add; you saw the same vapid, slack-jawed, "looking for a leader to show them the way" expressions in the adulatory crowds attending McCain or Obama rallies, similar to what you might find at the most bland Lutheran church service). The Tilbury who wrote the biography, while still retaining an obvious strong sympathy for the cause, is skeptical enough to have been branded a heretical revisionist should he have voiced such opinions in the 70s.

Still, he's remarkably even-handed. There may well be matters on which those who were there, like Keith, saw things differently, maybe felt he left out a pertinent detail, overstressed another, but for those of us too young or in the wrong country, it's an invaluable document. Not that it matters, but I do come away feeling a bit sad about the way Cardew spent his final decade, wondering if things would have changed had he lived. Keith seems to have thought there was a chance, Tilbury less so. I'm not even talking about potential music (and I'm more sympathetic to his socialist and workers' songs than many--at least the musical, not lyric, aspect of much of it), more for his happiness as a person. I get the sense--perhaps I'm reading into it too much--that however he outwardly expressed that he was doing what he was "meant" to do, that the artist, the individual intelligence in him was suffering. But who knows, I could be utterly wrong.

In any case, great job, John, thanks so much.